To be out in nature and gain knowledge that allows you to read the landscape around you like an open book. That was the main driving force when Viktor Gydemo started to study biology and earth science at Umeå University. He now works with water issues at the county administrative board in Västernorrland county. 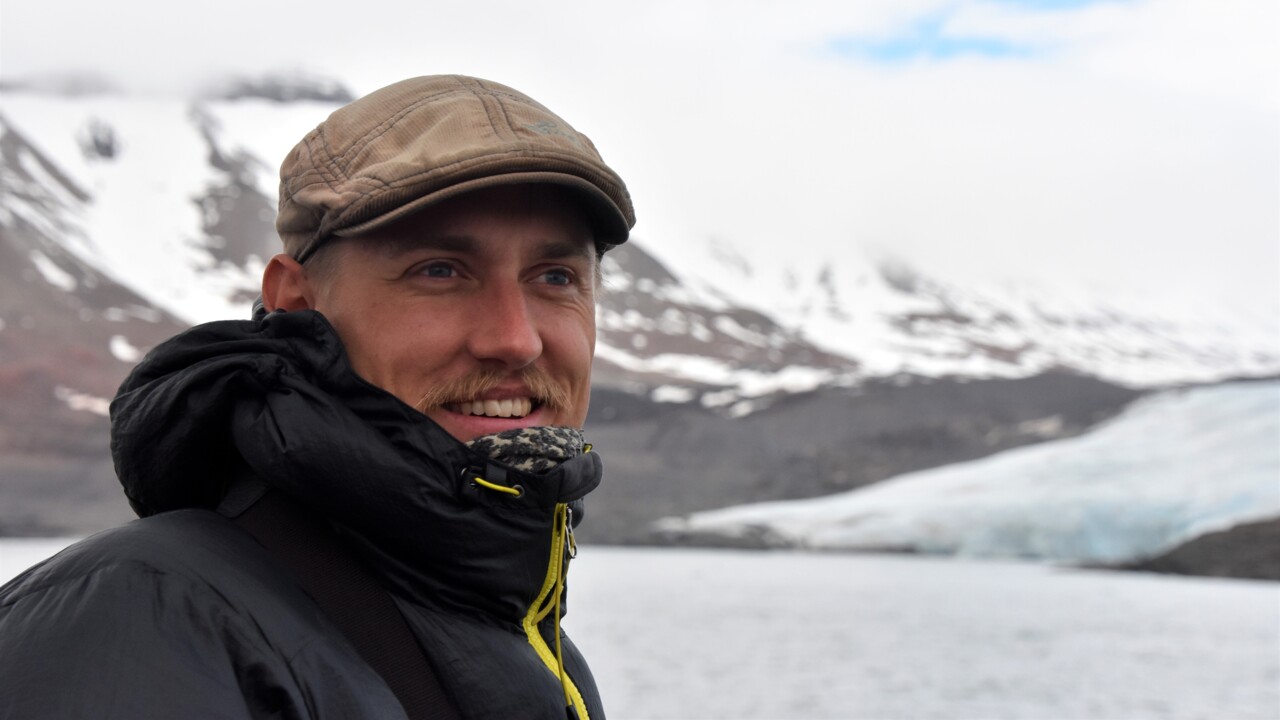 Viktor Gydemo during an excursion on Svalbard. To work on a polar expedition would be a dream job, he says.

“Groundwater is an area that I have become more and more interested in and I slipped into water issues already during my education, he says. In my thesis on the bachelor's programme, I studied sediment distribution in a lake outside Umeå and I wrote my master's thesis in earth science about the connection between river basins and lakes in Greenland.

Since the fall of 2019, Viktor Gydemo has been working on the preparation secretariat at the county administrative board in Härnösand. There he works, among other things, with the EU Water Directive, an assignment that means that all water bodies in the county, from lakes and streams to groundwater sources, should be evaluated at regular intervals.

"We have good water"

“The reason is that we must reach the EU's goal of having good water quality and ensuring the water supply for the future. We have good water in Sweden, but if you start looking at old and new sins that lie in the ground, you realize that there are many sources of impact that must be dealt with. We therefore have a great deal of cooperation with those who work with cleaning of environmental toxins.”

When Viktor began the Bachelor's programme in Biology and Earth sciences, he decided to show his forefront and get to know lecturers and researchers at the department. It provided important contacts that later led to summer jobs as a field assistant in various research projects. Right after his master's degree in earth science, he worked for a while as a course assistant on a course in geographic information systems, GIS. After that followed field work and then a summer job at an environmental consulting firm in Umeå, before getting a job at the county administrative board in the fall.

The best thing about the job at the county administrative board is to work with water issues and to deepen his knowledge in the area further. But, least as important is that he has been well received by his colleagues and has a job that means a lot of freedom under responsibility, says Viktor.

Was it difficult to get a job?
“Quite easy, partly because of the education I received, but it also depends a lot on how you are as a person. I am quite social and it is a lot through contacts with friends and old students that I have gotten my various jobs. But, of course, contacts are not enough. You have to have a basic competence!”
“Earth scientists have generally easier to get jobs than biologists especially if you also have knowledge in water issues. These issues are becoming more and more topical as the hydropower environmental conditions in Sweden will be reviewed in the future. So there will be a lot of jobs in the area and it is great fun.”

Viktor has always liked to be out in nature. He "blames" it on his parents, both are keen on outdoor activities and the family made many trips together and went skiing in the mountains during holidays. The family moved to Gotland, among other things for Viktor's dad to work on building a research station. There Viktor got to hang out sometimes and see how the researchers worked on different projects. 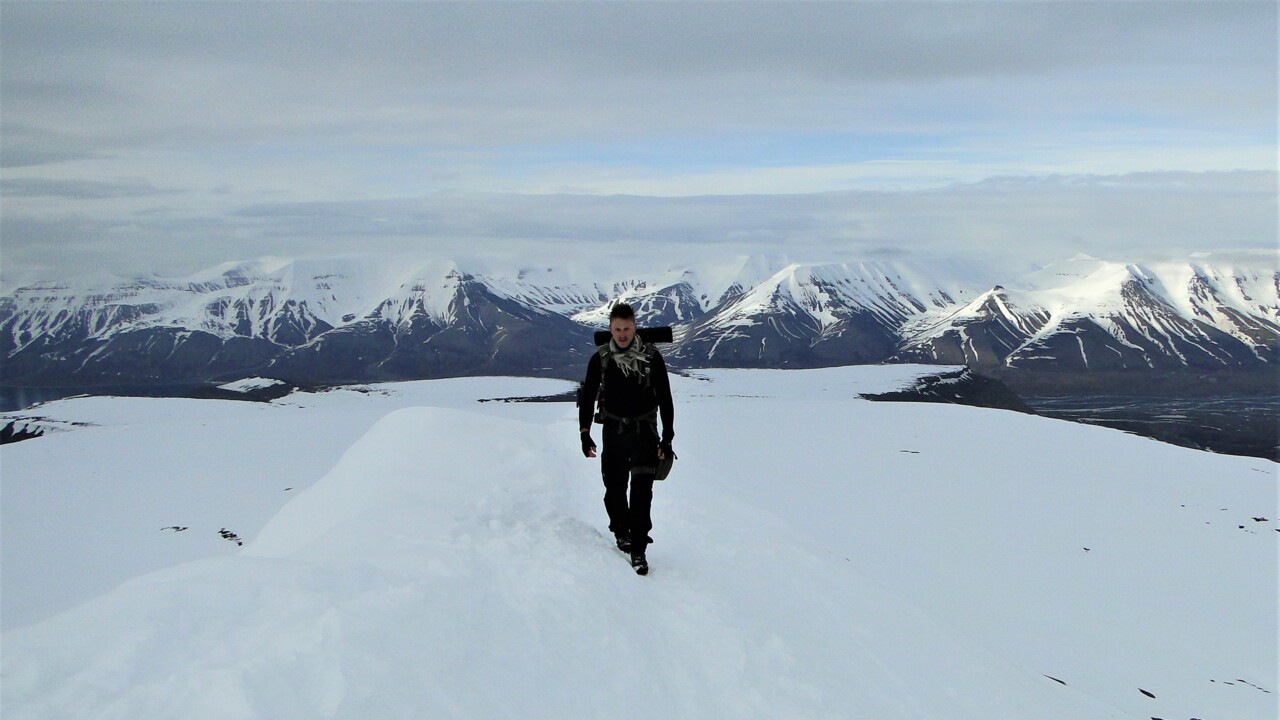 Viktor Gydemo has become more and more interested in water issues. He wrote his master's thesis in earth science about the connection between river basins and lakes on Greenland.

“I went to sailing school in the summers, participated in the naval scouts and later in the naval corps, which is a voluntary defense organization. Being out at sea gives me the same feeling as in the mountains - freedom. I started doing seasonal jobs in the restaurant business so that I could do snowboarding in the winter. I worked winters in Vemdalen, Björnrike and one season in Canada. During the summer, I worked in Gotland and on the West Coast.”

When he got tired of the restaurant jobs, Viktor went on a two-year training as a mountain guide in Åre, organized by Mid Sweden University. It was fun, but in hindsight not really the right thing for him. He soon realised that in the long run he would not want to work as a guide and the education also lacked in quality, Viktor thinks.

“It was not enough academic to be a good academic education and not enough practical to be a really good mountain education. But, I got a degree in environmental science and was able to some courses when I started studying in Umeå. This meant that I was able to study some master's courses during my bachelor and the support from CSN also extended to the master's programme in earth science.

Too little preparation for working life

Why did you choose to study at Umeå University?
“Partly because my dad studied in Umeå and partly because I heard plenty about the education here. I also feel more at home in northern Sweden, you are closer to the mountains and there are real winters.”

Do you think what you studied has prepared you well for the jobs you have had following your degree?
“Yes, I must say. In terms of competence, what is taught is great, but at the same time I lacked clearly directed efforts to show what job opportunities exist after the education. We only got some scattered information and like on the move and we could have happily made more study visits.

In ten years, how do you think you remember your study time?
“Like most people, I will surely forget all the stress and anxiety and just remember it as the most fun time in life. Studying in Umeå was very developing for me, I got to immerse myself in my interest in nature, but above all a lot happened on a personal level.”

“I was very active in the student union at various levels and was a pathological overachiever as a student. With the union there is always too much to do and too few volunteers, so we who did it took on too much. I was about to hit the wall and unfortunately have very few memories from my second year on the bachelor’s programme, because my stress level was so high. Thanks to friends, my then partner and health workers, I managed to get through it without falling over the edge. But, it was a warning sign and if that is something I want to convey to future students, it is to try to take it easy. It's good to get involved, but not too much!”

On the other hand, one should let one's commitment and interest control the choice of education, says Viktor.

“If you want to know more about the world, be able to read the landscape as an open book and be able to go out into a forest and understand why the plants that are there grow right there or why the soil looks like it does, then it is the right education to look for.”

Read more about the Master's programme in Earth Science

Age: 31 years.
From: Gotland.
Lives: in an apartment in Umeå and commutes weekly to Härnösand, but plans to move to Härnösand instead.
Family: single.
Education: Bachelor's programme in Biology and Earth Sciences, as well as the Master's programme in Earth Sciences, Umeå University, graduated in January 2019.
Jobs: Environmental officer at the county administrative board in Västernorrland.
Hobbies: climbing, exercising, socialising with friends, reading, practicing leather crafts, trying to learn programming so that I can use drones to map and do 3D modeling at work.
Umeå with 3 words: Home. Cultural. Atmosphere.
Myself with 3 words: theoretically placed practitioner.
In ten years: I'll be a research engineer on a polar expedition or maybe I work with water issues at an environmental consulting firm.