Pelle Snickars is somewhat of a difficult character to pinpoint. He lives in Stockholm and commutes on a weekly basis to his work as a professor at Humlab in Umeå. Additionally, he also has an apartment in Berlin, where he recently completed a visiting professorship at the Humboldt University.

Holding the interview over Skype is particularly appropriate considering Pelle Snickars is a researcher involved with terms like data housekeeping, digitalism and digital learning. And who is about to, after a flying visit to Umeå, continue to Rome. 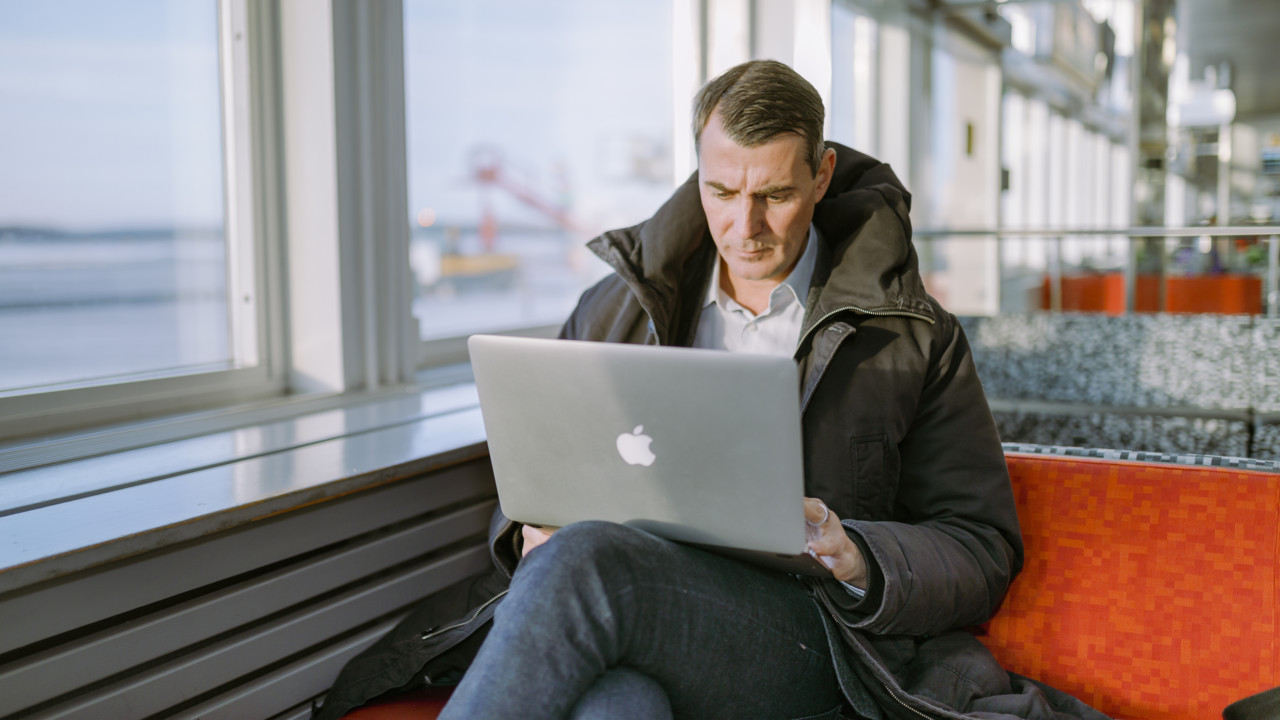 At Umeå Airport. Pelle Snickars spends a lot of time on airplanes. He commutes between Stockholm and Umeå and also has an apartment in Berlin.

"Actually, I haven't been able to entice my wife to come with me to Umeå yet. She is running an architectural firm in Stockholm, so she's currently the one setting the family agenda. Our two girls aren't thrilled about seeing me go so often either, but the weekly commute to Umeå is fine," says Pelle Snickars, who still gets the chance to spend some time at home as he has an ongoing research project in collaboration with cultural heritage institutes in Stockholm.

Previously with the National Library of Sweden and the Swedish Film Institute, and now with the Swedish National Museum of Science and Technology.

'Slight hipster warning', is his description of his Berlin apartment, and that is because he has been an inveterate 'Berliner' ever since his postdoc at the Technical University of Berlin at the start of the 21st century.

Studied Film and History of Science and Idea

Having grown up in Täby, in Stockholm, he took on studies in economic history at Stockholm University in the early 1990s to then carry on with general literary studies and ideas studies.

"The plan was to carry on with studies in history of ideas — I wrote incomprehensible essays about the late Wittgenstein and the Unspeakable — but I needed an extra subject for my degree. I ended up choosing film science, and after that, I stayed at the Film House at the Swedish Film Institute, where I wrote a dissertation on early Swedish film and visual pop culture around the 1900s. Only once, I ran into Swedish film legend Ingmar Bergman."

After completing his dissertation, Pelle Snickars took a job at the National Archive for Recorded Sound and Moving Images (SLBA), which joined with the National Library of Sweden's archive in 2009. They had been two institutes governed by Swedish law to have mandatory copies of practically everything, but were finding it increasingly difficult to handle the growing abundance of multimedia.

"There was a long discussion over the difficulty in keeping the media separate. Already in the mid-1970s, Harry Schein, the then Swedish Film Institute CEO, inquired a cohesive political approach to the area, this instead of yet another film, mass media or press subsidy investigation. Dividing media politics between various departments makes it difficult for the Government to react," says Pelle Snickars.

"To some, this is first and foremost interesting in theory, but for me, it was the archivist's perspective that struck a note."

The challenge of archiving in a digital world

Can we receive and archive the huge amount of information produced? Also the enormous data files created by HD-TV, reality shows and adds? Is it even feasible?

"No, we can't. Often, people think that what is laid down by law is a good guarantee that nothing will disappear, but it can also cause problems," suggests Pelle Snickars and highlights the paradox.

Archives have never saved everything, elimination is key. Without elimination, the law becomes a millstone round cultural institutes' necks that forces them to follow the law, but as a result will not afford to put resources on what is relevant at present, such as for instance blogs and YouTube videos.

"The cultural heritage we end up with is implications of political calls that are unable to handle an escalating technological happening. Unfortunately, discussions on digital material are few, despite being such an important topic not least for research in arts and humanities, and social sciences. How will we interpret our past time in a hundred years?"

Snickar's contribution was removed from the Media Inquiry

What has resulted in more discussion is the crisis in the private media business, at the same time as Swedish Television invests a lot into web material. Still, the directives of the governmental Media Inquiry did not include looking into public service.

"That was kind of odd. So, the Government adds nine billion SEK in media subsidies, of which eight go to public service — but they weren't included in the Media Inquiry. When the media industry — which really and truly is a lobby organisation — got in touch, I found political bodies cowardly for not having handled it," says Pelle Snickars.

But the Media Inquiry did not take kindly to the same researcher partaking in both the governmental investigation and the parallel trade commission of public service.

The future of Public Service

That is why, in the end, he is listed as co-author 'only' in the industry funded public service commission. A report that among all suggests reducing support to public service institutes in aid of a public service fund, to which others can apply.

"That's actually similar to a proposal in the Media Inquiry, so I have no issue in supporting it, although it's rather 'uninstitutional'. Already at present, loads of programmes on Swedish public service TV and radio are produced by commercial companies. A suggestion would for instance be to expand digital services for on-demand media consumption with lots of more material."

Pelle Snickars makes a comparison to a library; is it primarily a premise or a function? Is public service a number of institutions housed in a few closely situated buildings in the Swedish capital — or a function that the citizens should be granted access to?

Going from well-defined media types such as a newspaper or a broadcast media channel to a more diversified and personalised accumulation of content causes problems — which Snickars' contribution to the Media Inquiry bears witness of.

"The original idea derived from the web critic Evgenij Morosov, namely the view of user data as capital. We consume an increasing array of intellectual products — streamed music, web news, etc. — and it's reasonable to think that the use will only increase. The handling of user data is already a multi-billion industry."

How do we citizens gain power over our user data? Pelle Snickars draws parallels to the conflict between environment and growth.

"It's a paradox: How can new companies and services develop with increasing restrictions? And if everyone disconnects, we have no development to speak of."

On the other hand, development might take us somewhere completely unexpected. The Internet may not have been that silver lining we had all hoped for.

"I've always seen the volatile abundance of the information universe as an opportunity. It might develop into something else; 'the malignant Internet', through which we can never reach each other? Although, trying to solve the problem through governmental regulations is probably not feasible. With a humanities view on things, it's also to be expected that issues will be complicated. It's often difficult, even to the researcher, to establish what is right."

Pelle Snickars works full time with research. With several large research projects, project management, carrying out own research, and supervising doctoral students, his time has not allowed for education on undergraduate level, although he would have liked to. 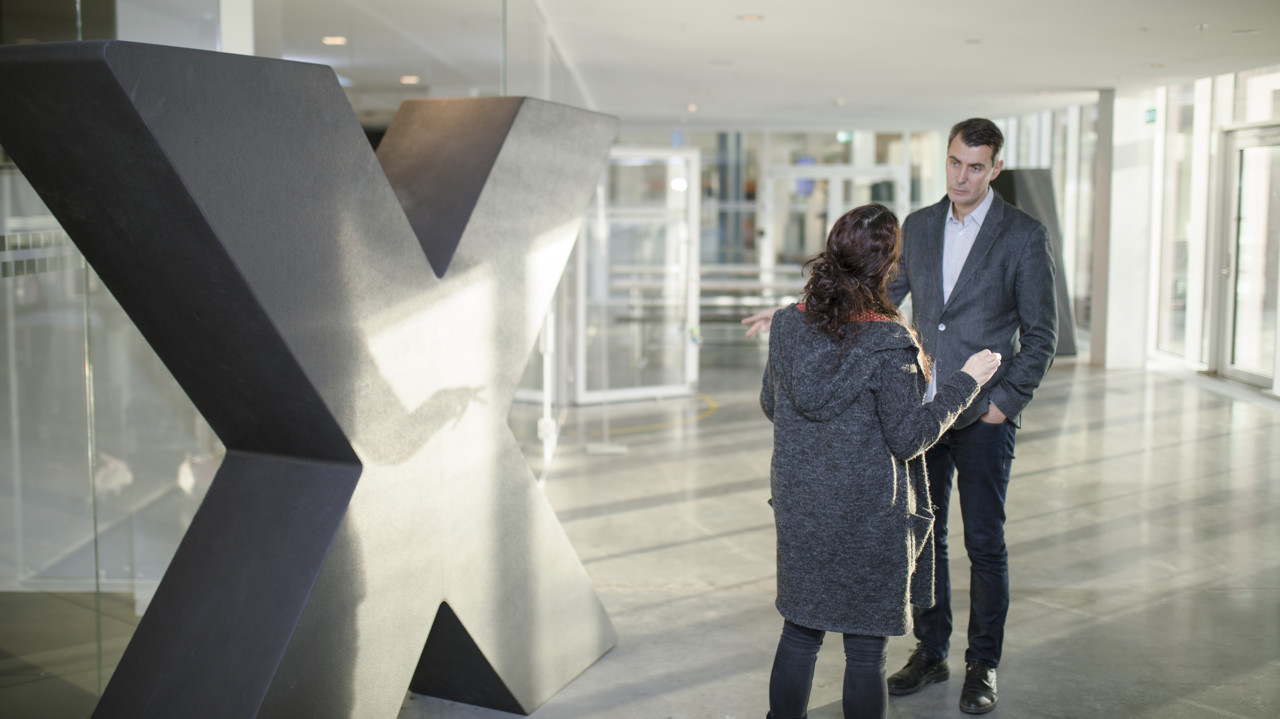 Pelle Snickars at his workplace Humlab-X on Umeå Arts Campus.

The fact that his workplace Humlab over the last few years has gone through a number of changes, resulting in a more narrow focus on research, has not disrupted Pelle Snickars' ongoing projects.

"On the contrary, Humlab is and will no doubt be the best Swedish environment for research in digital humanities and was the main reason I wanted to come to Umeå University. The infrastructure is amazing — and the developers and programmers are even better. Technologically oriented scholars in Arts and Humanities in Sweden would give their lives to have the equivalent of Humlab. And Umeå University has two!"

This article was first published in the magazine Aktum no. 1 2017.

Age: 45 years.
Does: Professor at the Department of Culture and Media Studies and Humlab.
Hobbies: The family, reading and weightlifting (on a good day, I can bench press 100 kg).
Latest book read: Currently, lots of American content: Colson Whitehead's The Underground Railroad (about slavery and a successful flight) + John Williams' Butcher's Crossing (about a badly executed buffalo hunt).
Last seen on TV or film: Manchester by the Sea (about male crises).
Listens to: Melanie De Biasio (captivating Belgian Electro Noir Jazz).