Deadly vitamin deficiency in the sea

FEATURE Salmon, eider, gulls. These top predators in the marine food web, and possibly more, are deficient in vitamin B1, or thiamin. Vitamin deficiency has serious effects on survival and reproduction. But why does the problem arise?

To find the underlying cause of this problem, Emil Fridolfsson, researcher at Linnaeus University, has focused on the base of the food web, where it all begins. In December 2019, Emil defended his doctoral thesis on thiamin in the aquatic food web.

Thiamin is one of eight B-vitamins, known as B1. It is an essential vitamin for all animals, and has an important function in metabolism of carbohydrates and proteins. However, animals cannot produce thiamin themselves; they must get it through their food. Thiamin is also water-soluble, which means that storage is limited. Animals must therefore have a continuous supply of it throughout their lives.

Reproductive disorders in salmon were discovered over 45 years ago, causing major problems with high fry mortality. It was not until the mid-1990s that researchers identified thiamin deficiency as the cause of these disorders.

In fish farms, the yolk-sac fry could be bathed in thiamin, which restored survival to normal levels. However, the problem was recurring, and explanations for this vitamin deficiency remained a mystery.

For many years, research focused on the top of the food web, where the effects were most evident. Could the explanation be found in changes in the salmon’s diet?

Salmon mainly feed on planktivorous fish such as herring and sprat, which differ in the amount of thiamin they contain in relation to fat and energy. Researchers considered that changes in the balance of a salmon’s diet between these two species explained the resulting vitamin deficiency. However, the direct link between those changes and the symptoms of thiamin deficiency was not straightforward. Finding an explanation and a solution to this question required starting at the source, where the flow of thiamin in the food web begins.

The thiamin found in the aquatic environment and organisms have been produced by small microorganisms, mainly bacteria and phytoplankton. Not all species have the ability to produce thiamin; some must absorb thiamin from the surrounding water. However, the concentrations of thiamin in seawater are very low, many times below the detection limit.

The key role of phytoplankton

Thiamin-producing phytoplankton plays an important role in the ecosystem. They constitute food for zooplankton, and thus incorporate the essential thiamin into the food web. Thiamin content varies widely between different species of phytoplankton, which means that the phytoplankton community composition plays a crucial role in how much thiamin will be available for animals at higher levels in the food web. The availability of thiamin may also vary between different types of phytoplankton. This fact is the key to resolving the problems with thiamin deficiency. If the composition of species changes, it can have major consequences for the animals at the top of the food web. 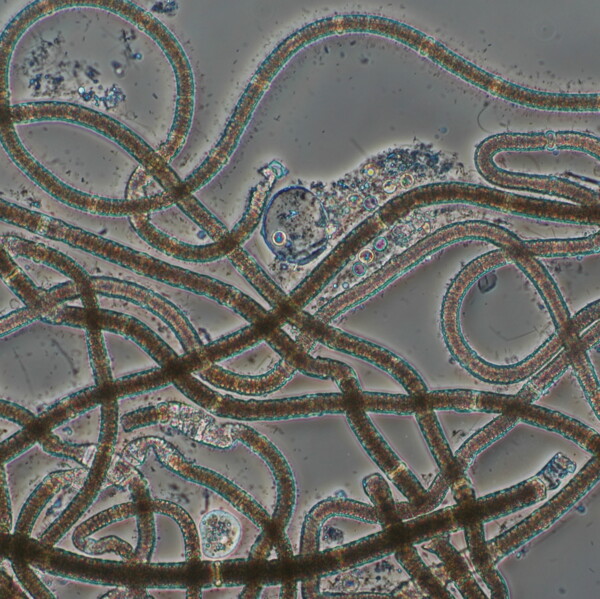 Microscope image of the cyanobacteria Nodularia spumigena.Filamentous cyanobacteria have the highest concentrations of thiamin, but they are a low-quality food for zooplankton

There is a tendency for smaller individuals to contain relatively more thiamin. This has been shown for zooplankton as well as for blue mussels. At the same time, a shift towards smaller phytoplankton appears to pose a greater risk of thiamin deficiency at the top of the food web, due to a less efficient transfer from small picoplankton to zooplankton.

The cause is still not clear

Various theories have been presented in the past about what causes thiamin deficiency, and connections have been made to, for example, how much planktivorous herring and sprat there are. These species’ content of thiaminase , an enzyme that degrades thiamin, has also been discussed.

The article has earlier been published in the EcoChange annual report 2019. The text is based on the following doctoral thesis: