FEATURE In the Gulf of Bothnia there are areas that have been heavily burdened by industrial activities, and where the bottom sediment contains a variety of environmental toxins. The problems with polluted sediments are well known, but how toxic are they?

To find out, it is not enough to measure which chemicals are in the sediment. The toxicity and effects of individual substances on the ecosystem may be relatively well-known, but it is much more difficult to assess the so-called cocktail effect, i.e. the effect of mixtures. Is one plus one always two, or can the combinations of different substances increase or decrease toxicity?

A group of EcoChange researchers investigated the sediments from Kramfors, Örnsköldsvik and Sundsvall. The areas are in the Bothnian Sea, and have a long history with sawmill industry, pulp industry and other industrial operations. The sediments within these marine areas are heavily burdened by various environmental toxins. To get a picture of the sediment's potential impact on the ecosystem, the researchers used newly fertilized zebra fish embryos. 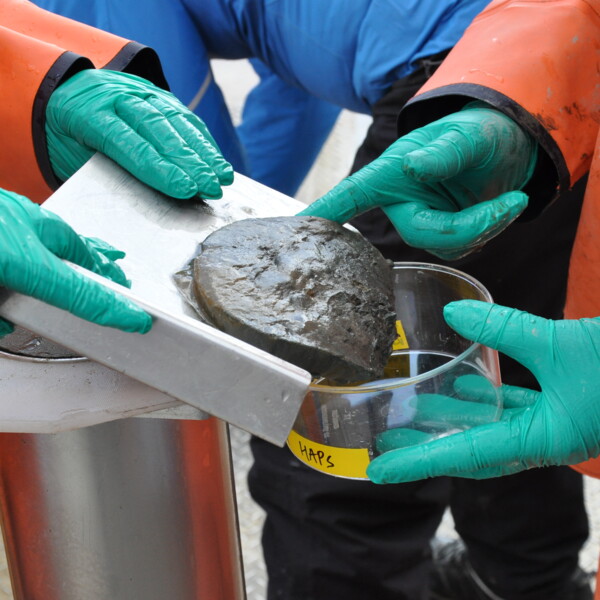 The sediments of the seabed serve as large sinks for a variety of environmental toxins.

The aim of the study was to investigate how much information about toxicity and effects can be obtained by using the so-called FET method. FET stands for Fish Embryo Acute Toxicity Test, and has been developed as an alternative both to the commonly used AFT (Acute Fish Toxicity Test) method and to performing cell-level testing. A common FET involves using zebra fish embryos, following the OECD 203 recommendations.

The embryos are exposed to testing conditions, and are followed closely for four days. During the the test, the embryos develop hearts and basal motor functions. In addition to measuring survival, one can also measure effects on the heartbeat, morphological changes, and certain behavioral changes. The method is fast and relatively inexpensive and can provide information on effects on more complicated organisms, which cell-level testing cannot.

This type of toxicity test provides opportunities to get a more nuanced picture of the effects on the ecosystem. In addition to measuring mortality after a certain period of exposure, it is possible to measure a number of other factors, such as coagulation of the eggs, morphological development and heartbeat. Neurological damage, morphological malformations, and changes in behavior can provide important information about effects not only on individuals but also at the population level.

In this study, fish embryos were kept in sediment solutions from the different areas. The sediments were also analyzed for, among other things, over 200 organic pollutants. The effects that emerged among fish embryos were then linked to various compositions of environmental toxins. These analyzes showed that the sediments from Kramfors had the highest environmental pollutant load of the three areas. The Kramfors sediments also contained much higher concentrations of PAHs, while the sediments from Örnsköldsvik contained pesticides against fungi and insects.

Some effects occurred in all areas, while others were specific to one of the areas. All embryos exposed to Kramfors sediment developed curved spines and slow, spastic movements. A decreased heart rhythm was detected in tests from all three areas, although the effect was most evident in the Kramfors sediment test.

The article has earlier been published in the annual report EcoChange 2019. The text is based on the following scientific publication: