FEATURE Species diversity may not generally be expected to increase as a result of climate change, but this appears to be the case in some northern shallow coastal areas of the Baltic Sea. In a thorough study of the basal production in the food web shows a shift in the balance between phytoplankton, mixotrophs and bacteria. A balance that changes as a consequence of climate change.

The very smallest organisms in the sea have a fundamental role in the marine ecosystem. In a drop of water, we find large quantities of virus, bacteria, cyanobacteria, phytoplankton and mixotrophs. Some of them can fix carbon dioxide and sunlight and convert it into organic matter. Others can break down dead organic matter, and make the nutrition and energy available to the ecosystem again. 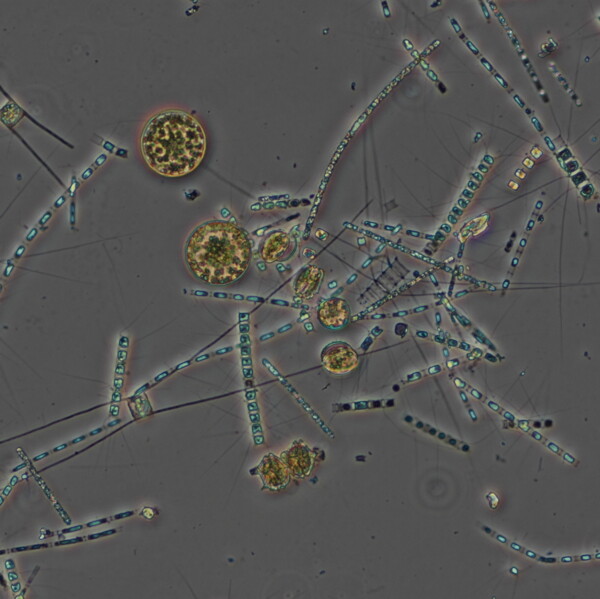 Spring bloom of phytoplankton in the Bothnian Sea.

Phytoplankton are autotrophs, which means that they can produce organic matter from carbon dioxide in the atmosphere and sunlight, i.e. photosynthesis. This process, also known as primary production, is the dominant way of incorporating new carbon and new energy into the ecosystem. Marine phytoplankton contribute half of the world's primary production.

Both plant and animal

Mixotrophs are both animals and plants at the same time - they can both photosynthesize and eat other organisms. Under special conditions, they seem to be able to out-compete both autotrophs and heterotrophs, as they can utilize light when available and take up organic compounds present in the water. The competition between autotrophs, heterotrophs and mixotrophs provides a balance between the different types of organisms. This balance can easily be disrupted when conditions change.

Since mixotrophs can combine photosynthesis with, for example, eating bacteria, they can gain a competitive advantage when nutrition and light conditions are poorer.

The growth of microorganisms varies during the year and among water ecosystems. In the spring, the water is cold, and the conditions favor large species of phytoplankton, such as diatoms.

When the nutrient supply in the water is depleted and the water warms, smaller plankton will benefit. These may be autotrophic, mixotrophic or heterotrophic. Their small size gives these tiny plankton a competitive advantage - they have a larger area in relation to their volume than the larger phytoplankton.

The shallow coastal areas in the northernmost parts of the Baltic are more like humus-rich lakes than sea areas. Unlike marine areas further south, these areas are phosphorus limited, just like many lakes. The water that flows into the sea from land is brown, due to the large wetland areas in the catchment. The brown color is detrimental to the phytoplankton, as it worsens the light climate. The bacteria, on the other hand, benefit from the large amount of organic material that comes with the water.

A group of EcoChange researchers has done a thorough study of which parameters influence the balance between different microorganisms in a shallow coastal area in the northernmost part of the Baltic Sea. The study shows a succession that differs to some extent from what has been reported in previous studies. The results indicate, for example, that species diversity may increase in these shallow coastal areas, which in turn leads to a more efficient use of limited resources, and thus a higher total production.

The study shows that mixotrophs also seem to benefit from the poorer light conditions, the high levels of dissolved organic matter and the specific nutrient conditions. The mixotrophic flagellate that dominated was Chrysochromulina spp. The mixotrophs were found to play an important role in the food web in the area, and their importance increased as bacterial production increased.

Results show that succession during the year in these areas differs from farther south in the Baltic Seas. The amount of dissolved organic matter in the water is high in the spring,. The bacteria predominate at the beginning of the season, while autotrophic phytoplankton predominated later in the summer. Primary production proved to be highest during the hot summer months, when flow from the rivers is low. These results show major differences between shallow, northern coastal areas and the Baltic Sea.

The article has earlier been published in the EcoChange annual report 2019. The text is based on: