FEATURE Happy students, families, friends, prominent guests, representatives from major companies filled the Project Studio at the Umeå Institute of Design when UID19 took place in early June. At this year's event, visitors were introduced to a series of innovative grad projects, ranging from forest fire fighter equipment, to sneakers, to apps, to hospital robots and even flying cars.

It's Tuesday morning at the Umeå Institute of Design. Today, it's graduation day. The students are putting their final touches on their models, while at the same time cleaning up in preparation for the Degree Show. The atmosphere is calm, yet tense. The UID19 Design Talks & Degree Show kicks off in a few hours. In the open stairwell in the middle of the school stands a group of students chatting as they wait in anticipation for various meetings with companies such as BMW, Electrolux, Atlas Copco, Lufthansa and Google.

Just like in previous years, the graduation event at UID involves an exhibition of all the projects that the students have developed while sketching, toiling in workshops and creating 3D animations animations on their computers. The examination process also includes the students presenting their projects in brief three-minute talks in front of the main event audience. On the first day of the event, there are close to 300 audience members in the school's Project Studio. Of course, there is nervousness, but students have been giving numerous presentations throughout their educations in preparation for real life work situations.

- I have had some absolutely fantastic years here at the school. I am not the same person as when I came here. As for UID19, we have been living with our various projects throughout the entire spring semester, often around the clock, so it feels incredibly nice to have reached the conclusion here today. After the event I will first take summer leave and rest, then I will look for jobs, in Sweden or in other parts of the world. We will see what the future holds, says Frida Stenlund. 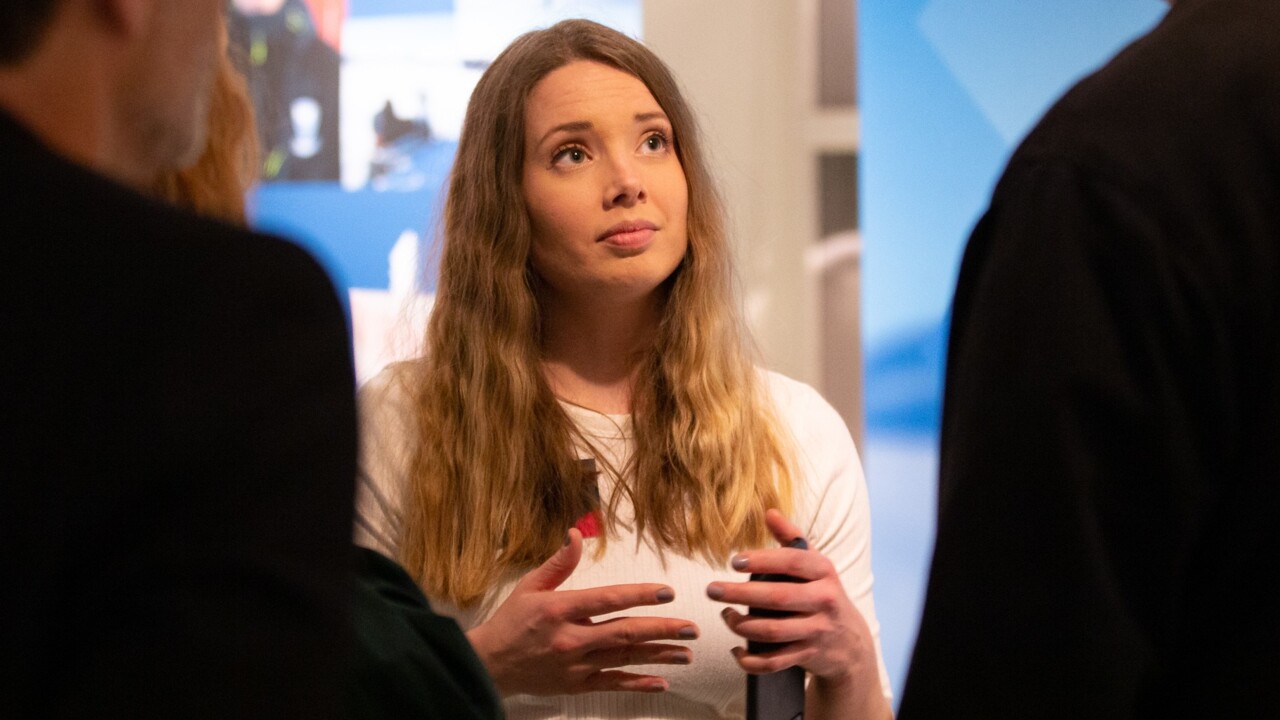 In her project she presents a series of solutions to facilitate the adaptation for people who come to live in a new country. The service, Navi, is an app that translates spoken language into text or sound in the recipient's language in real time, which can be used, for example, during the visit to the bank or in the coffee room at work. The technology also includes functions with the explicit purpose of matching newly arrived persons with potential employers. The idea is that with the help of the technology one should be able to take advantage of the unique special competence that the migrant possesses and accelerate the individual's establishment process through their working life. The package solution also offers coaches who assist the newly arrived with cultural and linguistic adaptation, which can be extra important, for example, at a new workplace.

- If the individual speaks exclusively Russian, for example, there is also the possibility in the system to connect you with other Russian-speaking people who may have come further in their integration process. This facilitates the opportunity for the newly arrived to find social connections, jobs, professional networks, and to enter the community in a good way, says Frida Stenlund.

For Frida Stenlund, the most important thing about design is to create meaningful benefits for people and society as a whole.

- Design is not just about colour and shape, even though they are important components. As a designer, I really want to make a difference and do important things for people, affect their lives in positive ways. Many of us will travel out into the world after graduation, which I might also do. But with the skills that exist here at UID and in the city of Umeå, I can see future opportunities to return here, as a professional designer.

Many of us will travel out into the world after graduation, which I might also do. But with the skills that exist here at UID and in the city of Umeå, I can see future opportunities to return here, as a professional designer.

Frida Stenlund's class mate Pontus Edman has, in his thesis work, called attention to a problem concerning mass rescue operations at sea, which are often marred by chaos. For example, when a ferry with hundreds of passengers is damaged and starts to sink, time is of immense importance. When the rescue operation arrives at the scene of the accident, it is often unclear how many passengers are in the water and, moreover, the emergency services lack a clear overview of where the passengers are. Therefore, it is difficult to structure the work to get passengers out of the water as quickly as possible, which can ultimately lead to loss of human life.

- These are extremely difficult rescue missions that involve a great deal of complexity. In addition, they often occur in the dark and in difficult weather conditions. Looking for people in the water under these types of conditions is like looking for a needle in a haystack, says Pontus Edman.

In order to facilitate the rescue operation, he has - in collaboration with the Swedish Maritime Administration and Sjöräddningssällskapet - developed a GPS tracker that is built into the life jacket. The transmitter that is activated when the vest first touches water is connected to the cell phone network and provides an exact positioning of the passenger. When there is no cell phone coverage, which is often the case at sea, adjacent boats and rescue helicopters automatically forward the signal to satellites, maintaining the GPS signal during the entire rescue operation. 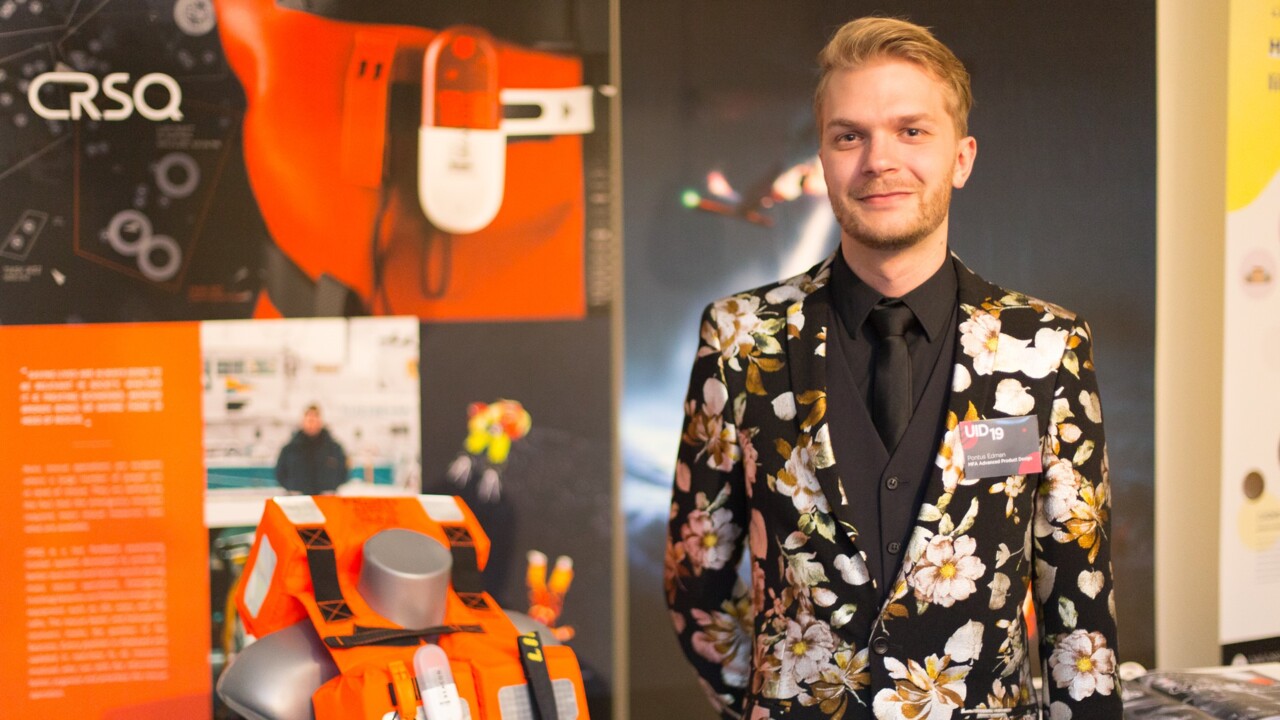 - Helicopters, boats and control centres will receive coordinates from all life jackets on their screens, giving rescue personnel completely new opportunities to work methodically and structured even when it is night or when visibility is poor. The fact that the transmitters are also equipped with lights makes it easier for rescue divers and others to locate them visually, says Pontus Edman.

He too describes the time at Umeå Institute of Design as very important.

- UID really has a secret recipe. In addition to talented teachers, many ambitious and purposeful students come here from all over the world. We spur each other on and drive each other to perform, which is incredibly inspiring, he says.

- Umeå is a great place too. While you can find everything you need here, it also gives you the opportunity to really focus on your studies. There is a calm here that I find very valuable, says Pontus Edman.

At UID19, 42 students across the various programmes presented their grad projects. The event also represents an opportunity to invite a number of guests - talented and well-known designers as well as alumni from across the globe - who share experiences from their working life with students.

One of this year's guests is Alberto Villarreal, who first arrived at Umeå Institute of Design as a student some 20 years ago. After his education he moved to San Francisco as a fresh designer where he worked at a consulting firm for a few years. Since then, he has worked in a company that he himself founded in his native Mexico. Today, he is employed as a Creative Lead designer at the Consumer Hardware group at Google where he develops a range of hardware products such as computers, mobile phones, and other devices in the Pixel series range, linked to the Android software. 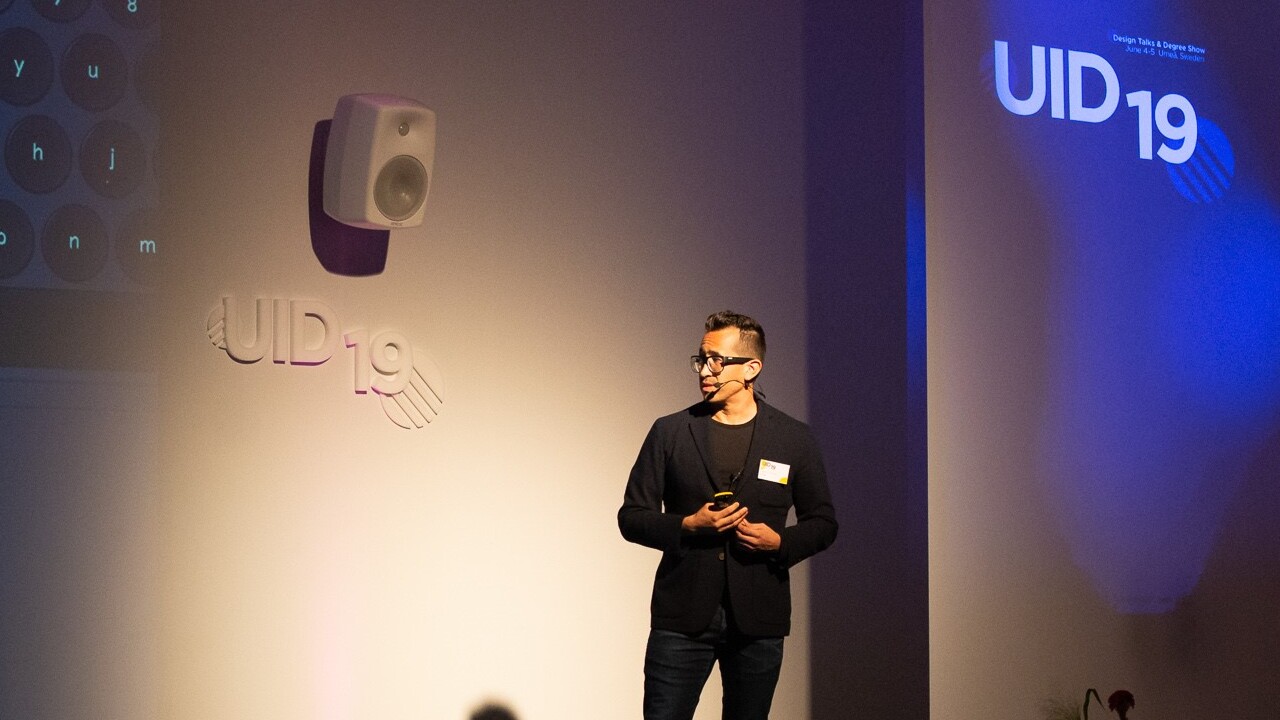 - These types of products are very complex. Each centimetre is packed with technology, which in itself sets limits for the designer. In order for the equipment to work for the user, in his or her pocket, in their hands, in life, it also requires recognition and familiarity between the different products as well as generations of products. Of course, they should also be modern in terms of colour choices and shapes, says Alberto Villarreal.

He describes the challenge of coming in as a designer for hardware products at a company specialised in software.

- It´s hard to work with hardware, he says and smiles.

- Development of hardware entails a completely different process than software development. Software is what Google as a company is founded on and built around. At Google, hardware is something new and it requires other skills pertaining to form, choice of materials, sizes of products, and much more. The aim when we develop the company's hardware products is to tell the story of how Google should feel, says Alberto Villarreal.

During UID19, other notable names where invited as keynote speakers, including Alexandra Deschamps-Sonsino and Yasaman Sheri.

Summaries (in Swedish) of all 43 degree projects by graduates from the PhD, MFA and BFA Programmes