It required cunning, stubbornness and commitment from locals, doctors and dentists, politicians and civil servants to make the first higher education institution in the north of Sweden possible in Umeå.

What started off as provisional institutions and spin-offs from other, already established universities, became a real university itself in 1965. A university that in over a half century has become not only well-esteemed but also sought after. It is a driving force for knowledge in the region and a meeting place in the world. Up until today, more than half a million students and researchers have shaped their futures here at Umeå University.

A Swedish university in the North

Discussions regarding a university in North Sweden, Norrland, had been going on since the beginning of the 20th century. The reasoning behind the discourse was that the educational level of the inhabitants of Norrland was relatively low, and that there existed a large shortage of doctors, teachers and lawyers in the region.

The matter was brought to the fore in 1946 when Gösta Skoglund, Umeå's enthusiastic favourite son and member of the Swedish Parliament, submitted a bill for an inquiry of higher education possibilities in northern Sweden. It was unclear at the time which town would become the fifth university in Sweden, but the two main candidates from the start were Härnösand and Umeå.

The bill was rejected, and the 1947 proposal to create a national hospital with an accompanying dental school met the same fate. In spite of the setbacks, the energetic work of dedicated Umeå supporters to strengthen the town's standing as a primary candidate to host the first university in Norrland progressed with fervent momentum.

One decisive advantage for Umeå was the decision in 1951 to establish a scientific library in Umeå with a collection housing a copy of all works henceforth printed in Sweden, the fifth copy to be precise.

The library conditions that had previously worked against Umeå instead became a huge advantage when the issue was raised anew of a medical and odontology programme in Umeå. 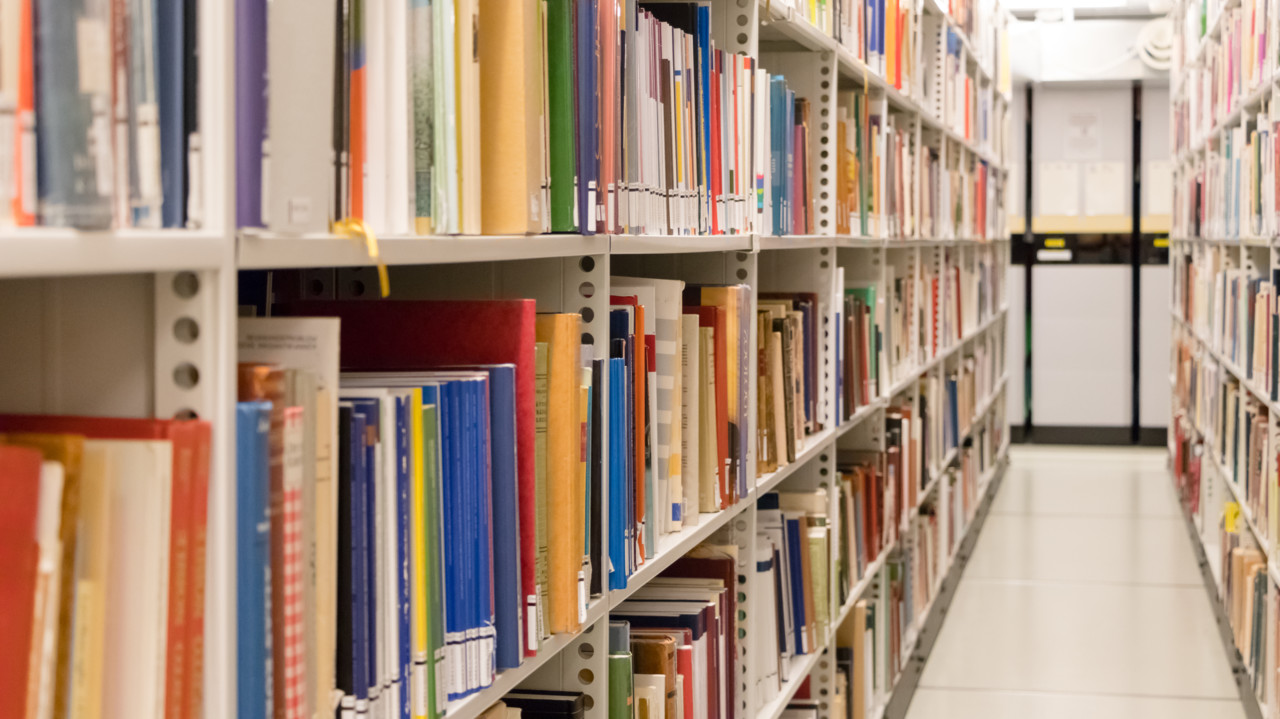 The University Library at Umeå University gets “the fifth copy” of everything printed in Sweden.

In 1956, Umeå finally received an odontology clinic with dental students and work immediately began on the creation of a students' union building and student housing construction. Thereafter, it naturally occurred that Umeå also was allotted a medical school in 1957. When the scientific library, dental school and medical school were in full operation, it was only a matter of time until Umeå University would be founded. 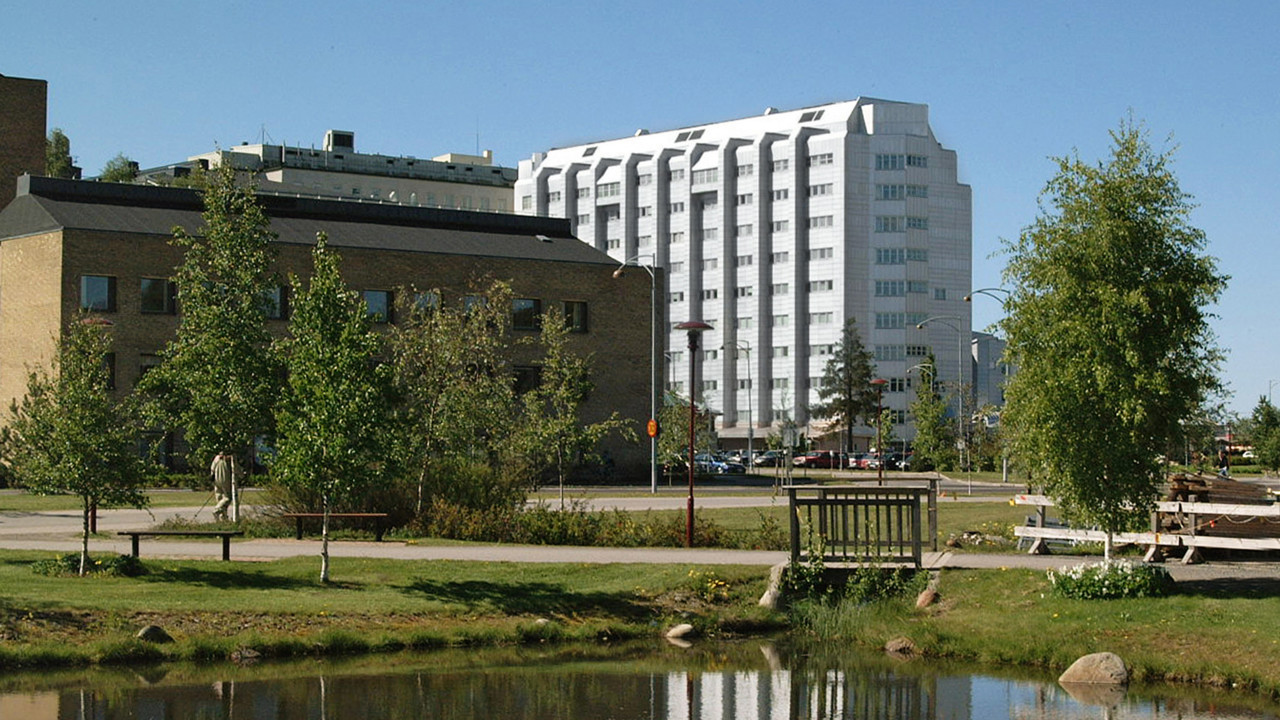 The University's research and education in odontology is now housed in a building that was completed in 1986. The Dental School.

The Parliament accepted the proposal in 1963 and the fifth university of Sweden was inaugurated on 17th September 1965 by King Gustaf VI Adolf. 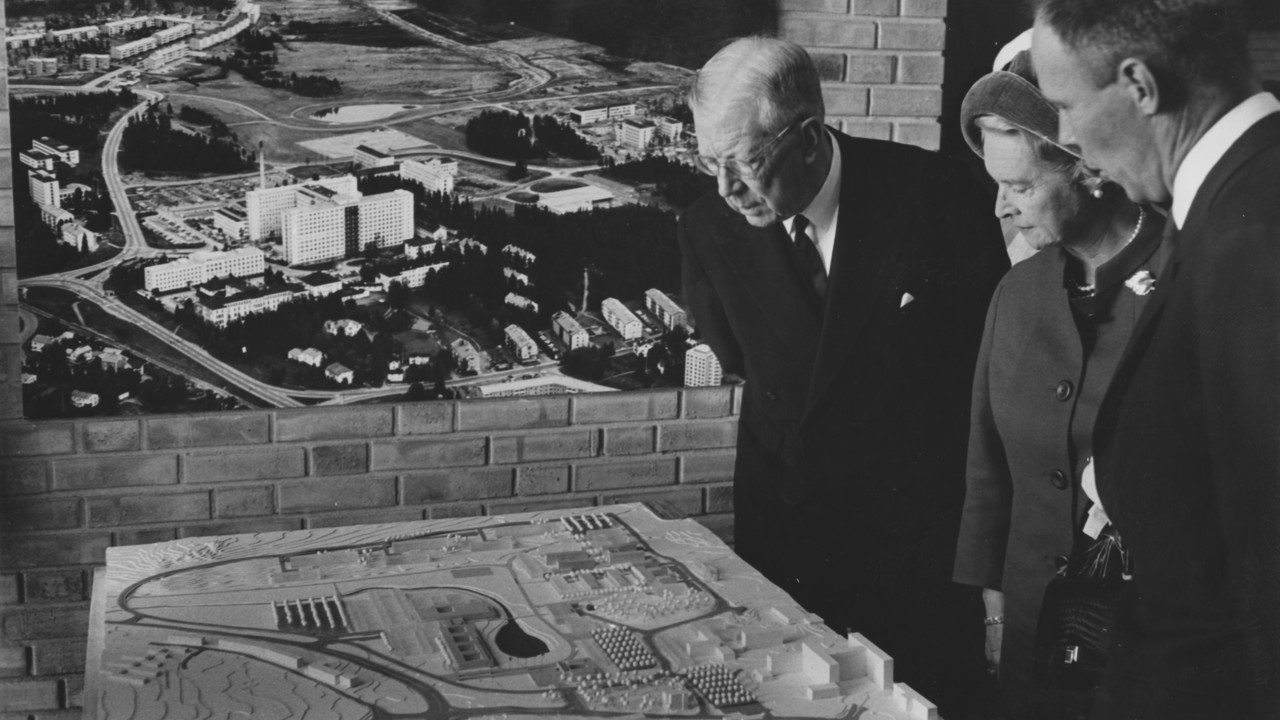 Umeå University’s first vice-chancellor, Lars-Gunnar Larsson, is showing a model of Campus Umeå to King Gustaf VI Adolf and Princess Sibylla, at the inauguration in 1965.

Between October 1998 and July 1999, Jan-Olof Kellerth held the position as acting vice-chancellor.

During the first ten years after its foundation, 2,000–3,000 students studied at Umeå University, divided between the medicine, odontology and philosophy faculties. The faculty of philosophy was split into mathematics-science, social sciences and arts faculties in 1968/69. This grouping of faculties was in effect up until 1999, when the medical and odontology faculties were combined. The Faculty of Mathematics-Science became the Faculty of Science and Technology.

New subjects and professors were rapidly installed during the university's first five years. The expansion went hand in hand with an increased enrolment of students, and by 1970, the number had risen to around 8,000. The period was distinguished by an active student life with protests and demonstrations. This political activity was the origin of the epithet "the red university" – a designation that was justified for the time, and a reputation that has persisted for many years long after it became outlived.

The University campus quickly expanded in the years after its inauguration in the mid-sixties. During the 1970s the development continued at a somewhat slower pace. The Humanities Building (1972), the Greenhouse (1973) and the Swedish University of Agricultural Sciences (1978) are the larger buildings on campus that were installed during this decade.

In connection with a struggling labour market for the academic community during the early 1970s, student enrolment decreased. The number of students was practically at a constant up until the end of the 1980s.

In the beginning of the 1980s, a balance existed between the scope of activities, number of students and access to suitable premises on campus. The huge expansion took place within research, as its budget rose by 38 per cent during the 1980s.

The 1990s: More students and buildings

In connection with an economic recession during the early 1990s, student enrolment increased dramatically. The University had partly prepared itself by having secured plans to build the Behavioural Sciences Building, the Mathematics and Information Technology (MIT) Building, and the Technology Building, which were completed in 1994.

During the remainder of the nineties, the Teacher Education Building (1996) and Chemical-Biological Centre (1999) were newly constructed. Furthermore, the rebuilding and extension of already existing structures took place, such as the Social Sciences Building and the Humanities Building. 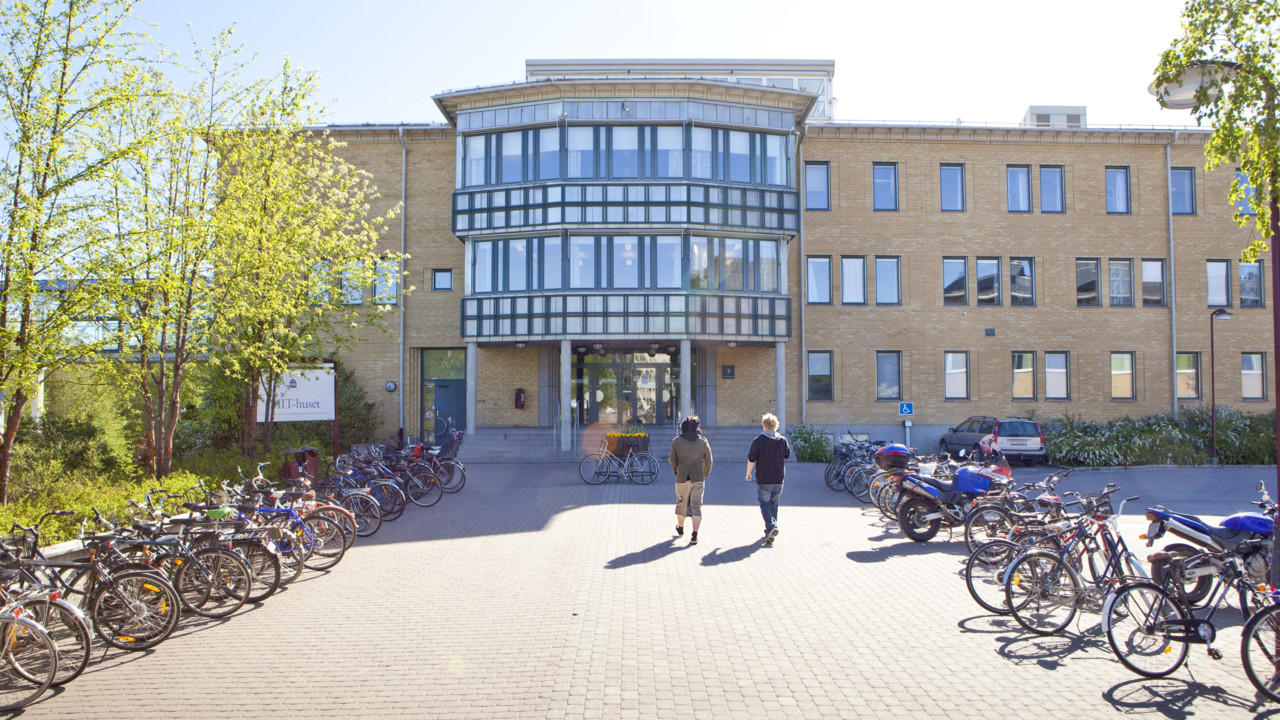 The purpose of placing the MIT Building, the Mathematics and Information Technology Building, between the University Library, Universum and the Natural Sciences Building was to create a cohesion between the southern and northern parts of Campus Umeå. 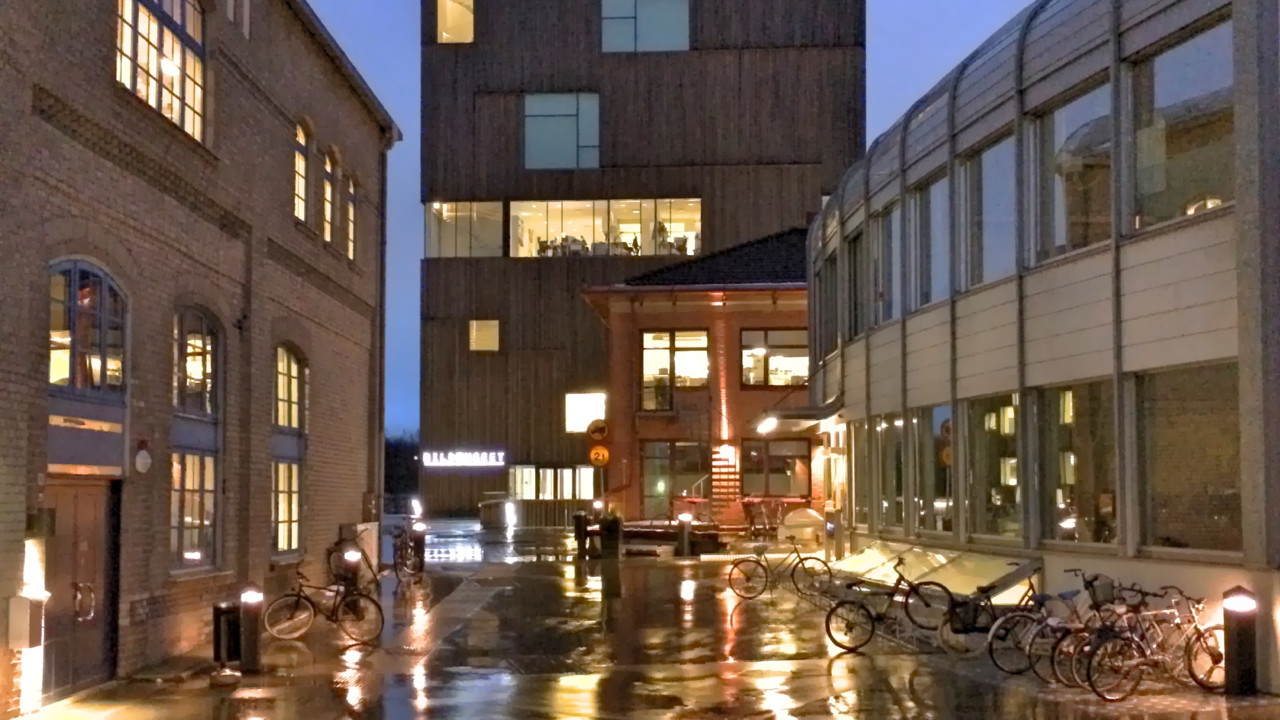 A new Umeå Arts Campus was inaugurated in spring 2012 by the scenic banks of the Ume River, closer to Umeå city centre. The new campus housed Umeå Institute of Design, Umeå Academy of Fine Arts, Umeå School of Architecture, Bildmuseet museum, and Humlab X. The creative incubator Sliperiet can also be found there. 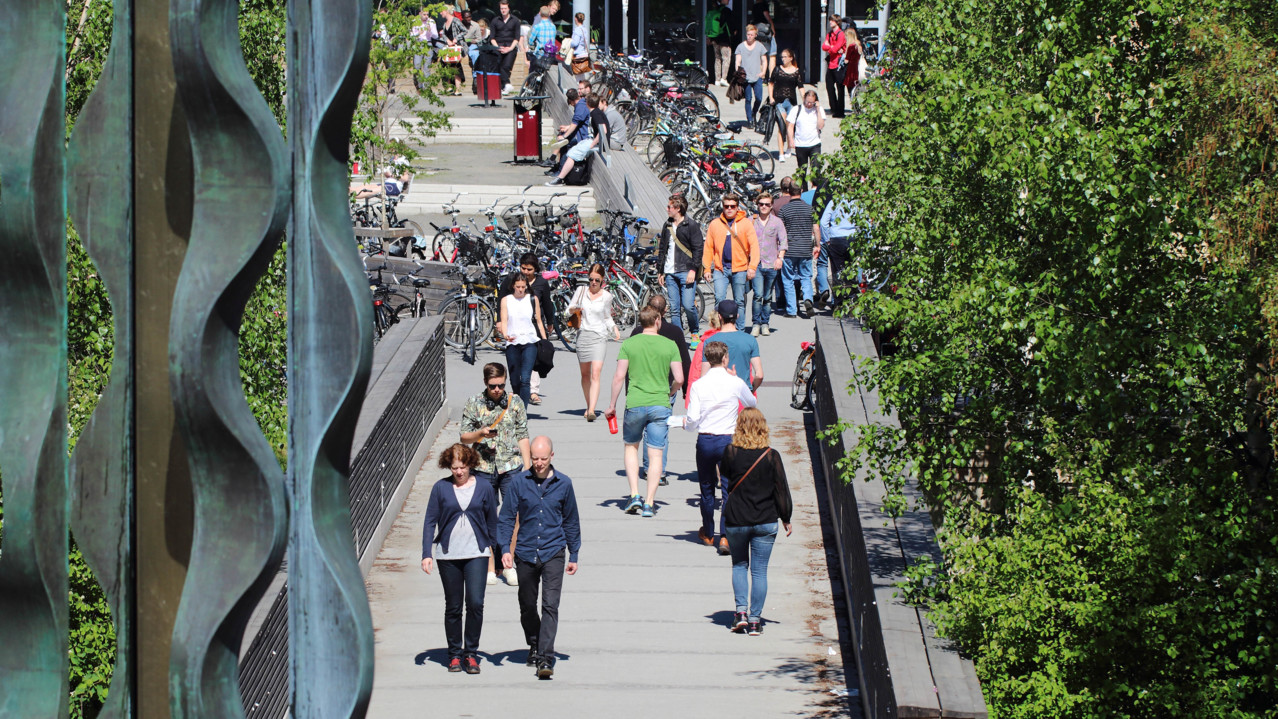 Student enrolment was huge in the beginning of the 21st century.

Some of the research at Umeå University is conducted at centres or units that gather researchers across faculties. Umeå Plant Science Centre, Umeå Centre for Molecular Medicine, Molecular Infection Medicine Sweden and the Centre for Sami Research are some examples. One of the most wide-reaching research centres is the Arctic Research Centre at Umeå University that has gathered over 320 affiliated researchers from all corners of the University since it was established in 2012.

Much of the university's research has been made possible through intensified contacts with the surrounding world. The campaign Knowledge for the Future together with Umeå University led to the collection of SEK 86.5 million from international, national and regional stakeholders between 1999 and 2001. Another campaign set off in 2009 with the ambition to raise further millions to contribute to the research at Umeå University.

The university's collaboration and outreach with the surrounding word is noticeable in several programmes. In 2001, the Umeå International School of Public Health was established at the Department of Public Health and Clinical Medicine with students from around the world.

The Health Care Administration Programme can be taken from several study venues, and a new Engineering Programme is set up in autumn 2013 (in bioresource engineering). The first architectural programme in many years started in autumn 2009. A new bachelor programme in electrical power engineering was introduced in collaboration with the electric power industry in autumn 2011. The same term, a new systems science programme started in Skellefteå together with local IT companies.

In early 21st century, the University set up an alumni network to stay in touch with former Umeå students for mutual collaborations. The first step in this initiative was the web portal Alumni. In November 2012, the first two Alumni of the Year, one woman and one man.

To enhance public outreach, the University Liaison Building (Samverkanshuset) was built in 2004. In connection to its inauguration, the Office for External Relations was set up with the task to increase collaborations between the university, society and the industry. The University Management moved into the building in 2007. Also the Communications Office and the Planning Office can be found here.

The building also offers opportunities for companies and organisations to rent premises to be in close proximity to the university operations. For instance, the Regional Ethical Review Board has its regional office here. 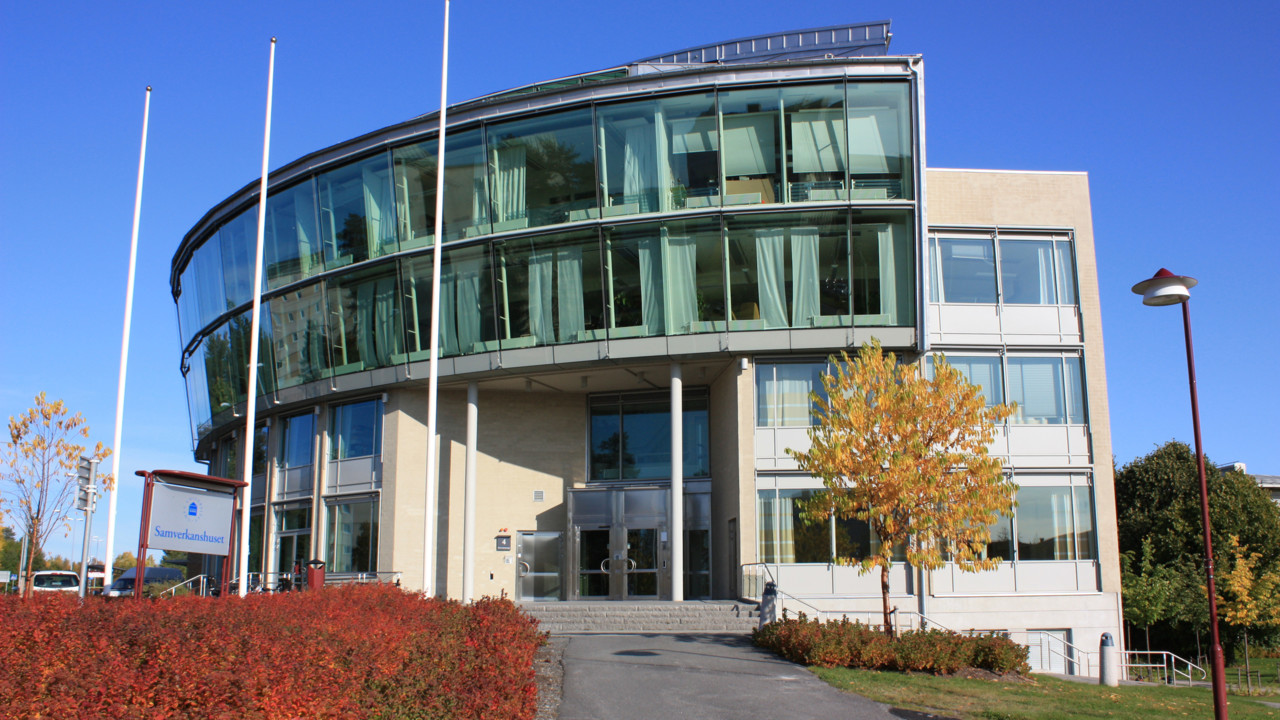 Campus Umeå was built on land that was used as a winter grazing area for the reindeers of Ran's sameby. And although the use of the land is now different, the area is still regarded as reindeer-grazing land.

The last year of winter grazing in the rich and nutritious forest that preceded campus took place in 1952, only four years before the Dental School was inaugurated.

Ran's sameby – named after the Norwegian region Ran – has roots from the 17th century. Its grazing lands stretch from the Norwegian border along the south banks of the Vindel River all the way to the coast, and hence encompasses the greater part of Umeå municipality.

Beside the campus and the area along the Mariehem stream and the Nydala forest areas, the present-day Haga and Umestan were also used for reindeer-grazing.

The expansion of Umeå has brought with it that winter reindeer-grazing in recent years has been kept outside the city borders, and mostly around Tavelsjö and on the island Holmön.

The student rising – political activism past and present

‘Welcome to the left-wing university’. An echo from revolutionary and activist times gone by.

What happened to the 'red' University? These articles cover the political momentum of 1968. All in Swedish.

A selection of brochures and publications.

We are ranked in the top 1% of universities in world university rankings.