Roger appreciated the mix of theory and practical assignments

Roger Vila went to Norway for an Erasmus exchange and enjoyed the Scandinavian study environment so much that he decided to take his master’s at Umeå University, Sweden. Following his degree in Robotics and Control he is now back in his home country Spain working as an application engineer at B&R Industrial Automation in Barcelona. 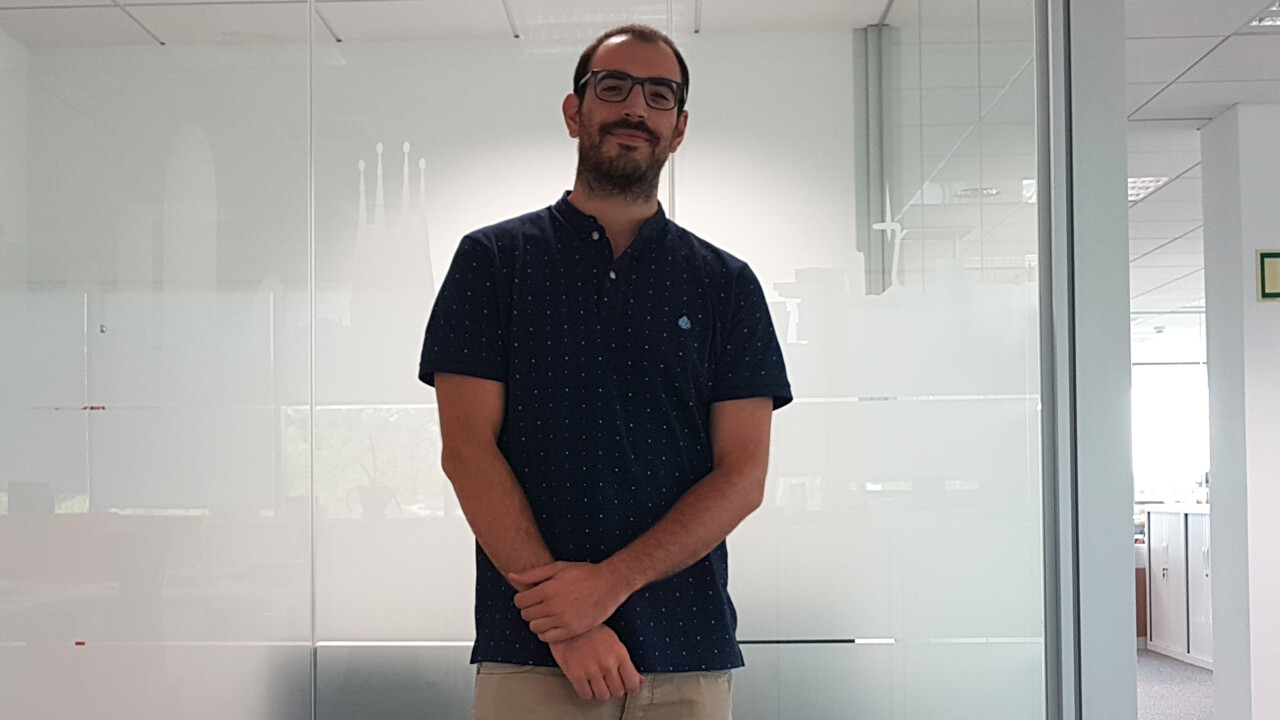 Following his degree from the Master's programme in Robotics and Control Roger Vila works at a company that provides industrial companys with all sorts of electronics they need to build their machines.

“In Spanish universities pretty much everything is theoretical, the teacher in front of the blackboard explaining something and then you go home and read and try to understand” he says. “In Norway in Sweden it’s different, there is a greater mix between the theoretical and the practical. Most courses are based on assignments where you have to think outside the box and investigate things and for me it was great practice because it’s how you later do things in your professional work.”

Shortly after returning to Spain after finishing his Master’s degree, Roger Vila got a job at B&R Industrial Automation in Barcelona, where he still works. The company has around 40 employees in Barcelona. It is an Austrian company with around 4 000 employees all over the world. Since 2017 it belongs to the ABB Group.

Makes the “brains” of the machines

B&R Industrial Automation is specialized on designing and providing control systems, HMI and motion control components. It has different type of customers which they provide with all the electronics they need in order to build their industrial machines.

“We make the “brains” of the machines and programme them. Many of our customers here in Spain are involved in the packaging industry. My job is many things, I make small applications for the machines, I give technical support to our customers and they also come to our office to learn how to use the systems we provide” says Roger.

What’s the best thing about your job?
“That it’s not repetitive! Before I started working there, one of the things I feared was that I would be doing the same thing over and over again. Even if it’s complicated stuff I get bored easily. But new things come up all the time and you need to be up to date with all the technologies we are using. One week I do some programming, another I take my car out to visit a customer that are having problems and so on, so it’s not always the same.”

Can grow within the company

Working for a big company has many advantages, Roger feels. He can grow within the company, learn new things, develop and move into new positions, for example in sales or research and development. For that reason he has so far been happy to stay employed in the same company.

How do you think your studies have prepared you for the job you have now?
“I always think that at the university you learn how to learn. The studies help you gain confidence that you are able to do what people ask you to. Even if I have no idea how to do something I know I have the resources to find things out and be able to understand complicated concepts” says Roger.

Was it easy to find employment?
“Looking at my fellow students, we ended up doing very different things, so I would say the academic background I got gives you many opportunities.”

“I’m not a fan of crowded places”

During his Bachelor’s education in electronics Roger Vila decided to go to Norway as an exchange student for half a year. Through the Erasmus programme he studied at the University of Trondheim. He liked it a lot, so much that he decided to move further north and to Sweden for his Master’s.

“For me Umeå seemed like a similar city to Trondheim and I’m not a fan of crowded places, so I think I chose wisely. I checked the university out and was convinced it would be my place. Sometimes I just get a feeling in my heart that something’s going to be right and then I follow that.”

The first six months in Umeå was challenging, he had to study hard and at the same time settle down, get to know the town and find friends. But, after that things got easier and Roger even thought of staying in Sweden after graduation.

“The university facilities are amazing, the library, the cafeterias and so on. You have plenty of space to study in a quiet environment, compared to Spanish universities that often are quite crowded. I liked running around lake Nydala, go swimming and to train at Iksu sports centre. I found my closest friends in the programme and still have contact with them.”

Finding accommodation was a bit difficult, in the end Roger shared a flat and some of his flat mates became his friends. He recommends new students to sign in with Bostaden as soon as they are admitted to a programme at the university.

Master’s programmes tend to have few students. During the first year they were eight-ten, but in the second year only three-four and in some courses only two students. That’s a pity, Roger thinks, as he had very nice teachers and found the education to offer high quality. The assignments in the different courses were varied and practical.

“We got to programme and build our own robots. In one course for example we programmed a cleaning robot, in another a robotic arm and in another we attached a camera to a robot that picked up cubes according to color and assembled them in a specific structure.”

What would you say to someone who’s thinking about studying robotics and control in Umeå. Why should they choose that?
“Because it’s fun! I’m the kind of person who likes being on the computer but also to see things moving. Robotics is between computing science and mechanical engineering. I was also surprised that so many assignments were cool and playful to do, they felt more like games than studying” says Roger.

When you chose what to study, did you choose according to your interests or were you strategic and thought of future employment?
“Interests, I’m totally against studying something because you think it will make it easier to find a job” says Roger. “I have lots of friends who did this and now they are not happy with their jobs. You spend a lot of time at work, so in the long run it’s important to work with something you like.

The years he spent in Umeå will stay with him as a time he enjoyed.

“One of the things I will remember is the summer before I finished, when I stayed in Umeå writing my thesis. It was one of the best summers I have experienced and I visited places nearby Umeå that I hadn’t had time to visit before. It was warm and the light gave you a kind of euphoria, you don’t know why but you are happy all the time.”

Read more about the Master's programme in Robotics and Control

Age: 30.
From: Cardedeu, a small town close to Barcelona.
Lives:  Ametlla del Vallè, also a small town close to Barcelona.
Family: single.
Education: bachelor’s degree in electronics, Barcelona, and master’s degree in robotics and control at Umeå University, graduated in 2016.
Work: application engineer at B&R Industrial Automation.
In my spare time: I used to play a lot of handball, but now I’m more into hiking and climbing.
Umeå in 3 words: Cosy. Winter. Second home.
Myself in 3 words: Friendly. Curious. Stubborn.
What I’ll be doing ten years from now: I don’t know, I change my mind so many times, but I imagine myself having a family of my own and working either in Spain or abroad.