At this day in age, obesity, heart attacks, strokes, diabetes and broken bones are some of the most common causes for ill health in Sweden. Researchers don't know exactly why, but the problems seem to increase at around the age of 70. And they do so at the expense of the quality of life of individuals and of society's strained resources.

People aren't stupid. We just have to figure out what actually works.

- As it stands now, the health care system is bleeding. We can't afford to look after our older population, although they require the most health care of all. We need a long-term solution, says Anna Nordström, professor in public health and specialist medical practitioner in rehabilitation medicine at Umeå University.

Anna Nordström works at the Unit of Occupational and Environmental Medicine. Along with her research team, she has spent the last six years studying how older adults in Umeå municipality lead their lives. One objective is to map risk factors for the most common diseases, and another is to work with preventive measures and provide people with tools for self-help.

- People aren't stupid. We just have to figure out what actually works. If life were as simple as 'eating correctly and exercising more', then everybody would do it. And with that, one in two adults wouldn't be overweight today.

In their mission to find answers, the team annually invites all 70-year-olds in the municipality to a health check. And the interest in participating is huge. As many as 84 per cent show up for an up to three-hour-long examination where researchers test everything under the sun: muscle strength, skeleton, balance, lung capacity, reaction and walking capabilities. The participants also fill out a form where they describe their lifestyle and eating habits. Afterwards, they take home an accelerometer that measures the participants' physical activity for a week.

- It's an anonymous little box that you place on your waistband and it doesn't show any data to the user. We don't want the participants to be affected by any results, instead they should try and carry on with life as normal,  says Anna Nordström.

When the participants come back, the researchers look at the results of the accelerometer and have a follow-up chat. The 70-year-olds are given the chance to share information about their everyday life, and they also receive the test results from the previous check-up.

- Nearly all of them express how typical it was that we measured activity that particular week as that had been an abnormally inactive week. That's a common problem with self-assessment. Unconsciously, people tend to want to exaggerate how physically active they are, particularly if they're overweight, says Anna Nordström. 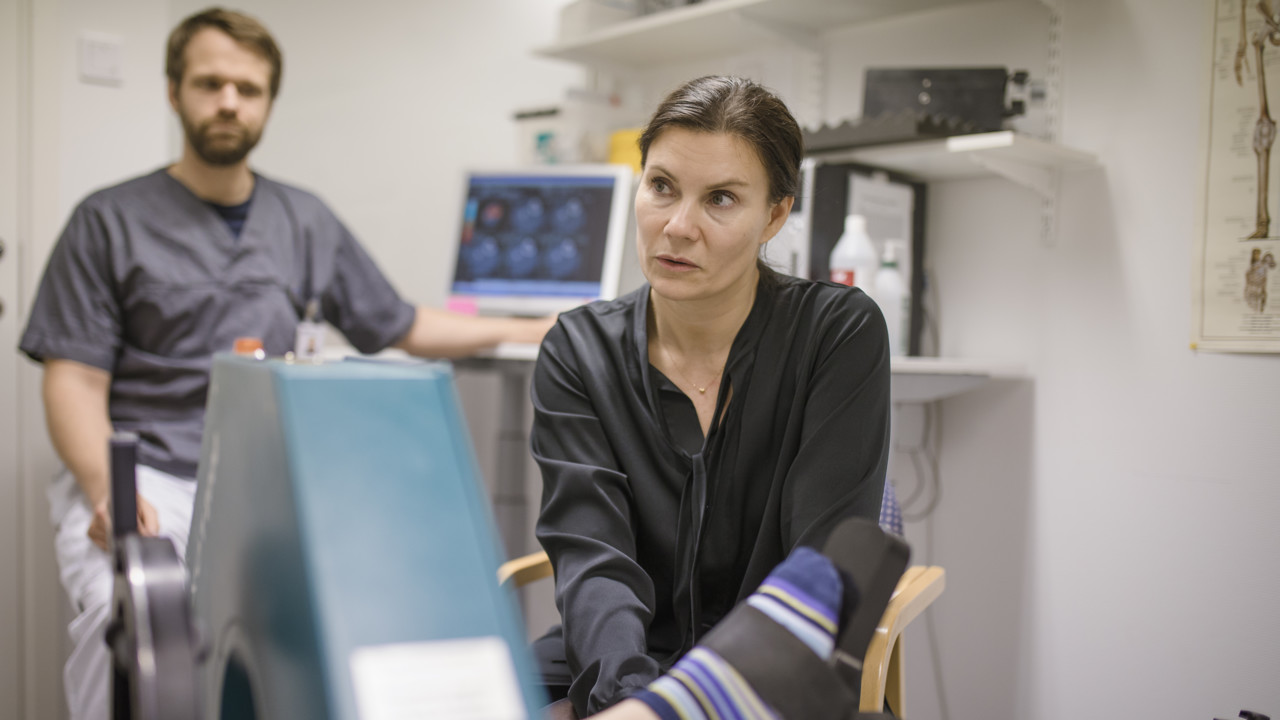 Over the years, Anna Nordström and her colleagues have performed health analyses of over 4,000 pensioners. To many, this becomes a life-changing wake-up call.

She carries on to explain that about 90 per cent of the 70-year-olds self-assess that their activity levels comply with the World Health Organization's recommendation of 150 minutes of everyday exercise per week. The true figure is 39 per cent. A majority of the older adults also sit still for more than twice as long as they estimate.

This is why we're now aiming to rewrite the advice to tangible targets that the older population more easily can relate and live up to. One example that we've discovered is that taking 6,000 steps per day reduces the risk of diabetes by half. That's a feasible target – and a pedometer function is available on most smartphones.

Working towards a healthy lifestyle

The participants also gain valuable personal insights into how they can prevent health risks specific to them. To motivate them to keep going, the researchers have collected information on healthy eating habits, current research and simple tools for self-analysis on their web page: healthyageinginitiative.com/. Furthermore, the team works closely with computer scientists and physicists to develop various technical aids.

- We're also working on an online library where we offer some exercises that older adults can perform at home. Everything is a work in progress and there's a lot that could be done together with the business sector, says Anna Nordström.

At the same time, she points out that performing something to perfection in a lab is one thing. It's a whole other matter to translate research into reality.

- Even though most people today have all forms of high tech tools, human contact is most important when it comes to lifestyle changes. Face to face meetings are key, says Anna Nordström.

Some other important collaborative partners are non-profit organisations and pensioners' associations. The public bathhouse in Holmsund outside of Umeå is one example.

We've been invited to hold inspirational lectures, and in return we receive free tickets to the events that we can pass on to those we find need inspiring the most. Everything in order to lower the threshold to physical activity.

After six months, the pensioners receive a follow-up telephone call, and this is repeated again after a year. As a result of the studies, the researchers now have six years of data to analyse. The results of all the examinations form a database through which the researchers are approaching a chance at establishing risk factors for various diseases that relate to for instance physical activity.

- It's not unreasonable to be able to postpone the need for home-help service for at least six months by setting up preventive exercises. That's probably even the biggest strength in this form of project; that we can help a lot of people and that we don't have to spend resources on trying to patch up what's already broken. Initiatives like these are what I think society needs right now.

Time has soon come to start following up the 75-year-olds in the municipality, and Anna Nordström and her colleagues are particularly curious about behaviour. For how long do the effects of the meetings last?

- Some are stubborn and express that they're aware of the drawbacks, but that they for instance like smoking too much. In those cases, we need to consider what we can give the individuals that just might work. Because pointing fingers certainly won't, says Anna Nordström.

One step can make a huge difference

Often it's sufficient to change a small detail, to take a step in the right direction, and still make a huge difference.

- Many of the participants say that meeting us has changed their lives. The kick they get out of knowing that they can actually do something themselves is a really good feeling. It's also proof that this form of reality-based research really makes a huge impact.