Pike - survivors in a changing environment?

FEATURE Coastal pike have been studied in the area around Kalmar and Öland, and major genetic differences have been detected within what was previously considered a population. The pike's ability to adapt to a diverse environment may be its key to survival.

The pike has a key role in freshwater and brackish water throughout the Northern Hemisphere. It is large and long-lived, and as a top predator it can regulate lower levels of food web. Furthermore, the pike has great value for both commercial and sport fishing.

Coastal pike live in mixed populations during the foraging season in coastal waters. When it is time to spawn, the pike split up. About half of the pike stay in the coastal area's brackish water to spawn, while half migrate to fresh water to spawn. The pike that migrate into fresh water are driven to search for the area where they were originally hatched. The pike that migrate in freshwater therefore divide into a variety of populations.

Adapted to the environment

The low salinity in the Baltic Sea means that many species live on their limit of distribution. This applies to both freshwater and marine species. Recently, specific brackish water populations have been detected for many species, and in some cases adaptation to the brackish water environment has gone so far that separate species have been developed. Already in last year's annual report for EcoChange, researchers showed the importance of salinity for the behavioral and morphological differences detected in pike. 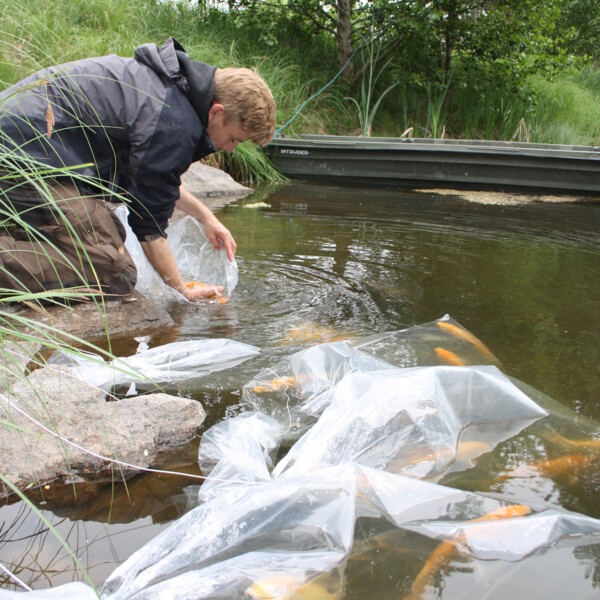 Pike spawning in fresh water is compared to pike that remain in the coastal area for spawning. The results show that there are a wide variety of genetically diverse populations of pike within a geographically small area.

These differences require barriers that prevent populations from mixing while spawning. With regard to pike, these barriers do not consist of physical obstacles. The pike can migrate in any fresh water, and they live together for much of the year. Instead, the barrier seems to be a combination of large distances between the populations, adaptations to different environmental conditions and homing behavior, meaning that pike have a strong drive to return to the area where they once hatched when it is time to spawn.

Last year's EcoChange report described the pike's adaptation to various salinity levels. The researchers have now gone further, and have also examined the pike populations' adaptation to different temperature conditions. Two areas have been studied, one on the mainland north of Kalmar and the other on Öland. At first glance, the water temperatures in the wetlands appear to be relatively similar during the year. However, there is a big difference between the two areas: In one area, the running water that connects the wetland to the sea dries out early, which means that pike that spawn in this area are forced to spawn early in the season and then have time to swim back to the sea. Therefore, these pike will spawn at significantly lower temperatures, and hatchlings and fry will be exposed to low temperatures. The question is: how are different populations adapted to the different temperature conditions they are exposed to during spawning, and what inherent ability do they have to cope with a changing environment?

Pike populations in coastal areas have decreased, and a number of measures have been put in place to restore populations of this keystone predator fish. Wetlands suitable for pike reproduction have been created, and in some cases pike breeding has also been set in the hope that it will strengthen the populations. But in order for the measures to have the desired effect, it is necessary to know what controls the structure of the fish populations in these areas. In many cases, previous decisions on measures have been made based on the assumption that the coastal pike belong to one and the same population. The detailed studies conducted provide a completely different picture, with a variety of genetically diverse populations of coastal pike.

Climate change already affects the sea and coastal areas, and we know that ecosystems will be subject to major changes. Generally, sea temperature increases, but on a local scale, for example, pike populations may be forced to spawn at lower, not higher, temperatures. This can be caused by greater variations in weather conditions and increasing frequency of dry periods. It seems that the coastal pike has an inherent ability to adapt. This allows it to survive even in a changed environment. However, it is crucial that the management of these pike populations takes this into account, so that the genetic variation that exists among the coastal pike is maintained.

The article has earlier been published in the EcoChange annual report 2019. The text is based on: