NEWS DNA in lake sediment forms a natural archive displaying when various fish species colonized lakes after the glacial period. This according to researchers at the Department of Ecology and Environmental Science at Umeå University in a study published in the journal Methods in Ecology and Evolution. 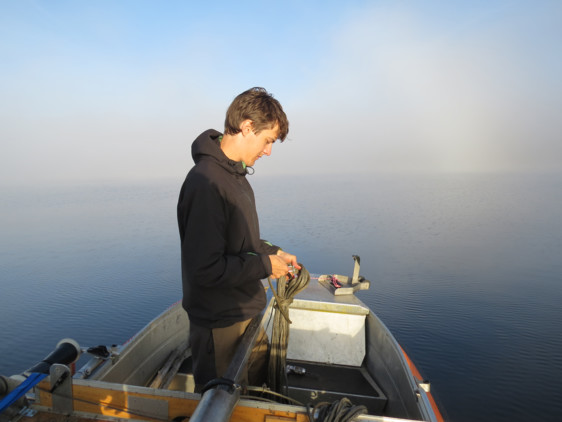 Their analyses of the prevalence of whitefish DNA in sediment reveal that the whitefish came to Lake Stora Lögdasjön in Västerbotten already 10,000 years ago, whereas Lake Hotagen in Jämtland had its whitefish only 2,200 years ago.

“It’s fantastic news that DNA can be stored for so long in lake sediment. Normally, free DNA molecules break down within days, but certain DNA fragments are preserved because they bind to clay particles,” says Professor Göran Englund, one of the researchers behind the study.

The DNA molecules in lake sediment are few and hard bound to particles. This resulted in challenging analyses and required development of new methods, both for extracting sufficiently clean DNA and for the statistical analysis of data. For this work, doctoral student Fredrik Olajos and researcher Folmer Bokma’s efforts were of particular importance.

“Being able to map the prevalence of DNA in lake sediments is now opening up a new window into history, which lets us see how nature has developed over a long period of time,” says Göran Englund. We have already started a project aiming to study how lake ecosystems are affected by historical climate changes. That can provide important clues to a better understanding of how the current global warming will affect ecosystems.”

Researchers chose Stora Lögdasjön and Hotagen for the study since they expected the whitefish to have colonized these lakes at different points in time. Stora Lögdasjön was connected to the Baltic Sea when the inland ice melted around 10,000 years ago. The connection was cut off 9,200 years ago when the land uplift created a waterfall, Storforsen, which the whitefish was unable to travel up.

“Our hypothesis was that the whitefish colonized Stora Lögdasjön immediately after the ice-melt, which turned out accurate. Close to Hotagen, on the other side, there was a waterfall that prevented the whitefish from colonizing the lake after the ice melted,” says Göran Englund.

Historic, written sources, however, show that whitefish has been found in Hotagen at least since the 18th century. Furthermore, the researchers were able to see that the speciation process that occur in many lakes – namely that whitefish populations diverge into large-bodied and small-bodied species, had not developed as far in Hotagen.

“Based on this information, we assumed that the whitefish had colonized the lake long after ice-melt, but before the 18th century. It happening already 2,200 years ago was, however, a slight surprise,” says Göran Englund.

“Naturally, we can’t know for certain how the whitefish spread to Hotagen. Fish-eating animals like the otter, bear, osprey and dipper may have been involved, but the most likely theory is that hunters and fishermen who resided in the area 2,000 years ago played a part. We can see increasing evidence that fish species were introduced to new lakes by the humans that first colonized Scandinavia,” concludes Göran Englund.

Caption (the photo at the top): Fredrik Olajos, PhD student, taking samples in the lake Hotagen.