NEWS New understanding of which role a protein plays in the gastric pathogen Helicobacter pylori’s virulence mechanism can lead to better methods to treat gastritis and peptic ulcer disease as well as in the prevention of “the silent killer”, gastric cancer. The discovery was made by researchers at Umeå University and VIB/Vrije Universiteit Brussel and is described in the journal Cell Host & Microbe. 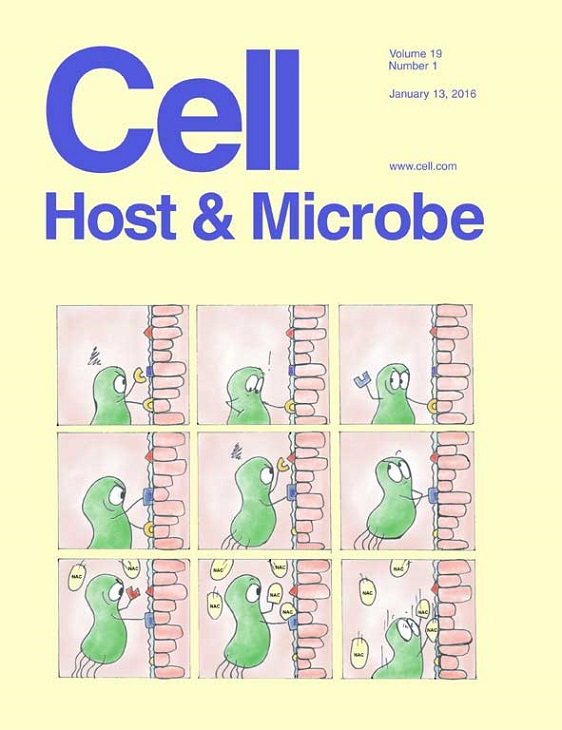 The researchers Thomas Borén at Umeå University and Han Remaut at VIB/Vrije Universiteit Brussel study how the adhesin protein helps Helicobacter pylori to protect itself from the acidity of the human stomach by adhering to the gastric mucous and to cells in the stomach lining. Through detailed analyses and three-dimensional visualisation of the so-called BabA protein in crystallised form as well as therapeutic tests in mouse models, the researchers have been able to show that treatments using the existing pharmaceutics N-acetylcysteine (NAC) can prevent the protein’s ability to bind and hence prevent adherence of H. pylori bacteria.

“We have finally obtained a better biochemical understanding of which role the protein plays in establishment of chronic infection by the stomach bacteria&languageId=1&assetKey= says Thomas Borén at the Department of Medical Biochemistry and Biophysics at Umeå University. “By using 3D images from the crystal analyses&languageId=1&assetKey=e have learnt that the protein is incredibly sensitive to so-called chemical reducing conditions, and this crucial mechanism, therefore, constitutes a form of Achilles’ heel for the stomach bacterium. This discovery will be of great importance for the ongoing work of trying to find alternatives to antibiotic treatments and vaccines against H. pylori infections; something which is especially urgent considering that H. pylori infections run a high risk of leading to stomach cancer or bleeding ulcers.”

Antibiotic-resistant bacteria is a serious public health problem, and H. pylori is no exception. Today, both gastritis and peptic ulcer disease are treated with antibiotics; treatments that often require two to three different kinds of antibiotics and still do not cure all patients. Clinical reports have shown that the pharmaceutical reducing agent N-Acetylcysteine (NA can improve the effects of antibiotics treatments against H. pylori. NAC is commonly used against various kinds of lung disease such as cystic fibrosis and chronic obstructive pulmonary disease (COP.

“New alternative treatment methods would be highly warranted. In contrast to antibiotics, a new pharmaceutical against gastric disease based on a reducing acetylcysteine component would most likely not lead to antibiotic-resistant bacteria. Pharmaceuticals that prevent the dangerous gastric pathogen from getting a footing and in the long run risk causing inflammation would lead to us having a preventive remedy to gastric cancer,” says Thomas Borén.

At present, every other human being on this planet carries the gastric pathogen H. pylori, a very adaptable organism that can rapidly change according to the new conditions in your stomach. In Sweden alone, three out of a bare ten million population carry the bacterium, and many develop symptoms of gastritis. One in five carriers will, at some point in their life, develop peptic ulcers, which needs extensive antibiotics treatment. The chronical H. pylori inflammation can at worst cause gastric cancer, “the silent killer” – a highly mortal and hard-to-treat form of cancer that affects 1.5 million people yearly worldwide.

Read a digital publication of the article in Cell Host