NEWS The winners of the European Museum of the Year Award 2014 were announced 18 May in Tallinn, Estonia. Bildmuseet, Umeå University, received a Special Commendation from the EMYA Judging Panel. 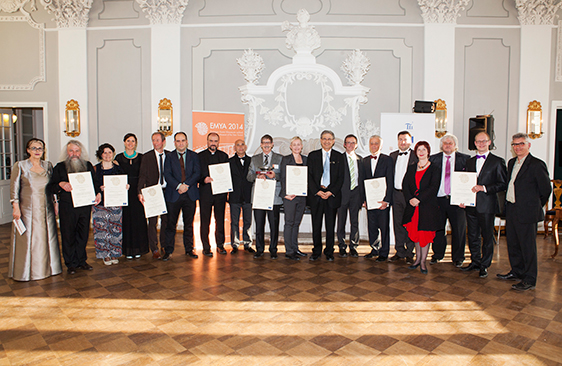 Bildmuseet received the Special Commendation "For creating a modern and innovative museum offering dynamic exhibition continuity and a permanent platform for the promotion of European and global cultural knowledge and multi-layered intercultural dialogue."

The European Museum of the Year Award (EMYA), organised by the European Museum Forum (EMF), has been presented this year for the 37th time. Every year a Main award and Special Commenations are announced. The Main Award this year goes to Museum of Innocence, Istanbul, Turkey, founded of the author and nobel prize winner Orhan Pamuk, based on his novel with the same title.

This is the first time in eight years that a Swedish museum receives an award from the EMYA Judging Panel. In 2006 Tom Tits Experiment in Södertälje, Sweden, was awarded the Micheletti Prize. This year there were two Swedish museums among the 38 nominees, besides Bildmuseet in Umeå also Spritmuseum in Stockholm.

Image above: Director Katarina Pierre, Bildmuseet, was on site in Tallinn yesterday to receive the Special Commendation (center, next to Orhan Pamuk).

Pressrelease from the European Museum Forum

For further information or an inteview with the Museum director, please contact