Climate change can cause loss of important ice dynamics in streams

NEWS In her thesis, Lovisa Lind shows that ice and winter floods are important natural disturbances for maintaining species-rich riparian zones along northern watercourses. If the climate becomes warmer this disturbance might be lost. This could potentially lead to a less diverse riparian zone. She defends her thesis at Umeå University on Friday 27 February. 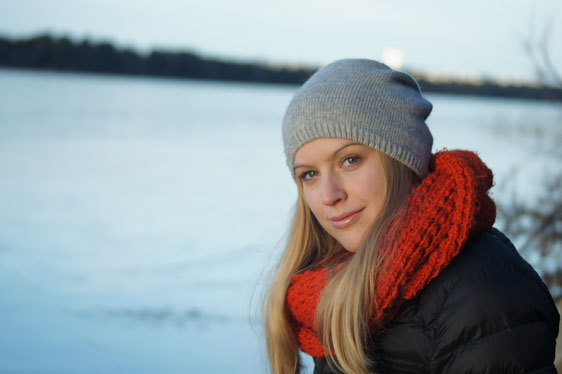 Riparian forests are important as they supply habitat, store carbon, provide shading, and filter water. We already know that ice formation and winter floods are significant factors for vegetation and wildlife in this region.

During cold winter days, frazil ice (tiny ice particles) forms in the super-cooled water of open turbulent stream reaches. Frazil ice has adhesive features and may attach to submerged boulders and other objects in the water, forming anchor ice. As a consequence, water can be dammed by the anchor ice causing flooding and ice growth in the riparian zone. When the air temperature rises the anchor ice detaches, floats away and might jam up and lead to new floods and even more ice – the stream has become an ice machine.

In her thesis, Lovisa Lind has investigated which factors control ice formation in northern watercourses, and how and to what degree ice and winter floods affect the vegetation along streams. She has inventoried ice and winter conditions along tributaries to the Vindel River in northern Sweden and related them to differences in vegetation.

Her results show that turbulent, steep streams far away from a lake outlet have a high production of frazil and anchor ice, and consequently a high number of winter floods.

“This type of streams has a more species rich riparian vegetation than streams without frazil and anchor ice production. This is because competitive species of evergreen dwarf shrubs are eliminated by ice and winter floods, and that opens up patches for less competitive species of forbs and grasses”, says Lovisa Lind.

Lovisa Lind has also studied effects of a warming climate on these relationships by, for example, creating experimental flood events.

Meteorologists predict that winter temperatures will vary more, which will lead to more shifts between freezing and thawing. If the mean temperature rises with only a few degrees, this type of ice formation can even be lost. Today, the ice formation in northern systems is already affected by, for example, dams, channelisation, agriculture and pollution.

Since northern Sweden has a large number of small watercourses, extensive areas could potentially be affected by climate change induced shifts in ice dynamics.

“If the disturbance from ice and winter floods would be lost, the riparian vegetation in northern watercourses could potentially be more dominated by dwarf shrubs. This could have further implications for the fauna and the stream productivity”, says Lovisa Lind.

The thesis is published digitally

On Friday February 27 Lovisa Lind, Department of Ecology and Environmental Science, Umeå University, defends her thesis Breaking the ice: effects of ice formation and winter floods on vegetation along streams.

The defence will take place at room Björken, the Swedish University of Agricultural Sciences, at 09:30.

Lovisa Lind was born and raised in Tärnaby, northern Sweden. She has a Master’s degree from Umeå University in Biology with a focus on nature conservation.