Do fish survive in streams in winter?

NEWS Most stream-resident fish stay throughout winter despite the ice. This has been shown by Christine Weber, previous researcher at Umeå University, by tagging trout and sculpins with transponders to follow fish migration. Fish’s general state of health is the single most important factor for surviving winter. The findings have been published in the journal Ecology and Evolution. 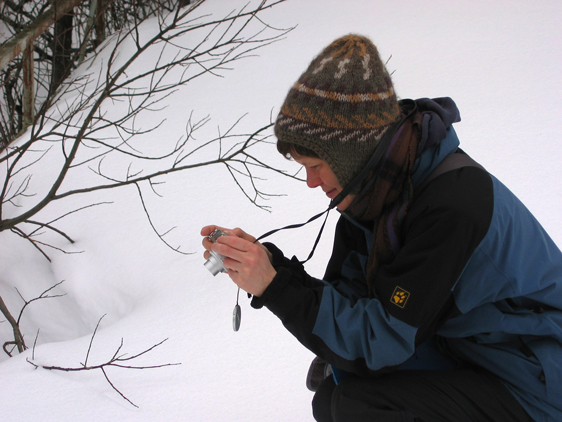 When studying how fish survive the winter, it is common to compare fish densities in autumn with those in spring. A research team at Umeå University has instead followed fish movement patterns during the winter alongside eleven approximately 50 metre-wide subreaches in the stream Smörbäcken, a tributary to the Ume River in Västerbotten County.

“The great challenge was to follow the fish despite the stream being covered by ice. We assessed that it would be possible using PIT tags, a passive transponder inserted into the body cavity through a small incision,” says Christine Weber, previous post-doc at Umeå University and one of the researchers behind the project.

The research team planted these kinds of tags in fish of all sizes, both adult and young trouts and sculpins. To understand what factors are important for fish to survive, fish length and weight were measured and their health was assessed. Out of these factors, the latter proved to be the most important one.

“It was easiest to follow the adult trouts and about 90 per cent of stationary fish were detectable at each performed tracking,” says Christine Weber.

The population of tracked sculpins and young trouts drastically decreased in mid-winter and was low until the ice broke up by which time the number increased again. The difficulty in finding sculpins under the ice might have been because they often hide in the bottom sediment when the stream water level is low. Young trouts also show similar behaviour.

To evaluate the efficacy of the method, researchers mapped the water environments by measuring the width, water depth and structure of the investigated stream, and followed the variations in ice volume during the tracking period.

“Structural factors proved less important for the survival of the fish. However, it was more difficult to receive signals from the small tags when the ice thickened. The larger tags were less sensitive to ice thickness. Also the snow depth on the ice was an issue and meant the snow had to be shovelled off a few times during the test period,” says Christine Weber.

Furthermore, more complex measuring areas led to more difficulties in tracking fish. Despite this, the method worked well in winter as long as the water under the ice was shallower than approximately 30 centimetres and the measurements could be performed often. The method could hence be a useful tool in order to better understand how various fish species and fish of various sizes can handle winter.

The project was a collaboration between researchers from Sweden, Norway and Switzerland.

Read the article in Ecology and Evolution