Eye muscles are resilient to ALS

NEWS Amyotrophic Lateral Sclerosis, commonly known as ALS, is an incurable neurodegenerative disease that affects all voluntary muscles in the body leading to paralysis and breathing difficulties. Eye muscles, in contrast to other muscles, generally retain their mobility even in the final stages of the disease. 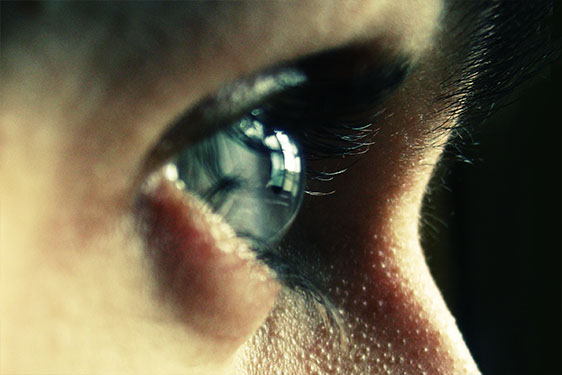 A dissertation at Umeå University in Sweden has studied the two mechanisms that could be of importance to the eye muscles’ retained function in ALS patients. The research also attempts to provide clues to novel treatment methods based upon these findings.

Eye muscles are very specialised and differ greatly from other muscles in several areas, for instance in their neuromuscular junctions formed between muscle fibres and nerve cells. Previous research has suggested that ALS causes a break-down starting in the nerve connection and spreading inwards to nerve cell bodies in the brain and spinal cord.

“We could see that the nerve connection to the eye muscles remains intact even in stages of the disease where a large proportion of neuromuscular junctions had been lost in leg muscles,” says Anton Tjust, doctoral student at the Department of Integrative Medical Biology and the Department of Clinical Sciences at Umeå University, and author of the dissertation. “The loss of connection between nerves and muscles can be seen in rather early stages of the degenerative process. We can hence establish that eye muscle protection mechanisms are active at a relatively early stage of the disease. Our results do not, however, ascertain if the disease starts in the nerve connection or in the cell body.”

A previous study, by the research team that Anton Tjust is a part of, showed that certain fibre types present in the eye muscles seem to decrease in number in ALS. In the dissertation, it is confirmed that some muscle fibre types in the eye muscles show changes in the final stages of the disease. One of these specialised fibre types, so-called multiply-innervated muscle fibres, decreased by up to a third in certain patients.

The research team measured the number of activated and maturing muscle stem cells in arm and leg muscles in deceased ALS patients, as well as in age-matched controls. The result showed that muscles in patients where the ALS had reached very advanced stages had a normal or even increased amount of muscle stem cells in various stages of activation and maturity. Nevertheless, only moderate levels of muscle stem cells were seen in the eye muscles of both healthy donors and deceased ALS patients. Based upon these findings, the researchers draw the conclusion that these stem cells do not wear out as the disease progresses in leg and arm muscles and have a very limited role in the retained eye muscle function in ALS patients.

“The fact that the eye muscles actually retain their function so well in ALS patients suggests that there nevertheless is some form of protective mechanism. Since ALS is a death sentence for patients and a tragedy to the entire family, we as researchers have an obligation to continue conducting research until we have an efficient treatment to offer,” says Anton Tjust.

Anton Tjust grew up in Gothenburg on the west coast of Sweden. He took his Degree of Master of Science in Medicine at Umeå University in 2013. Anton Tjust will now take on a medical internship at the University Hospital of Umeå where he will also continue to conduct research on ALS and the preserved function of the eye muscles. Additionally, he has previously worked at the Bergsjön health centre in Gothenburg.

Link to the publication