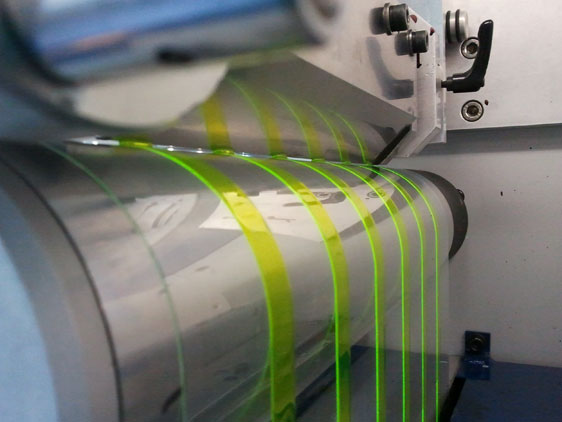 “LECs can thus be produced as inexpensive and large-area extremely thin light-emitting devices for informative displays and, at a later stage, lighting applications”, says Ludvig Edman, Professor in Physics.

Professor Edman’s group at Umeå University is focusing on novel organic compounds (such as light-emitting and conducting polymers and graphene) and develops LECs based on such materials. The researchers have dramatically improved the energy efficiency and lifetime of LECs, as well as demonstrated the unique physics and chemistry behind their operation and have recently enhanced the performance of LECs to a point where lifetime and efficiency make LECs useful for signage applications.

The next step in the development was to ensure that the manufacturing costs can be attractive for commercial applications. The report shows that using solely air-stable materials in a roll-coater apparatus, the team managed to deposit a light-emitting layer and a PEDOT-PSS anode on top of a flexible cathode-coated substrate mounted on a roll by means of a slot-die head. The layers in the produced LEC device were found to be highly uneven, and the layer thickness, for both active layer and anode, was very thick at approximately 1 µm. However, due to the unique self-doping operation of the LEC, the light emitted did not suffer from the rough interfaces, and was in fact found to be very uniform. This feature is ideal for roll-to-roll processes, as the demands of the coating quality can be relaxed thus lowering the costs substantially.

It is notable that all the steps involved, i.e. preparation of inks, the subsequent coating of the constituent layers, and the final device operation all could be executed under ambient air. This shows that the LEC-technology can be used for a low-cost fabrication of large-area light emitting devices under ambient air.

The experiments were carried out in collaboration with Professor Frederik Krebs and Henrik Dam at the Technical University of Denmark, where they have extensive experience of low-cost roll-to-roll fabrication of organic solar cells.

“It was great to work with Frederik Krebs' group so that we quickly could prove that our 10x10 cm2 application techniques for LECs were transferable to roll-to-roll-processing. Thanks to them we have made a rapid technology leap in a very short time”, says Andreas Sandström, PhD student at Umeå University.

Ludvig Edman is the founder, and Andreas Sandström the CTO, of the company LunaLEC in Umeå, where LECs are developed for commercial applications.