NEWS The spruce, giant of the forests, outlived the dinosaurs and is today Sweden’s most important plant from an economical aspect. Its genome is also huge, seven times larger than the human genome. For that reason until now a full mapping of the spruce genome has been impossible. But scientists at Umeå Plant Science Centre in Umeå and SciLifeLab in Stockholm, Sweden, succeeded with the task, and their results have been published in the journal Nature. 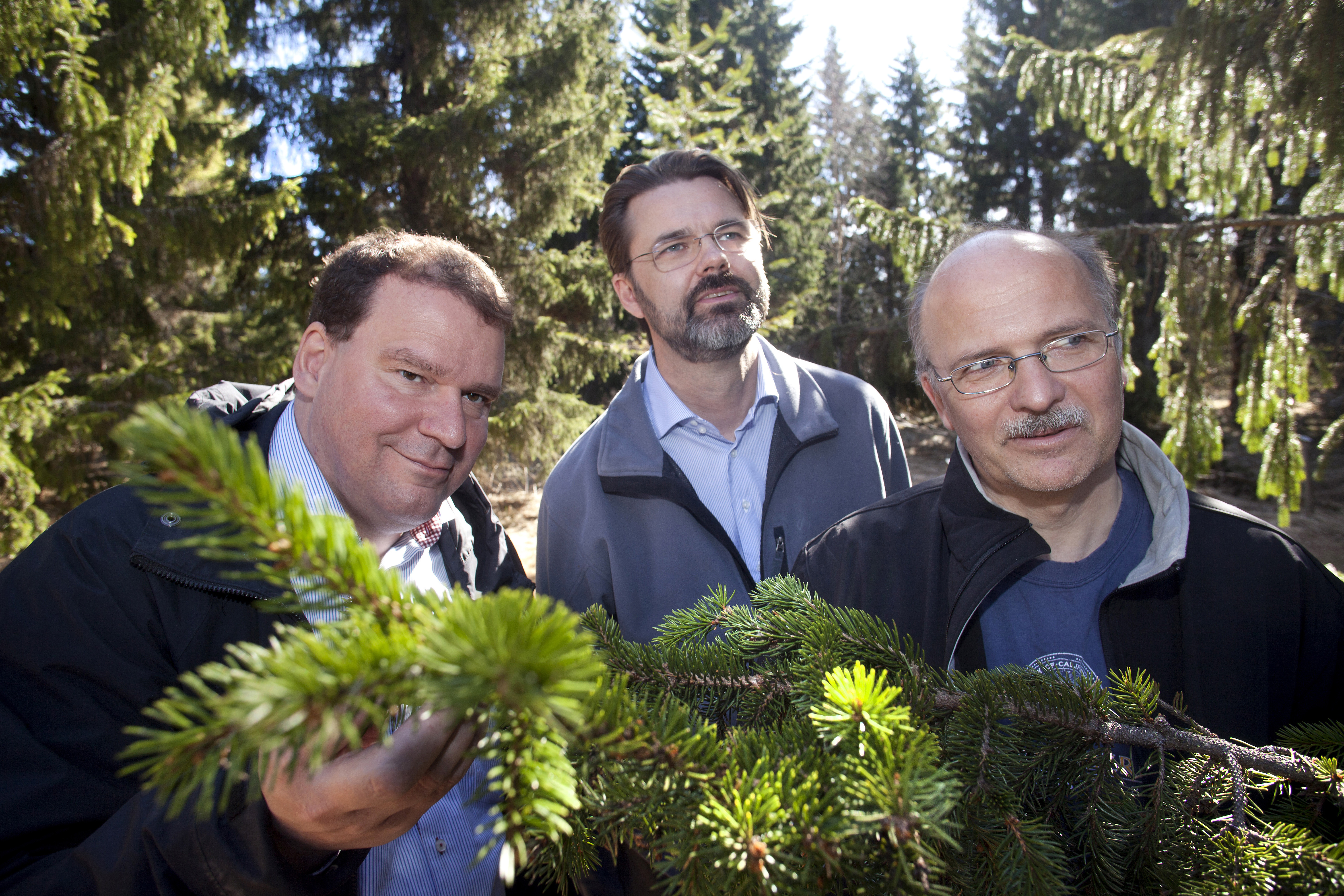 The mapping of the spruce genome was performed by professors Ove Nilsson, Pär Ingvarsson and Stefan Jansson among others.

– The mapping of the spruce genome provides us with important knowledge and makes it possible to understand why genes have gained their function, not only in conifers, says Ove Nilsson, professor of forest genetics and plant physiology, Swedish University of Agricultural Sciences. Evolution has moved very slowly in conifers, which is one of the things that are so fascinating about them! Their genome is like a “living fossil”, when you look inside it’s like looking many hundred million years back in history.

Conifers are very old; they were present on earth 225 million years ago. Other flowering plants, so called angiosperms, first appeared 100 million years ago. Even though they exploded in number and species diversity, conifers have remained and still dominate many ecosystems.

Already in the early 1900s scientists realised that conifers had a significantly larger genome than most other plants. When genetic engineering took off a hundred years later and several species; mice, humans, poplars, etc., got their full genome sequenced, conifers had to wait – and wait. It was simply technically impossible to sequence such a large genome.

In 2009 scientists at Umeå Plant Science Centre at Umeå University and Swedish University of Agricultural Sciences felt the time had come to try what nobody else had dared. A genome project is costly, so they applied for funds from the Wallenberg Foundation.
– But neither of us were certain if the mapping was feasible. We actually wrote in our application that we were doubtful, says Ove Nilsson.

The solution came with the establishment of SciLife Lab, a unique Swedish investment in life sciences through collaboration between KTH Royal Institute of Technology, Stockholm University, Karolinska Institutet and Uppsala University. With new cutting-edge technology and with heavy investments in new platforms for genomics and bioinformatics SciLifeLab offered possibilities to tackle the project of a whole different magnitude. 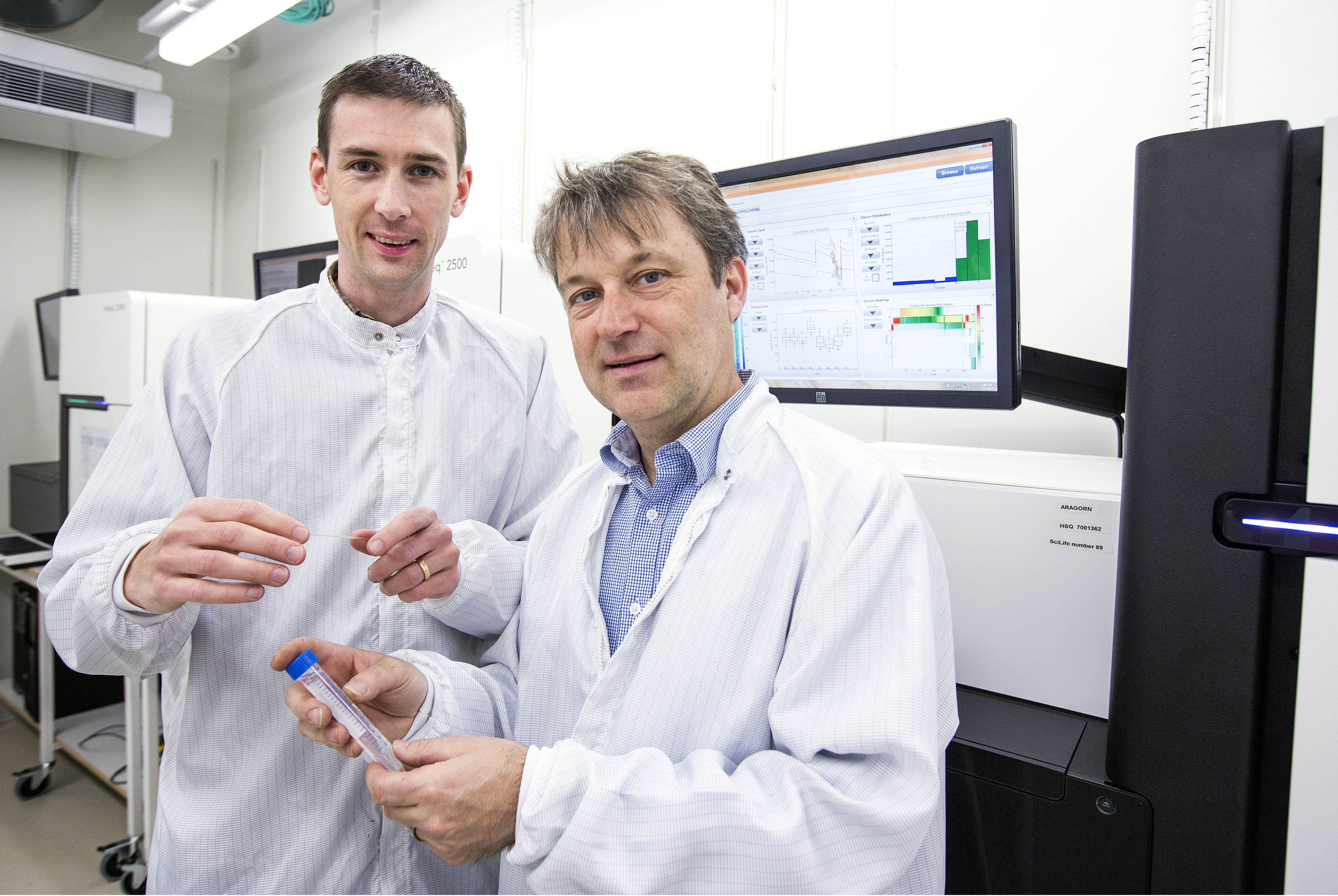 Björn Nystedt and Joakim Lundeberg at SciLifeLab in Stockholm.

The work started in June 2010 and soon gained momentum. In a week the ultramodern machine in Stockholm churned out more genome sequences than the human genome project managed in ten years.
– Timing was optimal, the specimens with spruce DNA arrived just as we had moved into new premises and were unpacking our new hypermodern instruments for DNA sequencing, says Joakim Lundeberg, professor of genetechnology at SciLifeLab in Stockholm.

“Capacity on the topmost level” 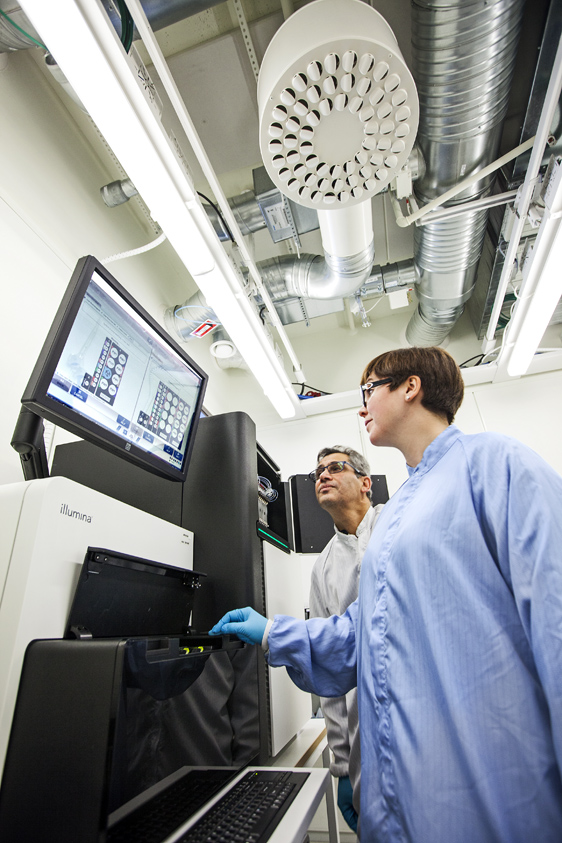 SciLifeLab has the latest technology for sequencing large amounts of DNA.

– It was a huge undertaking where we apart from pressing the latest technology have had to develop completely new laboratory methods, says Joakim Lundeberg. In addition to that there were no computers or programmes available to handle the amount of DNA sequence. We have had to develop that, when we started no computers in Scandinavia had enough capacity. He also highlights the scientific environment at SciLifeLab as part of the success.
– Without a critical mass of technological platforms and research groups it would have been impossible. Through this project we have proved that Sweden has capacity for genetic research on the topmost international level. The experiences from this project will be invaluable when we expand into large scale projects in medicine, health and environmental research, says Joakim Lundeberg.

The spruce DNA the scientists has sequenced originates from a stately spruce on a hill in Köttsjön, Ragunda, Sweden. The village name is a story in itself (“kött” is meat in Swedish). According to Wikipedia it has to do with an incident in the 1700s. A bear chased a herd of moose out on the lake in winter, the ice burst and all the animals drowned. Nobody is certain today if it’s truth or fiction.

Why did you choose to map the Köttsjön spruce?

– We asked the Forestry Research Institute of Sweden (Skogforsk) in Sävar if they had suitable trees for our project, says Pär Ingvarsson, professor of evolutionary genetics, Umeå University. This particular tree was the only one they still had all four copies of.
– Furthermore we wanted to use a tree we knew was important in the Swedish plant breeding program and that has been used a lot for crossbreeding, says Ove Nilsson.

Since in 1959 a few twigs were inoculated from the Köttsjön spruce, the scientists conclude that it probably has had millions of offspring in Swedish forests. It meets the criteria of a typical spruce more than well. The scientists have not only investigated DNA from this spruce, as the genetic material has also been compared with gene sequences from pine, taxus, juniper and Siberian spruce.

The results show that the spruce has around 29,000 different genes. That is more than humans have, but the spruce genome is still seven times larger than ours. That is because the genome has been diluted significantly.
– One of the things characterising the spruce genome is that it has a huge amount of pseudo genes, “false” genes consisting of fragments of already existing genes, says Ove Nilsson.

Abundant are also many gene fragments called transposons or “jumping genes”. Such gene fragments are found in all animal and plant genomes and seem to exist more or less for their own sake. The fragments are like parasites, they leap around the genome leaving lots of copies behind.

Does the tree benefit from a large genome?

– Not at all, it is rather an unfortunate consequence of the spruce lacking important mechanisms other animals and plants have to get rid of repetitive material from their genomes, says Pär Ingvarsson.

Is the spruce’s genetic ballast even detrimental for the tree?

– It should be, but apparently not when you consider how successful conifers have been through hundreds of millions of years, says Pär Ingvarsson. Possibly it has resulted in there being relatively few species of conifers, only a few hundred compared to hundreds of thousands other plants.

The spruce genome is not only large, it is also very complex and varied. Spruces actually differ more genetically than humans. Accessing the genetic code is only one part of the spruce genome project. The scientists have also developed new methods to understand which genes regulate different properties in the tree.

What practical implications has the new knowledge provided?

– When in ten years forest owners buy spruce plants, they will be of higher quality, better growing and more resistant to diseases, says Stefan Jansson.
– Breeding trees is very time consuming today. After planting it takes 20-50 years before you know if it results in a good spruce or not. With the whole genome available we hope to make shortcuts, so that you can decide at an earlier stage which trees carry favourable properties, says Pär Ingvarsson. You could also consider tailoring trees for specific uses. Perhaps one type of spruce to make pulp from, another for plank and a third for new plastic materials or fuels?

Professors Ove Nilsson, Pär Ingvarsson and Stefan Jansson standing in the spruce plantation at Skogforsk, Sävar, which provided the spruce DNA for the sequencing project.