If a tree falls in a forest, can it lift itself up?

NEWS Bernard Wessels shows in his thesis that trees that cannot perceive the ethylene signal have problems to lift themselves up. He also identified new components that are involved in the regulation of this process. He defended his PhD thesis at Umeå University on the 5th of October. 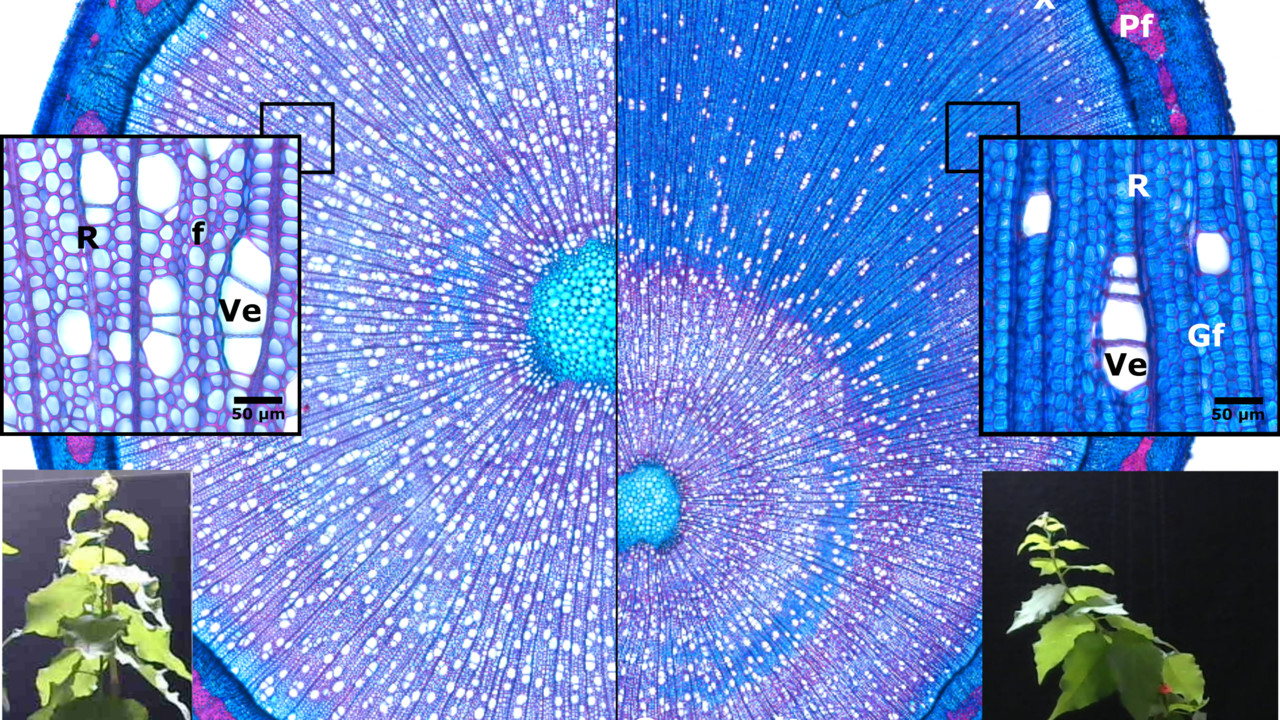 When a tree is placed horizontally, it starts to bend to lift itself back upright towards the light. A special type of wood, called tension wood, is formed in the bending region and works like a contracting muscle to lift the tree up. The plant hormone ethylene is involved in this process. It causes a change in the wood anatomy but so far it was not clear how and if these changes are really needed for the up-lifting response.

Wood is a very complex tissue that contains two major cell types, fibres and vessel elements. Fibres are providing mechanical strength to the wood while vessels are mainly responsible for transporting water and nutrients in the stem. Ethylene is known to affect the ratio between the number of vessel elements and fibres during tension wood formation.

Using transgenic aspen trees Bernard Wessels demonstrates that ethylene specifically inhibits the vessel formation resulting in smaller and less vessels and more fibres.
"We analysed genetically modified trees that were altered in their response to ethylene", says Bernard Wessels. "These trees were placed horizontally to induce the formation of tension wood. Over a period of four weeks, we took pictures in regular intervals to monitor how the trees lift themselves up. We combined all pictures into a time-lapse video and compared the lifting response of the mutants with a non-modified control. Mutants that lost the ability to sense the ethylene signal struggled to lift themselves up from the surface of the table while mutants that were more sensitive to ethylene lifted themselves up faster."

Bernard Wessels looked into the anatomy of the tension wood of the mutants and compared it with the control. He found that the number of the vessels in the ethylene insensitive mutant that had problems to lift itself up was higher than in the control while they were similar to the control in the over-sensitive mutants.

"We think that the mechanical strength of the fibres is needed to lift the tree up", explains Bernard Wessels. "Ethylene reduces the number of vessels and leads so to a change of the vessel/fibre ratio in the tension wood favouring fibres. However, our results also demonstrate that ethylene is probably not the only factor that effects the up-lifting response."

Bernard Wessels results help to understand better how wood develops and especially how the water transporting part of the wood, the vessels, are formed. This knowledge is very interesting for the forestry industry and might be needed to select for trees that can deal better with extreme variations in water availability like under drought or at flooding.

On Friday, the 5th of October, Bernard Wessels, Department of Plant Physiology, Umeå University, defends his thesis, entitled: The significance of ethylene and ethylene response factors in wood formation of hybrid aspen. The public defence takes place at 9:00 am in Lilla hörsalen ( KB.E3.01), KBC building, Umeå University.
The faculty opponent is Prof. Kurt Fagerstedt, Faculty of Biological and Environmental Sciences, University of Helsinki, Finland. Supervisor of the PhD thesis is Hannele Tuominen.