Inspiring students on their individual journeys into architecture

NEWS “Teaching for me is a joint act, where the student as a person is at the centre. I find it just as important to build students’ self-confidence and identity in the profession as giving them guidance and practical tips on how to advance in their projects,” says Amalia Katopodis, architect and lecturer at Umeå School of Architecture and one of the nominees for the pedagogical prize 2016. 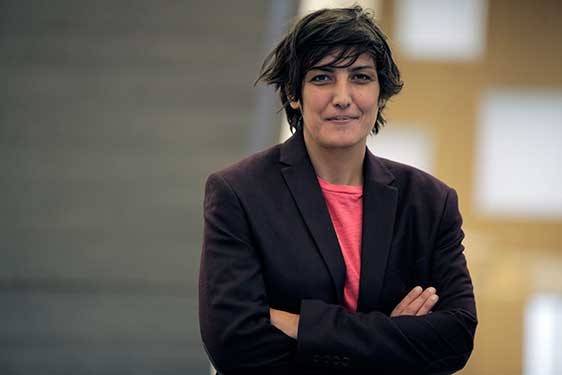 The Ume River is glistening and the rays of sun are finding their way into the lunch restaurant at Umeå Arts Campus where a chorus of voices is taking over. Amalia Katopodis is drinking her afternoon coffee out of a paper cup.

Just over a year ago, she started working at Umeå School of Architecture – a school in full-fledged remake.

“It really has been a joyride! I knew instantly that I had lots to learn and contribute with here,” she says.

As year responsible of the first year of the Architectural programme, she coordinates and develops courses. The structure of the first year has been completely revised and Amalia Katopodis has introduced a whole new way of working.Projects are carried out in consecutive briefs, in order to build up progression within the design process. Supporting studies; history, theory and technology run parallel to the synthesis course (architectural design) and new knowledge and skills are added gradually and developed in and throughout the design project.

“This way of working changes the basis of the students’ mind-sets. It helps students to reflect open-mindedly and to critically evaluate why they make their choices. It builds up criteria for these choices and decisions. Architecture isn’t only supposed to be beautiful, it’s equally much about science, materiality, structure, social context and culture, among many other things. Our educational structure provides stability and is rather unique.”

The subject of architecture varies from regular subjects.It does not work like mathematics or language studies; instead it is a completely new subject that most students previously have not taken at upper secondary school. In the first year, different communication tools are introduced and students are encouraged to explore these: sketching, drawing, photography, filming, model making and 1:1 constructions using the workshop.

“Discovering your personal techniques, developing your critical thinking and investigating your interests are important elements in the students’ journey towards the architectural profession,” says Amalia Katopodis, who sees herself both as a teacher and a coach.

Do students get what they expected when they applied?

“They do. At first, however, they are frustrated and many feel awkward and clumsy. Although later in the year, we can see that the students begin to develop their identity and start believing in themselves and their work. It’s a rather beautiful process.”

A part of the educational method is that students do not know what the following brief will be, in order to focus on the present one and not rush to conclusions or pre-judged ideas. Students can also, often be given unexpected projects.

“The first project in the autumn term was to measure the body at a scale of 1:1, in order to comprehend the notion of space through their bodily experience. They here first asked to measure themselves in quantity and then in quality – cultivating a balance between science and art, technology and design.”

This set of measurements builds up progression within the design process and the architectural project as a whole is concluded by ‘The Un-fashion show’. Students have to design and build an intermediate space between themselves and the world; a piece of wearable architecture or device, and present their work in a performance where the whole Architecture School is invited. It’s a first step for students to expose themselves to scrutiny and evaluation, stepping outside their comfort zone.

“Exhibiting their work is often the hardest part for the students. Although, as an active architect, you and your work are constantly under scrutiny; you often have to compete for projects – and in doing so, you need to be able to present, accept criticism and believe in your idea.”

The new way of working has yielded very good results on the student work, which reached a very high level this spring, portrayed at the End of Year Exhibition. Student evaluations show that they have developed not only within their subject area but also as human beings; they are now more aware of their driving forces, their motivation and the reasons behind choosing architecture.

Who is suitable to become an architect?

“The person should have a good balance between being artistic and scientific. Other than that, you don’t really require any particular background; instead you should have qualities such as curiosity, passion, creativity and a strong desire to create. Architects share a lot of qualities with filmmakers and composers.”

Amalia Katopodis comes from Greece and grew up in a family who moved a lot. She went to school in both the US, Italy and England.

“All the early moving from place to place has given me an increased understanding of various cultures and I’ve become adaptable and open as a person. I haven’t got an artistic background but it felt natural to study architecture.”

Amalia Katopodis studied in London and took a particular interest in the social aspects of architecture. She returned to Greece where she worked for five years at a number of large architectural firms and later started her own company together with a partner. Then the credit crunch struck and the firm had to refocus and expand into other fields of design. Thereafter she became part and involved in establishing a new architecture school in collaboration between universities in Athens and London.

“That was the step into the academy for me and a really good experience. Last year I came into contact with a Danish colleague who told me that a job was being advertised in Umeå in northern Sweden. And so it was time to travel again, get inspired and learn something new.”