NEWS Professor Emmanuelle Charpentier, director of the Max Planck Institute for Infection Biology in Berlin, And Dr. Paul Jenkins, chief statistician at Bassett Healthcare in New York, have been appointed 2017 honorary doctors at the Faculty of Medicine at Umeå University. 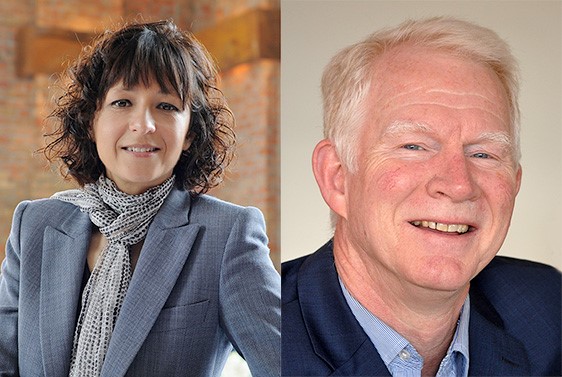 “This year’s honorary doctors have made a great impact on two strong research areas at Umeå University,” says Åke Forsberg, vice dean of research at the Faculty of Medicine.

“Both Emmanuelle Charpentier and Paul Jenkins are excellent examples of the great importance of international recruitment and international collaborations that bring Umeå University forward on the international arena. Both are well worthy of being appointed honorary doctors.”

Emmanuelle Charpentier and Paul Jenkins, both have a long-standing relationship with Umeå University, will be conferred as medicine honorary doctors at the Umeå University Annual Celebration Ceremony on 21 October.

Emmanuelle Charpentier was one of the first two internationally recruited researchers who became new group leaders when the research laboratory MIMS (The Laboratory for Molecular Infection Medicine Sweden) was established in 2008 at Umeå University with support from the Swedish Research Council. Charpentier was recruited from the University of Vienna, Austria, where she had begun studies on RNA and regulation of gene expression in the bacterium Streptococcus.

Recruitment was conducted in collaboration with EMBL (European Molecular Biology Laboratory) and became the start of the successful build-up of MIMS, which is the Swedish node in the Nordic EMBL Partnership for Molecular Medicine.

At MIMS, Emmanuelle Charpentier was given the opportunity to both expand and deepen the molecular studies of genes and molecular mechanisms that are part of the bacterial defence system against invasive viruses. As a group leader at MIMS, she published in Nature in 2011 a key paper describing the components of the CRISPR-Cas9 bacterial immune system and rules of processing of the guide RNAs within the system. This study laid the foundation for further discoveries reported in the 2012 publication in the journal Science. This paper described the last step of the CRISPR-Cas9 mechanism, DNA targeting, and provided guidelines enabling researchers around the world to apply the genome engineering technology in their cells and organisms of interest.

The publications in Nature in 2011 and in Science in 2012 involved the laboratory of Emmanuelle Charpentier at MIMS and former team members in Vienna. The Science paper in 2012 additionally involved a group from the University California Berkeley led by Jennifer Doudna whom Emmanuelle Charpentier had approached to help explore the structural details of the system. The Science paper described what is now commonly known as the gene scissors that enable targeting and precise manipulation of genes in all types of organisms, from bacteria to human cells.

The researchers under Charpentier's management successfully demonstrated how the CRISPR system from Gram-positive bacteria can target and cleave foreign DNA using a specific RNA-guided mechanism. An important part of the discovery was that the system is readily programmable, enabling its use to target selected DNA sequences in any setting, including in cells other than bacteria. Thus, Emmanuelle Charpentier, who had already developed genetic tools in the past, had this time paved the way for a new era in genetic research enabling the application of a versatile tool that not only facilitates basic molecular and cellular biological research but has been quickly applied to other purposes, including the ongoing development of novel gene therapies and the optimization of plants.

In 2013, Emmanuelle Charpentier accepted an offer to move to the Helmholtz Centre for Infection Research (HZI), Braunschweig, Germany, where she became Director of the Department of Regulation in Infection Biology, and at the same time obtained an Alexander von Humboldt Professorship at the Hannover Medical School. Her research activities continued at MIMS, and research collaboration between Umeå University and HZI in Braunschweig was deepened and stimulated through cooperation agreements.

In 2015, Emmanuelle Charpentier was appointed Director of the Max Planck Institute for Infection Biology, Berlin, Germany, and also initiated agreements aimed at facilitating cooperation in research with Umeå University. She has continued to participate actively in the Nordic cooperation in which MIMS participates in the Nordic EMBL Partnership for Molecular Medicine.

For many years now, Emmanuelle Charpentier has been very actively involved in the research at Umeå University, especially at the Faculty of Medicine, and has collaborated with the faculty's researchers and she actively contributes to the development of the molecular infection medicine field. During these years, Emmanuelle has published about thirty scientific articles in which her connection to Umeå University is clearly reflected. In addition, many appear in highly-followed scientific journals and are actively cited by other researchers around the world, providing positive effects both for our research activities at Umeå and for broader recognition of the university globally. For these continued accomplishments, the Faculty of Medicine is honouring Emmanuelle Charpentier with an honorary degree in medicine.

The collaboration with researchers at the Department of Epidemiology and Global Health was initiated in 1996 with the joint agenda to further develop health preventative efforts in Västerbotten County in northern Sweden and in Upstate New York. In the last two decades, Paul Jenkins has visited Umeå a dozen times and is presently also co-applicant for funding for two large research projects.

The research collaborations that Paul Jenkins has taken part in cover three phases. In the first, the Västerbotten project in the village Norsjö was compared to an equivalent American programme, Otsego-Schoharie Healthy Heart Program, in which Paul Jenkins was the uniting force for the American part. As collaborations developed, he also participated in other research projects in Umeå, and in education on Master’s level. During this time, he also acted as supervisor for two Bassett doctoral students at Umeå University.

The second phase of the collaboration concerned obesity and mortality. In this project, huge focus was also placed on weight stability as an alternative to handling overweight and obesity with weight-reducing measures, and Paul Jenkins was one of the supervisors for an American doctoral student at Umeå University, who worked on comparative analyses between the US and Sweden regarding weight stability.

In the third phase, Swedish and American public health care was compared with regards to guidance and support to patients on lifestyle changes. Also here, Paul Jenkins was the uniting force for the American part of the project. Another Bassett doctoral student has recently been admitted at Umeå University to study epidemiology and implementation, and again, Paul Jenkins forms an important part of the tutor group.