Jumana Emil Abboud / The Horse, The Bird, The Tree and The Stone

NEWS On Saturday 20 May, Bildmuseet celebrates 5 years on the Umeå Arts Campus. Two new exhibitions are opened, one of them beeing Jumana Emil Abboud / The Horse, The Bird, The Tree and The Stone – from small-scale works to monumental wall paintings, sound works and video installations inspired by Palestinian folklore. 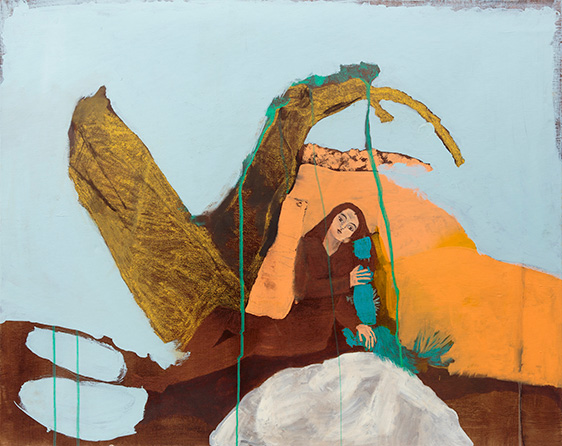 Welcome to a press preview on Thursday 18 May, at 10:00.  Jumana Emil Abboud will give a presentation. (At the same occation, a preview of the upcoming exhibition Roger Metto / Kryosfär)

Magical beings, spirits in wells and demons in trees and caves inhabit Jumana Emil Abboud's multifaceted universe. Inspired by Palestinian folklore, she imparts new interpretations to stories and myths that she has collected. Through delicate paintings, poetic cinematography and oral performances, she explores personal and collective memories.

The exhibition touches on universal and existential questions of identity, loss, longing and belonging. Emil Abboud hails from her homeland of Palestine, but her work invites us to reflect about our relationship to a specific landscape and how this shapes us and our perspectives on the world.

Jumana Emil Abboud’s artistry is driven by a wish to explore different worlds: the world we can see around us and the world of legends and fairy tales. She explores with fascination and questioning the various layers - both the personal and the collective - of these two worlds, allows them to merge into her own interpretation of Palestinian folklore, coloured by a modern political context.

The extensive exhibition presents over sixty drawings and paintings ­– from small-scale and low-key works to monumental wall paintings. In the poetical three-channel video installation Maskooneh / Bebodd (2017), Jumana Emil Abboud has sought out haunted places mentioned in the book Haunted Springs and Water Demons in Palestine (1920) by the ethnologist Tawfiq Canaan. Here you will also find three audio works where Emil Abboud interprets and recounts some of the tales: And These That Sparkle, What Are They?, The Two Lion Cubs and The Woman Whose Hands Were Cut Off (all from 2017). The inspiration was taken from the book; Speak Bird, Speak Again: Palestinian Arab Folktales (1989) by Ibrahim Muhawi and Sharif Kanaana.

One of the characters Jumana Emil Abboud has stuck to is the ghouleh-character that is present in many tales: “ghoul” (masculine) or “ghouleh” (feminine) is an Arab word for troll or monster. At all times, the world over, tales have been used to pass on our values from generation to generation. Tales instruct and frightens into appropriate behaviour. Why is the ghouleh so hungry? What is she looking for in all the bones and souls she swallows?

Jumana Emil Abboud dedicates herself to a kind of mapping of memories. She is chasing lost fairy tales in the landscape and by showing these by using pictures and speaking the words of old tales she reawakens places that have been erased from the modern maps. She animates the landscape again. Emil Abboud’s work is also a picture of the cultural landscape of Palestine where striving for continuity, despite the political context, demands constant innovation and creativity.

Jumana Emil Abboud / The Horse, the Bird, the Tree and the Stone is compiled and produced by Bildmuseet, Umeå University. In the autumn of 2017, Jumana Emil Abbod is publishing an artist book (Black Dog Publishing), which includes newly written texts by amongst others Marina Warner and Tina Sherwell. The book is produced with the support of Bildmuseet and marks the ending of the exhibition at Bildmuseet in Umeå and the inauguration of her exhibition The Pomegranate and the Sleeping Ghoul in Darat Al Funun in Amman, Jordan.

Jumana Emil Abboud is present, as well as Roger Metto whose exhibition Cryosphere will be presented at the same occation (please see the link above).

Jumana Emil Abboud and Roger Metto will give presentations of their exhibition.

The final weekend of the exhibition period, Jumana Emil Abboud will give a performance

Read more about the programme when Bildmuseet celebrates 5 years at the Umeå Arts Campus.