NEWS In her dissertation, Anna Henriksson presents a new method of establishing how freshwater fish can defend themselves against an invasion of a new fish species. The method takes into account that resident species in a lake contribute at a varying degree to the resistance of the new species. The dissertation defence takes place on 12 November at Umeå University. 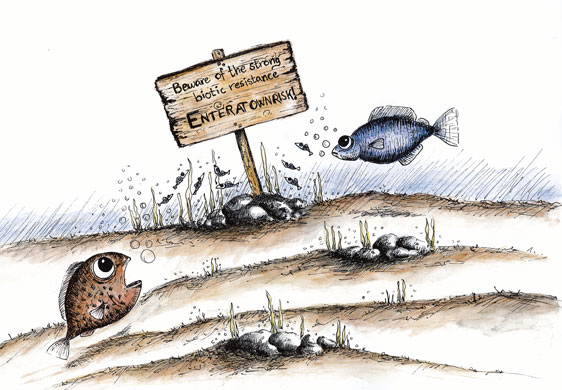 In her dissertation, Anna Henriksson uses a large dataset from more than 1,000 failed and successful introductions of freshwater fish in Swedish lakes to test hypotheses surrounding biotic resistance. A general hypothesis in biotic resistance is the one of species richness. It predicts that species rich communities are more resistant to invaders than species poor communities as more species can use up a larger proportion of the resources. The hypothesis has not been supported in empirical studies and one important reason is that it assumes that all species contribute to an equal level of resistance and that all have a negative impact on the new species’ ability to establish.

Anna Henriksson presents a new method in estimating species richness which better reflects the ecological community’s resistance. The method, which she calls weighted species richness, takes into consideration that resident species contribute in different strength to resistance, but also that residing species do not necessarily have a negative impact on the establishment of the new species, but can also have a positive impact.

Furthermore, Anna Henriksson has explored how the resistance in a lake has developed over time through analysis of fish species’ achievement in its part as both invading and residing species.

She was able to see how species’ ability to establish and their resistance correlated positively. Resistance will be built up over time through the species that most easily establish, such as pike and perch, also contribute the most to resistance to other species.

Arctic char and brown trout are two of the weakest species with low ability to establish and low resistance. Anna Henriksson found that such species are also most sensitive to extinction when new species establish. This is of great importance to nature conservation, she continues.

“This means that Scandinavian mountain lakes that to a great extent are composed of weak species such as Arctic char and brown trout are sensitive to introductions of species such as pike and perch. If the char and trout populations are lost, they are also more difficult to reintroduce,” says Anna Henriksson.

Anna Henriksson grew up in Holmsund outside of Umeå. At upper secondary school she studied the programme Image and design at Midgårdskolan in Umeå. After school she added the natural sciences at Komvux, a municipal adult education, which led to her studying ecology at the University of Skövde where she completed her Bachelor’s. She later returned to Umeå where she completed her Degree of Master of Science of Ecology at Umeå University in 2011 whereafter she began her PhD studies.

The dissertation takes place at 10:00 in hall N320 in the Natural Sciences Building at Umeå University.