NEWS In the northern parts of the Baltic Sea both precipitation and river discharge are expected to increase as a result of climate changes. The increased river discharge will lead to a higher inflow of river-borne dissolved organic matter to the coastal zone, which in turn will promote bacterial production. 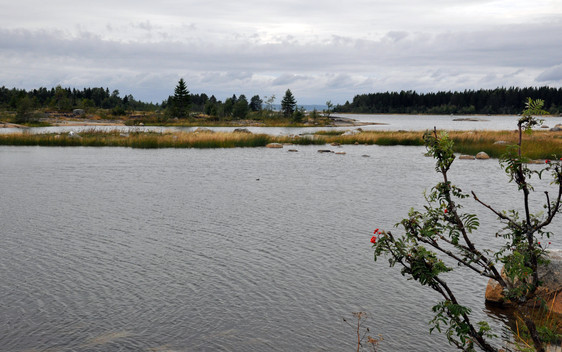 Simultaneously, the phytoplankton production will decrease as a result of both competition with bacteria for nutrients and the deteriorating light conditions. A glance into the future shows us a shift towards more bacterial-based marine food webs, and thereby a decrease in fish production.

Bacteria are so small that you just barely can see them even if you use a microscope. Even so there might be millions of bacteria in a single milliliter of water. Their role in the marine ecosystem is mainly to decompose and recycle organic matter.

There is a lot of organic matter in sea water, especially in estuaries and inland waters. During the spring flood you can even see the darker colouring of the river water as it discharges into the sea, due to the terrestrial organic matter it carries. The organic matter absorbs light giving the water a brownish. In early spring the amount of dissolved carbon from the rivers increases in coastal areas, and the bacteria thrive. They either transform the organic matter into biomass, which can then transfer through the food web to higher trophic levels, or else they use the carbon for their own metabolism and respiration.

To study the aspects of food web efficiency and climate change, a series of measurements were performed in the northernmost part of the Gulf of Bothnia by a group of Ecochange researchers. The studied area is placed in an estuary receiving river discharge from an unregulated river, the Råne river. The large majority of the dissolved carbon in the sea water is of terrestrial origin, and the bacterial production is threefold higher than the phytoplankton production. In other words, the food web in the studied area is heavily reliant on bacterial production.

The efficiency of a food web indicates how much energy is required for the carbon to transfer from the lowest trophic levels to higher levels in the food web, such as fish. A food web based on bacteria will contain additional steps compared to a phytoplankton based food web as these tiny microbes are only edible for smaller members of the food web. Thus numerous additional intermediate organisms shape the food web. Since energy is lost at each step the bacterial-based food web will therefore be less efficient. The relationship between bacterial production and phytoplankton production will have a great impact on the food web efficiency. If the proportions change, so that the bacteria production increases in importance, the productivity at higher trophic levels is expected to decrease, as well as the total productivity of the coastal ecosystem. In simple terms: more bacteria - less fish.

Read more about the investigation in Råne river estuary