NEWS Organic catalysts are a breakthrough in the quest for inexpensive and efficient materials for environmentally friendly production of energy in fuel cells. A new study by physicists at Umeå University in Sweden, published in ACS Nano, provides better knowledge about key processes in producing these catalysts. 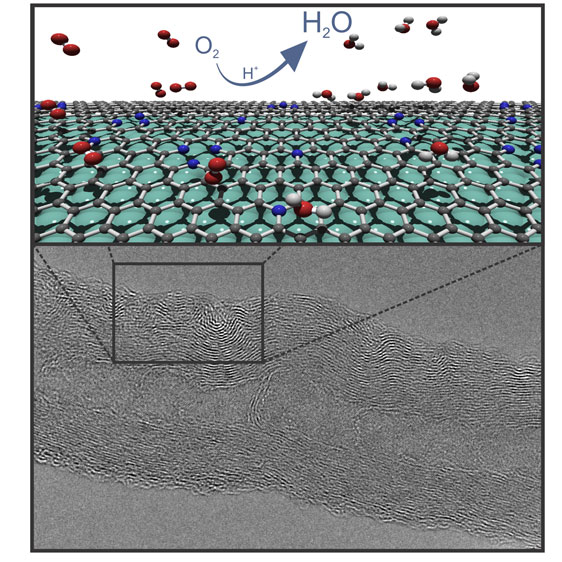 The world’s needs for energy and raw materials are constantly growing, and the search for readily accessible and inexpensive material for energy applications is driving research teams all around the world. Fuel cells based on hydrogen and oxygen, for example, can convert stored chemical energy into electrical energy in an environmentally friendly way, as the byproduct is simply water. For this conversion to occur efficiently, the electrodes in the fuel cells contain various forms of catalysts.

A major problem with these catalysts is that they are currently being made of alloys of platinum, ruthenium, and other noble metals. These noble metals are not only extremely expensive but also rare and difficult to extract. The pressure to find other more readily available catalysts is therefore very strong, and hence a report in Science about three years ago that an all-organic catalyst based on nitrogen-doped carbon nanotubes could catalyze the splitting of oxygen just as effectively as platinum, evidently drew a great deal of attention.

Since then research in this field has been intensive, but yet many questions remain regarding the mechanism and efficiency of catalytic processes that occur at the defects where nitrogen atoms have replaced carbon atoms in the carbon nanotubes. A normal “ideal” carbon nanotube consists entirely of carbon atoms, but in practice most materials have defects. For example, it may be that an atom is missing at a site where it normally should be found, or that a carbon atom has been replaced by a foreign atom.

“In our case we deliberately created defects in the carbon nanotubes by replacing some of the carbon atoms with nitrogen atoms. We did this to create local centers around these defects that have an increased electron density. The increase in electron density leads to the desired catalytic properties,” says Thomas Wågberg, associate professor at the Department of Physics.

The study shows that the catalytic effect is much larger around certain types of nitrogen defects than around other types.

Similar materials that the research group is studying also show great potential to catalyze other processes, such as the reverse process of splitting water into oxygen and hydrogen, which is referred to as artificial photosynthesis.

Behind the study is a research team at the Department of Physics, directed by Associate Professor Thomas Wågberg and including Tiva Sharifi, Dr. Guangzhi Hu, and Dr. Xueen Jia, with funding from, among others, the Knut and Alice Wallenberg Foundation, the Swedish Research Council, ÅForsk (Ångpanneföreningen’s Foundation for Research and Development), and the Kempe Foundation.