NEWS Solar cells based on semiconducting composite plastics and carbon nanotubes is one of the most promising novel technology for producing inexpensive printed solar cells. Physicists at Umeå University have discovered that one can reduce the number of carbon nanotubes in the device by more than 100 times while maintaining exceptional ability to transport charges. This is achieved thanks to clever nano-engineering of the active layer inside the device. Their results are published as front page news in the journal Nanoscale. 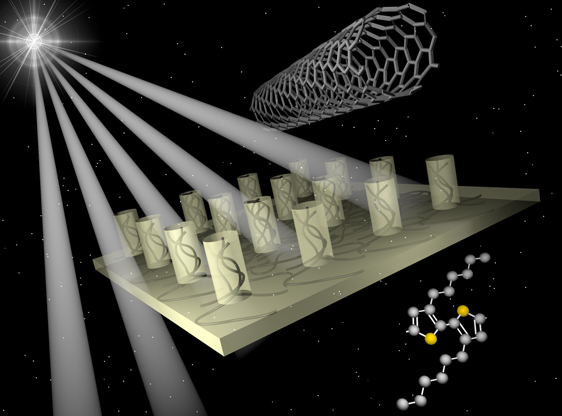 Carbon nanotubes are more and more attractive for use in solar cells as a replacement for silicon. They can be mixed in a semiconducting polymer, and deposited from solution by simple and inexpensive methods to form thin and flexible solar cells. The hybrid material is easy to spread out over a large surface and the nanotubes have outstanding electrical conductivity, and they can effectively separate and transport electrical charges generated from solar energy.

Earlier this year, Dr. David Barbero and his research team at Umeå University, demonstrated for the first time that if carbon nanotubes are connected to each other in a controlled manner to form complex nanosized networks, one can achieve significantly higher charge transport and electricity than had previously been possible using the same materials. This means that the transport of electric charges occurs with a very little energy loss.

Previous studies have reported that there is a percolation threshold for the amount of carbon nanotubes necessary to transport efficiently electric charges in a device. Below this threshold, the device become completely inefficient and no current can be generated.

In this new study, Dr. Barbero and his team at Umeå University show that this threshold can be reduced by more than 100 times in a semiconducting polymer and still generate high currents and charge transport at very low nanotube loadings, thereby strongly reducing materials costs.

“Our results are important from a fundamental point of view, but also of practical importance. The purified semiconducting nanotubes, which are necessary for high-performance devices, are still quite expensive and time consuming to produce. Now, nano-carbon devices, such as carbon nanotube based solar cells, can be produced with a much smaller number of carbon nanotubes and therefore much reduced material costs,” says David Barbero.

The new results are expected to accelerate the development of next generation of solution processed thin film nano-carbon based solar cells, which are both more effective in generating power and less costly to produce in comparison with today's solar cells.