NEWS Infection researchers at Umeå University have uncovered a new disease mechanism in patients with Chronic Granulomatous Disease (CGD) in an international clinical collaboration with the Children's Hospital in Zurich. Their new findings are published in the Journal of Allergy and Clinical Immunology (online publication 4 March 2011). 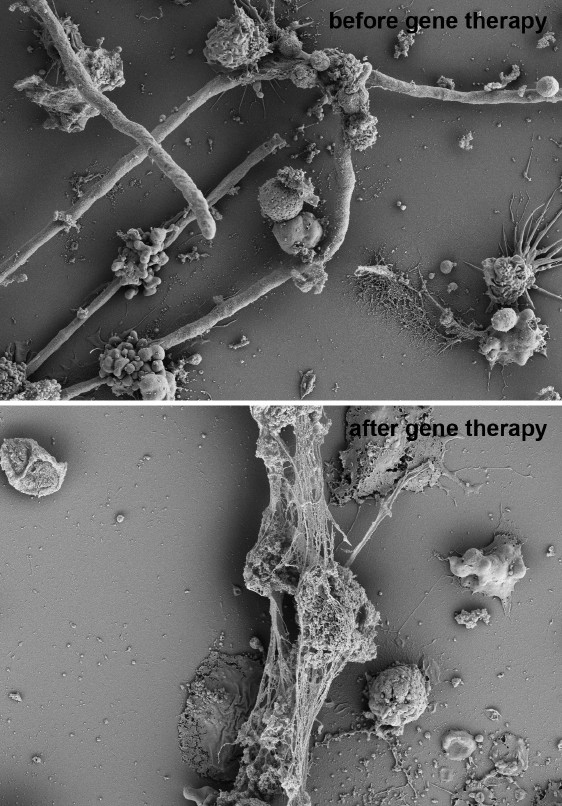 Scanning electron microscopy of neutrophils infected with Aspergillus nidulans. The neutrophils are from the same patient before and after gene therapy. Before treatment the neutrophils are unable to form extracellular traps and after therapy this ability is restored. (Picture by Matteo Bianchi).
(opens in a new window)

Fungal infections can cause life-threatening health problems for patients with immune deficiency. Their health is weakened by infections and they cannot undergo the treatment or surgery they need to survive. An example is Aspergillus infection which is life threatening for these patients. In this condition, the immune system is not able to kill the pathogen and the mould propagates from the lungs and respiratory tract into the whole body.

Chronic Granulomatous Disease (GDC) is a heritable severe immune deficiency disease that occurs at a frequency of one in 70,000 humans per year worldwide. Children with CGD often suffer life-threatening microbial infections with bacteria and fungi and die at young age without treatment. Particularly, infections with Aspergilli fungi often kill CGD patients, before bone marrow transplantations or gene therapy can be performed.

Scientists at the Swedish Laboratory for Molecular Infection Medicine (MIMS) in Umeå have now found new treatment of CGD patients.

Constantin Urban, research group leader at the MIMS laboratory in Umeå is studying mechanisms of fungi infections. In earlier studies of Candida infections, he found with his colleagues that neutrophils form extracellular structures, called neutrophil extracellular traps or NET, which catch microbes and fungi.

“NET is a very smart tool,” says Urban. “It is comparable with a spider’s web, catching and killing the trapped pathogen. We found in earlier studies that these web-like structures are made of chromatin and decorated with antimicrobial proteins. They also release oxygen intermediates and an antifungal substance called calprotectin.”

In collaboration with clinical researchers at the Children's Hospital in Zurich, the scientists from Umeå found new details behind CGD. They compared the function of a CGD patient's neutrophils before and after gene therapy.

“Our results clearly show that calprotectin is also important for the neutrophils immune defence against Aspergillus infection,” says Constantin Urban.

Together with PhD student Maria Joanna Niemiec in his group at MIMS and medical doctors in Zurich, Constantin Urban found that neutrophils from the CGD patient did not form NETs trap and were not able to release calprotectin. This was the reason why the neutrophils were not able to kill and digest Aspergillus cells anymore.

“We are confident that our study may lead to new treatment of CGD patients in the beginning of their life and prevent them from infections until they have the possibility to receive gene therapy or bone marrow transplantation, which are more sustainable treatments,” says Constatin Urban. “This possible treatment for CGD patients may also be an opportunity in the future for patients with other immune deficiency diseases.”