One day at Umeå School of Architecture

NEWS An exterior that attracts at a distance, and an interior that greatly differs from most educational spaces. But how is life at Umeå School of Architecture for staff and students? Let’s spends a day in the building by the river with students and teachers alike. 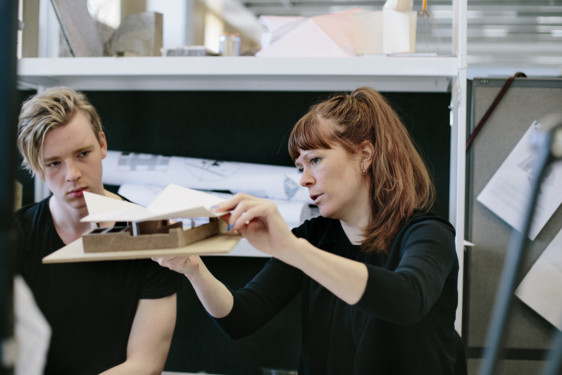 It’s a crisp May morning and the Umeå School of Architecture is a lit up cube, from corner to corner in all directions. Still, some seventy year one students gather at nine o’clock in the darkest room of the building.

“We’ll wait a couple of minutes to see if anyone shows up late,” suggests Amalia Katopodis, who is course coordinator for year one.

When she finally starts her presentation, she sounds both as a veteran and as one of the students:

“The creative process is like parkour, guys. We all need to avoid obstacles and find ways to keep moving forward. That’s what we do as architects, we keep finding solutions.”

“Scale is so important”

Only four weeks remain until the exhibition that all work is aimed at, but lots of hard work still remain. Amalia Katopodis is running through some important scheduling details and is egging her students on.

“We must be using the right scale when developing our ideas, and slowly zoom in. Scale is so important. One of the reasons that teachers advise against using computers is that they make you lose an eye for scale. We must make our decisions gradually. The adjustments we make in scale 1:1000 or 1:100 are not the same as the ones in scale 1:50 or 1:20,” she emphasizes.

On the front row, the year one teachers are lined up: Sara Thor, Toms Kokins and visiting lecturer Pablo DeSoto. Sara Thor comes from Gothenburg but has worked in practice in England for many years. She has spent two academic years in Umeå now, which has been a positive and constructive time.

“There are about 20 of us teachers, but some only work part-time. And there are about seven or eight administrative members of staff. It’s a rather small institution,” says Sara Thor.

“We can take a maximum of 248 students, and at present there are a few less as we had no newly admitted master students last year. But we are kicking off a new Master’s programme this autumn which has had a fair bit of international attention,” she says.

Upstairs is where the third-year students can be found. Here, all students have their workplaces in one big room that has been divided using shelving and dividers.

“The Master’s students are beyond the divide over there, and us year three students have our seats in the L-shaped part,” demonstrates student Stina Nordström.

“There are so many that come here and say ‘wow, so cool!’ However, there are pros and cons that it’s so open-spaced. You hear everything that is going on in the room, which can be somewhat disturbing at times. But it’s nice too, so it definitely has its advantages and disadvantages,” says Linnea Ågren.

In the break room, IT technician Sven-Erik Hilberer and economist Margareta Brinkstam are chatting over a cup of coffee. In Swedish, one must add. It can otherwise go days when people speak nothing but English.

“I came here from Umeå Institute of Design, so I’m quite used to speaking English. It’s rather stimulating in a way,” says Sven-Erik Hilberer.

“The language can be a challenge in issues regarding work environment for instance, when it’s tough to find the right nuances. But you get used to it.”

For first-year students, a great part of the spring semester has revolved around a project based on the train station area in central Umeå, Järnvägstorget, a part of the centre and Haga. The students are now working individually with imaginative buildings to fit into the neighbourhood. As suggested by the morning presentation, the students are advised to use pen and paper. There’s hardly a computer around.

The relaxed atmosphere makes it easy to forget how hard the students concentrate on their work at Umeå School of Architecture. In one corner we find one student slouching in a bean bag with big headphones and a laptop.

When we break his bubble of concentration with a question, we realise that he’s watching a documentary on architecture to prepare for an oral presentation. Being one of seventy people sharing one workplace, you have to think of creative solutions to shut yourself off.

To Sara Thor, the rest of the day will be spent on student tutorials. She takes a look at the booking list to see who comes next. It's Julia Herbert, whose drawings portray a circular building with a flat, green roof. One floor is a communal area, the other is a workshop with a thin greenhouse integrated with a curved glass wall. It’s tricky to get all the window details into the plan. The rounded lines make things more difficult.

Cohesion with the surroundings

“If you want a rounded window, I’d draw the detail in this manner,” instructs Sara Thor, showing her idea with her finger.

Julia Herbert takes out a few more sketches. The teacher’s suggestions are to make the sketches as clear to the beholder as possible.

“It’s easy to forget that those who see the drawings haven’t got the same idea or insight into the plan as me. You need to clear your mind and imagine that you’re looking at it for the first time,” says Julia Herbert.

Lunch time in the staff kitchenette. Visiting lecturer Pablo DeSoto from Spain is passionately talking about his research and his road to Umeå via Brazil. The time is approaching one o’clock. The rest of the teachers join for a short status report before they spread out again to have more individual tutorials.

In the School’s entrance, you can see a model of the Umeå train station area to scale, which the first-year students has created together. A few students are presenting the building process based upon maps and a comprehensive work to measure and map the actual city area was done in that process.

So what are the students’ impressions of education at the School? Do the teachers succeed in the task of developing their creative skills in the intended way?

“The teachers are a big part of it, they steer the ship in a way. But as students we also gain a fair bit of inspiration from each other. Things pop up everywhere to give us knowledge,” says Martin Smedsén.

Johan Vonkavaara agrees that the distance between students and teachers is short, and can’t see that it would be negative in any way:

“It’s what makes this education so great, them treating us like adults. This profession is all about finding solutions and new ways of going about business. If we were just given tradition lectures all the time, we wouldn’t get into that flow of mind.”

In the open plan office for teachers, it’s nice and calm. Only one person is sat at a desk working. It’s Carla Collevecchio, course coordinator for year two, who is having some well-needed office time.

“Recently, I’ve been with my students all the time, having briefs, tutorials or group conversations. I only spend roughly one day per week here.”

For nearly ten years, she’s worked simultaneously as an architect and as a teacher at the Central University of Venezuela. But she has now lived in Umeå together with her husband for nearly a year and a half.

“It’s a much smaller school, so it’s nice to be able to contribute in a meaningful way. I’m pleased about contributing to the entirety in a more evident way.”

On the wall next to Carla Collevecchio’s workplace hangs an aerial photo of the Norwegian island Træna, which is the scene for the major, joint project for the second-year students.

“Together with the people on the island, we have this Facebook group. There, the students can ask questions about what happens in a certain area of the island, and islanders immediately start sending pictures, maps and drawings.”

Sara Thor gets one final question before we leave the building: What is it that makes us find Umeå School of Architecture as such a harmonious and safe place?

“We work very closely with students and want them to feel comfortable enough to approach us. The building helps as well as it’s very open,” she says.

“From year one, a lot revolves around how students experience their own space at school. It’s all about the importance of respecting each other, and not making education into a competition. You gain a lot from collaborating. And our way of building upon that is for us teachers to treat the students and each other with respect. We’re not here to judge or criticize, but to help; like a team that builds together,” says Sara Thor.

Read more about the Architecture Programme (In Swedish)