NEWS To thrive and establish chronic infection in the very acidic stomach, the gastric pathogen Helicobacter pylori uses a specific protein to attach to the protective pH-neutral mucous lining. New research shows how the BabA adhesin protein has a pH-responsive mechanism allowing H. pylori to rapidly detach from old cells before they reach the brunt of the gastric acid. The release mechanism lets the bacteria return to the pH neutral mucous lining and recycle the infection. The Umeå University-led research findings are published today in Cell Host & Microbe. 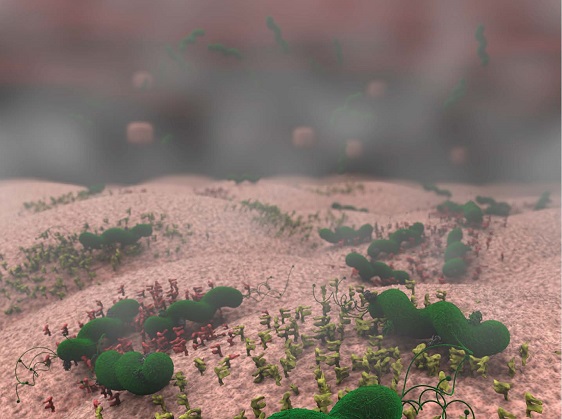 H. pylori (dark green) uses a protein to attach tightly to cells in the stomach lining. The cells eventually dislodge in the rapid turnover of epithelial cells and leave the pH-neutral lining (see illustration background). An acid responsive inactivation of the protein detaches H. pylori before it reaches the gastric juice and the bacterium returns and reattaches to the stomach lining. Illustration by Stefan Lindström.

According to the new research, such daily recycles of the infection constitute an active and selective evolutionary mechanism where only the bacterial cells that are best fit for the day and situation will adapt, survive and fortify the chronic infection. The new results also suggest that BabA adaptation to elevated pH-levels in the stomach can contribute to the so-called silent killer, gastric cancer.

"We have shown earlier that H. pylori, which is one of the most common infections worldwide and the causative agent for peptic ulcer disease and also cancer, uses adhesin proteins to attach to the stomach,” says lead-author Thomas Borén, professor at the Department of Medical Biochemistry and Biophysics at Umeå University in Sweden.

“We have now found that the H. pylori’s BabA attachment protein is equipped with a pH-sensor mechanism. This fascinating mechanism allows the bacterium to detach from the shedding stomach cells and swim back into the protective stomach lining when the bacteria become threatened by increasing acidity of surrounding gastric acid. This ingenious survival mechanism allows the bacterium to thrive in this extreme environment by recycling the stomach infection.”

The discovery was made in a large collaborative efforts by researchers in Sweden at Umeå University, SciLifeLab in Solna, Gothenburg and Örebro universities, and in Belgium, Germany, France, UK, Ireland, Greece, Ukraine, India and the United States. The researchers studied the adhesion mechanisms using detailed biochemical analyses and state-of-the-art genetic systems, combined with unique H. pylori clinical strains and biopsy-materials collected from individual patients and animals over a span of many years.

H. pylori thrives in the gastric epithelium and in the very thin layer of overlying mucus that protects the stomach wall from the peptic acid, a special niche that is hostile to nearly all other microbes. The study shows that the BabA adhesin responds to changes in acidity. Low pH-levels, such as that of gastric acid, disrupts the BabA’s binding activity. However, the binding is restored by acid neutralization, i.e. when H. pylori returns to the more neutral environment in the stomach cell-lining. Furthermore, the number of pH-sensor sequences in the BabA adhesin’s binding domains determine its pH responsiveness.

“Our findings suggest that BabA enables H. pylori to tightly adhere to the mucosal layer. But the pH-responsiveness also allows the bacterium to escape a certain death by detaching from epithelial- and mucus cells that are shed into the gastric juice,” says Jeanna Bugaytsova, researcher at Department of Medical Biochemistry and Biophysics and first-author of the article.

According to the researchers, the acid sensitivity of BabA differs between H. pylori strains and different regions of the stomach. The researchers also show how diversity and adaptation in BabA adhesins’ pH-sensitivity is driven by inflammation and disease progression. Changes in BabA binding properties, through mutation and recombination with BabA-related genes, evolve due to differences between individual hosts and changes in gastric acidity over time. Such changes could be due to gastric disease development or the consequence of long-term use of acid-suppressing drugs that cause changes to the stomach pH-levels, i.e. changes that contribute to more rapid adaptation by mutations of H. pylori.

An estimated half of the world’s population carries H. pylori, which can change rapidly according to new gastric conditions and disease. Many carriers develop symptoms of gastritis and about one in five will, at some point in their life, develop peptic ulcers, in many cases a fast and deadly disease. Both gastritis and peptic ulcer disease are treated with antibiotics; treatments that often require two to three different kinds of antibiotics and still do not cure all patients. In Sweden alone, there are about three million people carrying the bacterium. Chronical H. pylori inflammation can at worst cause gastric cancer, a highly mortal and hard-to-treat form of cancer that affects 1 million people yearly worldwide.

Link to the article in Cell Host & Microbe