NEWS EcoChange researcher Joanna Paczkowska has focused on the base of the food web, to figure out what climate change will do to the ecosystem along a north-south gradient in the Baltic Sea. She proves that carbon compounds originating from land have a great impact on the structure and function of the important phytoplankton communities. The results are highly relevant for future management of the Baltic Sea. 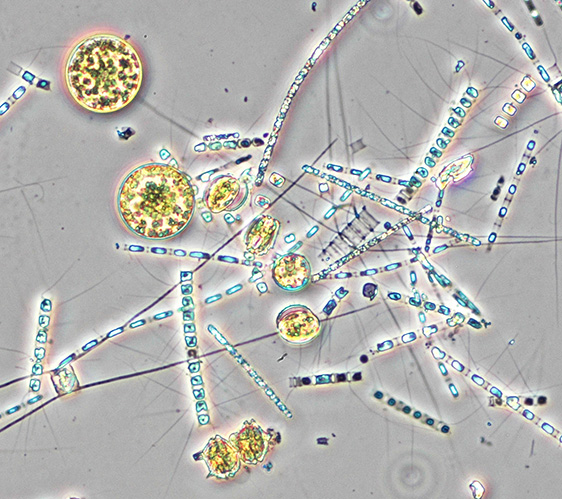 Spring bloom of phytoplankton. Marine phytoplankton contribute to half of the primary production on planet earth. Photo: Siv Huseby/UMF.

What do you think about when you hear the expression food web? Maybe that plants are eaten by small animals, which are eaten by larger animals, which are eaten by the largest carnivores. The marine food web is a lot more complicated than that, especially the lowest parts, where energy, carbon and nutrients are built into the system. In the Baltic there are large differences in the constitution of the basal parts of the food web in the north compared to the south. Therefore, the climate change will have a different impact on the marine food web in the Bothnian Bay compared to the Baltic Proper. Joanna Paczkowska at Umeå University has looked into details of the food web, to figure out how the Baltic Sea ecosystem will react on climate change. She has now successfully defended her thesis.

Phytoplankton play an extremely important role in sea water. They are autotrophs, which means that they can produce organic matter from carbon dioxide from the atmosphere and sun light by performing photosynthesis. This function, also called primary production, is the dominating way to build new carbon and energy into the ecosystem. Marine phytoplankton contribute to half of the primary production on planet earth. The phytoplankton are regulated by many different factors, where nutrients, light and temperature are the most relevant.

A close-up study of the system reveals another important player in the marine food web; bacteria. Bacteria are heterotrophs, which means that they are incapable of performing photosynthesis. Instead they have to rely on other organisms to create the organic carbon. Bacteria can use the easily available organic compounds which leak out into the water from the phytoplankton. River water and other runoff from land also contains a lot of dissolved organic matter, especially when the surrounding land consists of peatland. These organic compounds are less available to the bacteria, but since they occur in such redundance they contribute to making the bacteria less dependent on the organic matter produced by the phytoplankton.

In the amazing marine ecosystem there is a very special group of organisms at the bottom of the food web, the mixotrophs. Mixotrophs are both animals and plants at the same time - they can photosynthesize, but can also eat other organisms. In certain conditions, mixotrophs seem to be able to outcompete both autotrophs and heterotrophs, since they can use light when conditions are suitable and obtain organic compounds when available. The competition between autotrophs, heterotrophs and mixotrophs results in a balance between the different types of organisms. A balance which easily can be changed when conditions are altered.

Brown water in the north

In the northern parts of the Baltic the run-off water is coloured brown by the extensive peatlands in the water shed area. The colouring of the water decreases the phytoplankton production, while the bacteria benefit from the large amounts of organic matter in the run-off water. Therefore, the balance between the different types of organisms differs between the different parts of the Baltic. Not only does the balance between autotrophs, heterotrophs and mixotrophs differ, the varying conditions have a large impact on the production, size-structure and nutritional strategy of the phytoplankton.

In her thesis, Joanna Pazckowska focused on the role of dissolved organic matter originated from land, ADOM, as this is expected to increase in the future as an effect of climate change. Quite right, she found that the ADOM was one of the most important factors governing the phytoplankton community. In the north, where ADOM concentrations are high, the bacteria/phytoplankton ratio is high. In this area the phosphorus concentrations are low, and in contrast to the more southern Baltic Proper the system is phosphorus-limited. The lower light quality, special nutrient conditions and the large concentrations of ADOM seems to favour both heterotrophs and mixotrophs.

Within the phytoplankton community, the ADOM seems to have an impact on both size structure and content of chlorophyll a. Chlorophyll a is the main pigment involved in photosynthesis, and is regurlarly measured within monitoring programmes as a proxy for phytoplankton biomass. However, Joanna Paczkowskas thesis proves this to be a less accurate estimate for production. The main reason for that is the phytoplanktons ability to acclimatise to lower light conditions by changing their cellular chlorophyll content.

Joanna Paczkowskas thesis clearly shows that the effects of climate change on the Baltic Sea conditions will have a large impact on the size structure of phytoplankton communities. Small phytoplankton generally have a more effective photosynthesis, due to the relatively higher and more evenly distributed chlorofyll a content within the cells. The small size also promotes nutrient uptake, which can be explained by the higher surface/volume ratio. Therefore, small phytoplankton can become dominant under low-nutrient and light-limited conditions. With increasing nutrient concentrations smaller cells are replaced by larger ones. A shift towards smaller size phytoplankton, which can be expected in future as a result of climate change, will lead to a larger number of steps in the food chain and thereby a less efficient food web.

Management needs to adapt to changes

The different parts of the Baltic, and especially the estuaries, are complex ecosystems where the conditions change continuously. Joanna Paczkowska shows in her thesis that some of the effects of climate change markedly will impact the food web of this area. She shows that the base of the food web will change, and that size structure and nutritional strategies of phytoplankton will go through a shift. This might have effects on the food web that not yet are clearly understood. As an example, the transport of pollutants into the food web may very well be influenced by the changes. The importance of developing methods to include measurements of the ecological function in monitoring is clearly pointed out in the thesis.

This article in Swedish