NEWS With the use of the new super material graphene, Swedish and American researchers have succeeded in producing a new type of lighting component. It is inexpensive to produce and can be fully recycled. 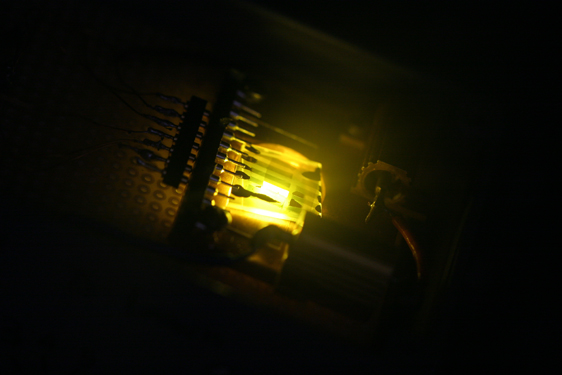 The invention, which paves the way for glowing wallpaper made entirely of plastic, for example, is published in the scientific journal ACS Nano by scientists at Linköping University and Umeå University, in Sweden, and Rutgers, The State University of New Jersey.

Ultra-thin and electricity-saving organic light diodes, so-called OLEDs, have recently been introduced commercially in mobile phones, cameras, and super-thin TVs. An OLED consists of a light-generating layer of plastic placed between two electrodes, one of which must be transparent. Today’s OLEDs have two drawbacks – they are relatively expensive to produce, and the transparent electrode consists of the metal alloy indium tin oxide. The latter presents a problem because indium is both rare and expensive and moreover is complicated to recycle. Now researchers at Linköping and Umeå universities, working with American colleagues, are presenting an alternative to OLEDs, an organic light-emitting electrochemical cell (LEC). It is inexpensive to produce, and the transparent electrode is made of the carbon material graphene.

“This is a major step forward in the development of organic lighting components, from both a technological and an environmental perspective. Organic electronics components promise to become extremely common in exciting new applications in the future, but this can create major recycling problems. By using graphene instead of conventional metal electrodes, components of the future will be much easier to recycle and thereby environmentally attractive,” says one of the scientists, Nathaniel Robinson from Linköping University.

Since all the LEC’s parts can be produced from liquid solutions, it will also be possible to make LECs in a roll-to-roll process on, for example, a printing press in a highly cost-effective way.

“This paves the way for inexpensive production of entirely plastic-based lighting and display components in the form of large flexible sheets. This kind of illumination or display can be rolled up or can be applied as wallpaper or on ceilings,” says another of the scientists, Ludvig Edman from Umeå University.

Graphene consists of a single layer of carbon atoms and has many attractive properties as an electronic material. It has high conductivity, is virtually transparent, and can moreover be produced as a solution in the form of graphene oxide.

Researchers all over the world have been trying to replace indium tin oxide for more than 15 years. Indium is in short supply, and the alloy has a complicated life cycle. The raw material for the fully organic and metal-free LEC, on the other hand, is inexhaustible and can be fully recycled – as fuel, for example.

Permission to use the image can be requested at:
http://pubs.acs.org/page/copyright/rightslink.html