NEWS Researchers at Laboratory for Molecular Infection Medicine Sweden (MIMS)/Umeå University in Sweden participated in the discovery of a unique system of acquisition of essential metals in the pathogenic bacterium Staphylococcus aureus. This research was led by scientists at the CEA in France, in collaboration with researchers at the University of Pau, the INRA and the CNRS. It represents a new potential target for the design of antibiotics. These results are being published in the journal Science on Friday 27 May. 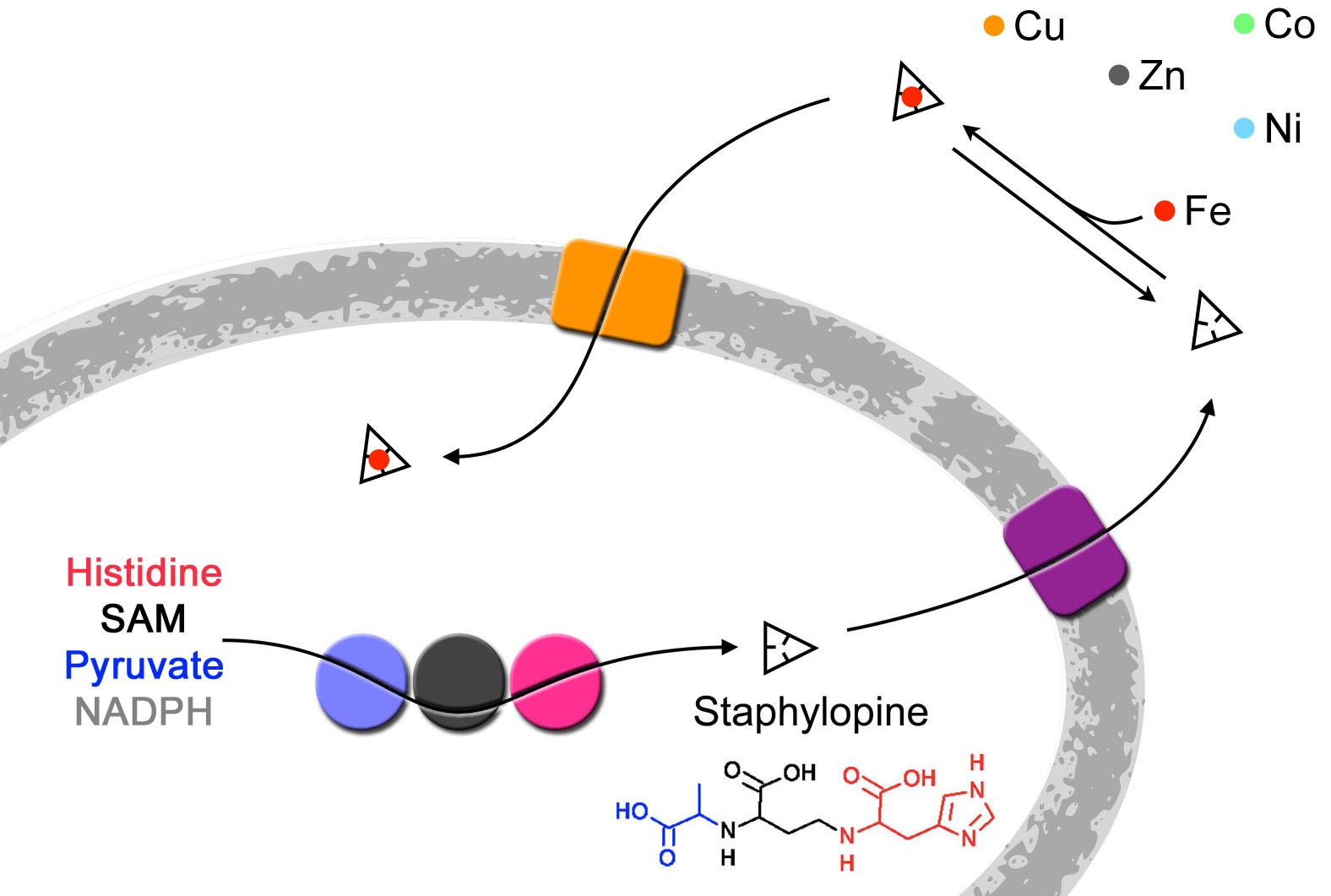 Metals are necessary for life and pathogenic bacteria have developed elaborate systems to compensate for the low concentration of these essential metals in their environment, in particular within a host. The case of iron is particularly well documented with, in some bacteria, the production of molecules called siderophores that specifically capture iron in the medium. Researchers have now identified a new metal scavenging molecule produced in the bacterium Staphylococcus aureus and baptized it staphylopine.

The researchers highlighted the role of the key players that allow the pathogen to acquire a wide range of essential metals in the environment, such as nickel, zinc, cobalt, copper and iron (Figure). Three enzymes, whose functions were unknown so far, allow the production of staphylopine by the combination of three building blocks (D-histidine, amino butyrate and pyruvate). An export system expels staphylopine out of the cell where it traps the target metals from the extracellular medium. The staphylopine / metal duo can then be picked up by the cell via a specific import system (Figure). In the absence of these import / export systems, the virulence of Staphylococcus aureus was known to be reduced, although the origins of this phenomenon were not fully understood.

“Remarkably, a few years ago we found that many, taxonomically unrelated, bacteria can release high concentrations of a wide variety D-amino acids to the environment. Therefore, D-histidine might be just one D-amino acid of many that could serve as building block of novel staphylopine-like molecules,” explained Felipe Cava from MIMS/Umeå University, who made the discovery together with doctoral student Akbar Espaillat and colleagues in France.

The discovery of staphylopine, how it is built, and how it is transported by these systems could now open the way for the development of a new strategy against pathogenic bacteria, by targeting their addiction to metals.

Surprisingly, staphylopine closely resembles nicotianamine, a molecule that is found in all plants and that ensures the transport of essential metals from the roots, where they are collected, to the various aerial organs. The discovery of a similar metal scavenger in the three kingdoms of life (archaea, eukaryotes and now bacteria) suggests an ancient origin for this type of molecule.

Caption: Model of staphylopine function, involving three biosynthetic enzymes (blue, gray and fuchsia) that use common precursors, one exporter (magenta), and an importer belonging to the family of ABC transporters (simplified here in orange).