The search for new materials for hydrogen storage

NEWS Hydrogen is the ideal fuel for new types of fuel cell vehicles, but one problem is how to store hydrogen. In his doctoral dissertation Serhiy Luzan studies new types of materials for hydrogen storage. He also shows that new materials with interesting properties can be synthesized by the reaction of hydrogen with carbon nano-structured materials. The dissertation will be publicly defended on September 28 at Umeå University. 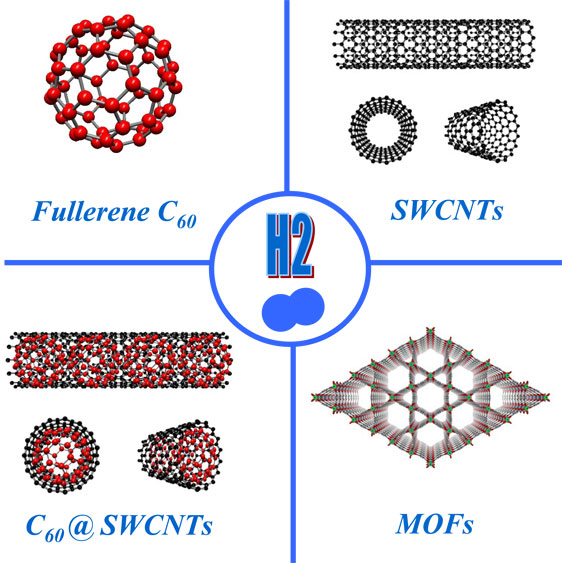 New car engines that run on hydrogen produce only water as exhaust and are three to four times more efficient than ordinary internal combustion engines. Just one “small” problem is hampering the development of hydrogen-powered vehicles: there is no good method for storing sufficient amounts of hydrogen, as it is a gas of very low density.

Serhiy Luzan devotes the first part of his dissertation to studies of hydrogen storage in exciting new types of materials: metal-organic frameworks (MOFs). They consist of zinc- and cobalt-based metal clusters linked together via organic linkers, and they are extremely porous. One gram of MOF has a hydrogen-absorbing surface that is larger than a football field! Dozens of new MOF materials are synthesized each year, which is highly promising for the next generation of hydrogen storage materials.

Serhiy studied the hydrogen absorption of several new MOFs and researched the effects of different surface areas, pore volumes, and pore forms on the hydrogen storage parameters. MOFs can store record amounts of hydrogen at very low temperatures, but the hydrogen capacity at room temperature is not good enough. Luzan therefore studied new methods to enhance this capacity. Addition of metal catalysts has previously been reported to improve hydrogen storage considerably.

“But in my study, the effect of metal catalysts addition on hydrogen absorption in MOFs was not confirmed,” says Serhihy Luzan.

Hydrogen is of interest not only as a fuel but also for chemical modification of nano-structured carbon materials, such as carbon nanotubes, fullerenes, and graphene. Graphene is a single layer of carbon atoms. Carbon nanotubes also consist of pure carbon, in the form of graphene layers rolled into a cylinder. Fullerene, C60, consist of sixty carbon atoms arranged in five- or six-vertices figures, just like the pattern on a soccer ball. There are carbon materials that are stronger than steel, conduct current better than copper, and diffuse heat better than diamond.

In the second part of the dissertation Luzan describes the materials he created by the reaction of hydrogen with fullerenes and carbon nanotubes.

Luzan studied the reaction between fullerene C60 and hydrogen at elevated temperatures and hydrogen pressures, with and without the addition of metal catalysts. The reaction resulted in the formation of hydrogenated fullerenes, C60Hx. Upon extended hydrogen treatment, the fullerene structure fragmented and collapsed. This outcome shows that it is possible to break down fullerenes stepwise into smaller cup-like molecules, which are stabilized by hydrogen atoms. This is a structure that was previously difficult to achieve.

“With this method, we should be able to use fullerenes as a relatively inexpensive source material for creating new molecules that hopefully would retain interesting properties from the original carbon nano-material,” says Serhihy Luzan.

Hydrogenated graphene (graphane) is expected to be an ideal material for new carbon-based electronics, but graphane is difficult to synthesize by a direct reaction between graphene and hydrogen. It is much easier first to hydrogenate carbon nanotubes and then to cut them along the tube axis into so-called nanoribbons, which have hydrogen covalently bonded to the surface.

Luzan’s experiments showed that the reaction between single-wall carbon nanotubes and hydrogen is possible if a suitable catalyst is used, and he was able to observe that some of the nanotubes were converted to graphene or graphane nanoribbons.

Read the whole or parts of the dissertation at: