Uptake of mercury in focus

NEWS Erik Björn, researcher at the department of Chemistry at Umeå University, has together with his research group performed several conspicuous studies on methylmercury in aquatic environments, and how climate change will affect the amounts of this toxin in the ecosystem. However, an important but still open question is how the mercury is taken up by the bacteria that transform inorganic mercury into the extremely toxic methylmercury. The researchers have now gotten the opportunity to work with answering the question. 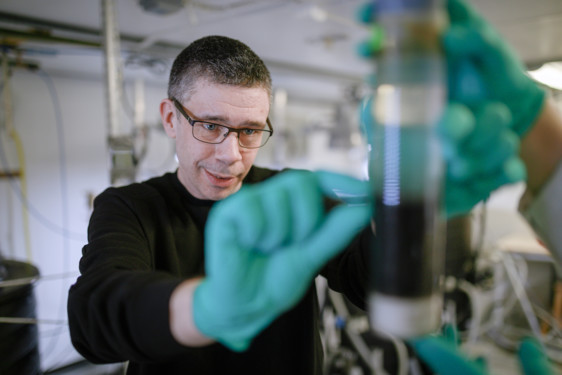 Mercury is regarded as one of the top ten chemicals of public health concern according to the World Health Organization, WHO. The problem with mercury in the environment is global. In Sweden, the thresholds are exceeded in ten thousands of lakes. The mercury is mainly dispersed in the inorganic form, but is transformed by bacteria in aquatic environments to the far more toxic methylmercury.

There has been a lot of research done on dispersal and effects of mercury in the ecosystems, but only a few studies have focused on the uptake mechanisms of the bacteria.

"Until now it has been very difficult to perform these kind of studies, mainly because the analytical methods have been insufficient. We know that thiol compounds are involved, but we need to understand by which molecular mechanisms these thiol compounds control the uptake", says Erik Björn.

By working resolutely for several years with developing new methods the research group has now come to the point where they have the possibility to study what really happens when the mercury is taken up by the bacteria.

"It will be so exciting to finally be able to figure out the mechanisms behind the bacteria’s uptake and transformation of the inorganic mercury. The results from our research will be important for the understanding of mercury turnover in the environment, and will be a great help in making risk assessments of mercury now and in the future. We expect our research to close some very important links, which have been missing so far."

The research project is granted by the Swedish Research Council for four years.