NEWS If climate change will increase precipitation, the river run-off to the sea will increase as well. How will that affect the marine food web in the coastal areas? Right now, a European research team is trying to find that out in the mesocosm laboratory at Umeå Marine Sciences Centre. 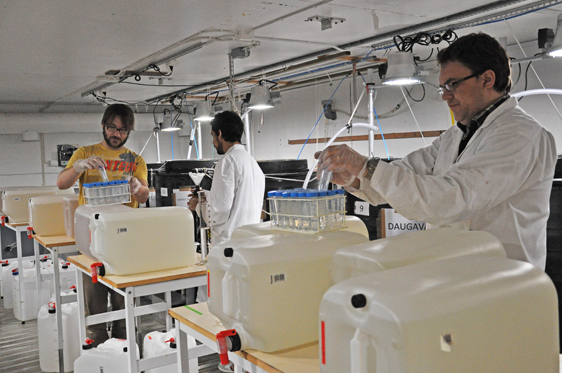 The ongoing experiment addresses the question: will increased river inflow cause a shift in the marine food web, from being dominated by phytoplankton towards becoming dominated by bacteria? In the mesocosms the researchers are trying to mimic the natural spring flood conditions. All tanks are filled with sea water containing the entire food web: bacteria, phytoplankton, and zooplankton, with juvenile perch added.

Due to different land use and population size in the surroundings, each river entering the Baltic Sea has its own specific ratios between carbon (C), nitrogen (N) and phosphorus (P), as well as its own brown hue due to concentration of dissolved organic carbon (DOC). Therefore, three of the mesocosms are being daily treated with water similar to the spring floods discharged into the Gulf of Bothnia, and three with water similar to the spring floods entering the southern Baltic proper. The simulated river inflow water is prepared from soils extracts collected in the runoff regions of one river entering the Bothnian Sea and one entering the Baltic Proper.

Food web shift in the north, eutrophication in the south

The rivers in the north originate from areas mostly used for forestry and therefore they’re often quite brown, have high concentration of DOC and humics relative to the N and P. The southern rivers originate from surroundings mostly used for agriculture and therefore have less brown water and lower concentration of DOC relative to N and P. If climate change causes increased precipitation in the northern parts, we’ll have an increase in the discharge of this brown, DOC-rich and N- and P-poor water. This could seriously affect the marine life in coastal regions. 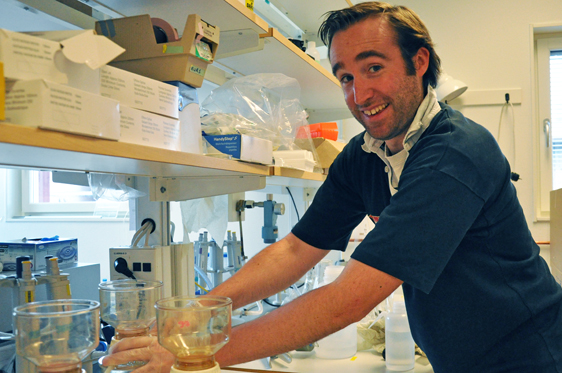 - The base of a normal marine food web is dominated by phytoplankton. Phytoplankton are limited by light and the amount of N or P available. Bacteria on the other hand, are limited by C and compete with phytoplankton for N and P. If a lot of brown and DOC-rich water is discharged – which is the case in the north during spring – the bacteria all of a sudden have boosted access to C at the same time as the light climate gets poorer, and that could cause a shift in the food web, explains Owen Rowe, Assistant Professor in marine ecology at Umeå University and one of the researchers behind the experiment.

In the southern Baltic sea it is, on the other hand, more likely that increased river inflow will cause eutrophication and phytoplankton blooms: the phytoplankton having access to copious amounts of N and P, and a good light climate.

Until now, the scenario in the Baltic Proper has been thought to be the true story for the Gulf of Bothnia as well. But recent findings by researchers in the Ecochange programme have turned everything upside down. They’ve been examining possible indications of a shift in the food web, from phytoplankton dominance to bacteria dominance, in the Öre and Råne river estuaries in the Bothnian Sea and Bay. Their findings compose the basis of the ongoing mesocosm experiments.

The origin of carbon – a key question 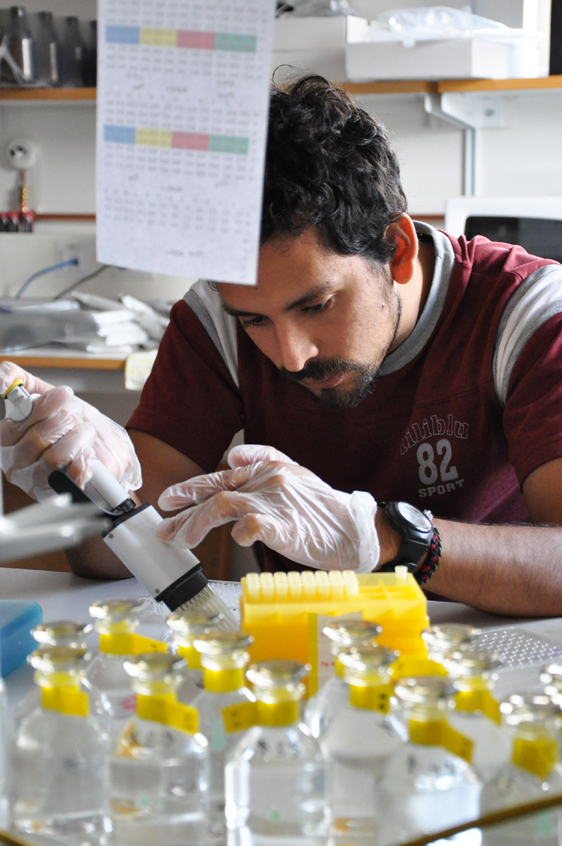 The bacteria-dominated food web is less efficient and transfers energy less directly than a normal marine food web. That could mean lower food availability for fish. If this bacteria-based food web becomes the dominant one, it could be detrimental for the fish in the Gulf of Bothnia and the fish populations even diminish. In other words, one could say that one effect of climate change could be less fish in the Gulf of Bothnia, or at least more severe competition for food.

To see if C originating from the soil actually gets incorporated in the food web, allowing bacteria to remove their reliance on phytoplankton derived carbon, allowing a shift towards bacteria-dominance, the origin of C in all fractions of the food web is set by following signals from stable isotopes of carbon and hydrogen, differentiating the phytoplankton created carbon and that of terrestrial origin.

Sampling from the mesocosms is done twice a week. In addition, the abundance, community structure and production in the different organism groups is measured, as well as numerous physicochemical parameters.

The results from the experiments aren’t to be expected to be completed maybe till next spring, but the setup seems to be working well and after two weeks the experiment is running smoothly.

- So far we see clear treatment effects already, and we really hope to be able to trace measurable effects of the C, N and P ratio treatments all the way up to the fish. That hasn’t been done in marine systems before. The longer the experiment runs and the fish still have food to eat, the higher the chance to see changes throughout the food web, says Owen Rowe.