Nina works with many different types of construction projects

When the architect education was coming to an end, Nina Larsson took a break from studying, worked at a café for a while and practiced at a construction consulting company in Umeå, TM. This led to her getting a job there as an architect immediately after graduating 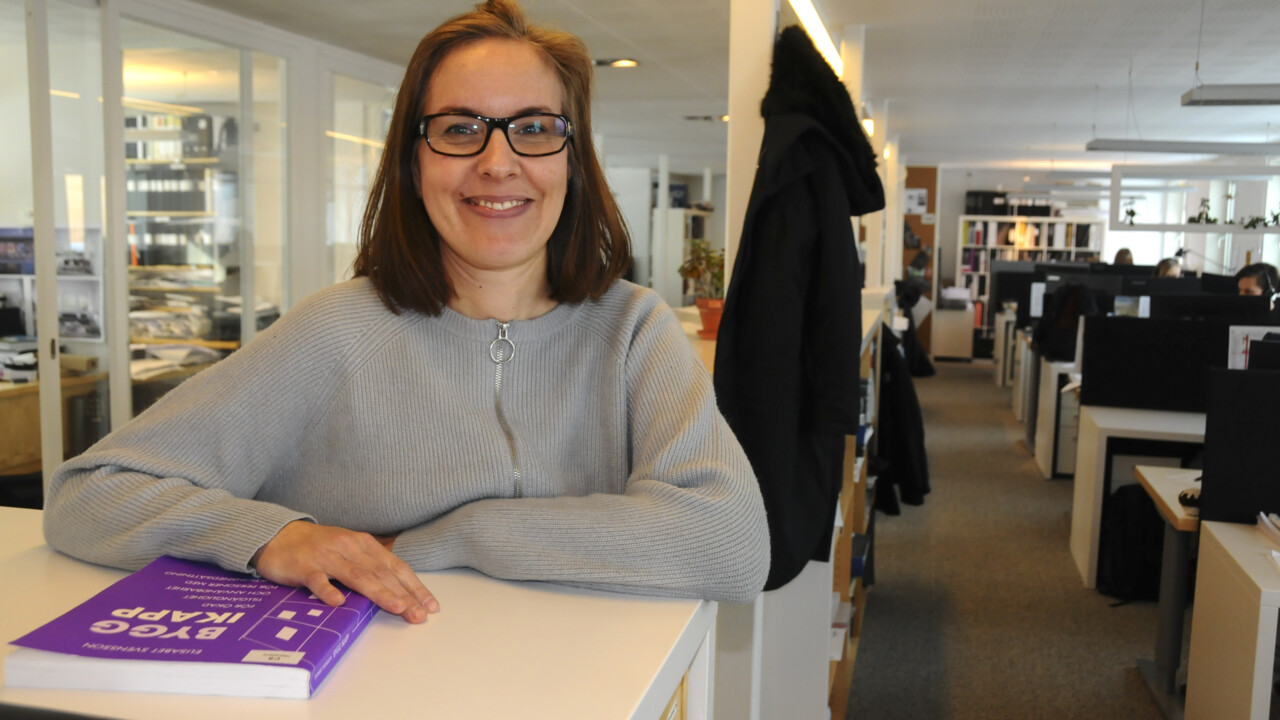 Nina Larsson is an architect at TM in Umeå and works with many different construction projects. "My role is to schetch and draw, then an engineer takes over."

“I have been involved in very different kinds of projects, everything from detailed planning work to sketching different spaces, she says. Just when I started at the company, we did a lot of work at the hospital, the new psychiatry building that has not yet begun to be built. There I have sketched small parts such as a waiting room and reception. I'm still learning.”

Nina Larsson took a crooked path before she decided to become an architect. After high school, she moved abroad, and lived for a few years in England and Australia. There she studied different courses at universities in the humanities, including French and Design history, and had various jobs, mostly in restaurants, but also as an administrator in an organization for professional dancers.

At the age of 25, she moved back home, studied at ABF's Art school in Umeå, studied sewing and practiced in theaters. But, what would she become? Something in scenography maybe? While she was thinking, the Umeå School of Architecture started at Umeå University and Nina felt that it would be something for her. The following year, 2010, she began the architecture programme.

“What caught me was that it was a broad education that suited my societal interest. At the same time, I would get to be creative and it felt like you as an architect can make a difference.”

TM, where Nina has been working for just over six months, is Norrland's largest construction consulting company. The company has offices in Umeå, Lycksele, Örnsköldsvik, Sollefteå, Härnösand, Kramfors, Sundsvall and Skellefteå. The company has a total of 84 employees, both architects and civil engineers and experts in, among other things, electricity and ventilation.

Many people probably have a picture of the architect as a person who sketches at his drawing table all day. Is that so in reality?
“Haha, no, there are not so many drawing tables, says Nina. We draw on the computer and in between you have meetings with customers, show what you have done, they take it on to their business, we have meetings again and then maybe you draw something. You often have several projects running at the same time.”

Do you work a lot in teams?
“Yes, in a way. You are in the projects at different stages. My role is that I sketch and draw, then it is an engineer who takes over and designs and does construction documents.”

"Nice feeling when the pieces fall into place"

How do you think when designing different solutions?
“You always try to put people in focus and get to know how the building would be used. At the hospital, where we have had several projects, it is very much about wanting to create security for patients.”

When is your job most enjoyable?
“When you get a brilliant idea or when all the pieces fall into place, it's a nice feeling. As of now I have not yet experienced that something I designed has been built, but it would be very cool to see.”

How has the education prepared you for the job you are doing now?
“The process itself has been important in the education and it has of course prepared me for how to think when you move through a project. However, the time you had for the process during the training may not really exist in reality. What I brought with me from the education is also a social pathos and to be able to see connections and pick up theory connected to what you do at work.”

Are there things you would have liked more of in the architectural education?
“The school becomes a bit like a sheltered workshop. For me, it was very good to come out and have practice. It is not a compulsory part of the education, but many do it anyway. Even though it's nice to be able to be visionary and think freely, it's still in reality you have to work.”

Was it difficult to get a job after the education?
“No, I had one foot inside because I practiced here. But several of those I studied with have had to move to get a job or commute.”

What do the development opportunities look like? Is it about gradually getting bigger projects or is it natural to move on to other agencies?
“Both and, it is probably quite common to move around, but you also get more and more responsibility the more experience you get. After two years of professional experience, you also get the SAR title.”

The professional title "Architect SAR" is issued by the industry and professional organization Swedish Architects and serves as a quality guarantee for architects. To receive the title, you must have a bachelor's and master's degree from architectural education and work as an architect within the EU for at least two years.

What would be a dream project for you?
“Hard to say, but it would be a project where you get to engage people and run the process together with them. But, it is then important that you can justify the time it takes and the money it costs to work like that. In the degree project that I wrote with two others, we worked with Stöcke outside Umeå, where the population wanted a meeting place in the village. This work led to the formation of an interest group that took over the operation of a mission house that was not used much and they are trying to finance the construction of a sports hall.”

How do you see your studies in retrospect?
“It was really a journey and we had many incredibly committed teachers. What I have with me are also the ones I studied with, we were a bunch who found each other and came incredibly close. It was developing, but also hard. There is a kind of culture in architectural education working long nights, it is very pushy and you can feel that what you do is never good enough. I am glad that during my studies I had a family and could not be at school all the time, it is important to have a life outside as well.”

If you had someone in front of you who was thinking of studying to be an architect, what words would you send along the way?
“Do it! It's a great education. But, do not let it take up all your time, have a life on the side as well. It enriches what you do in school. Take the time and explore what you are interested in and would like to work with. There is a great breadth, I know for example those who have gone on to study free art or become journalists who write about architecture, so there are all possibilities.”

Age: 39 years.
Comes from: Vännäsby.
Lives: in an apartment at Haga in Umeå.
Family: partner and two children, 9 and 14 years old.
Education: Architect programme at Umeå University, graduated in 2017.
Works: as an architect at TM Konsult in Umeå.
Does in her free time: spends time with family and friends, likes to be out in nature, going to concerts, opera, theater and other cultural events.
Umeå in 3 words: Music. Commitment. Close.
What I will do in ten years: be working as an architect, but also as a teacher of architecture.