In an open space – A day at Umeå School of Architecture

An exterior that attracts at a distance, and an interior that greatly differs from most educational spaces. But how is life at Umeå School of Architecture for staff and students? Aktum editor-in-chief, Jonas Lidström, spends a day in the building by the river and opens up his senses to impressions. 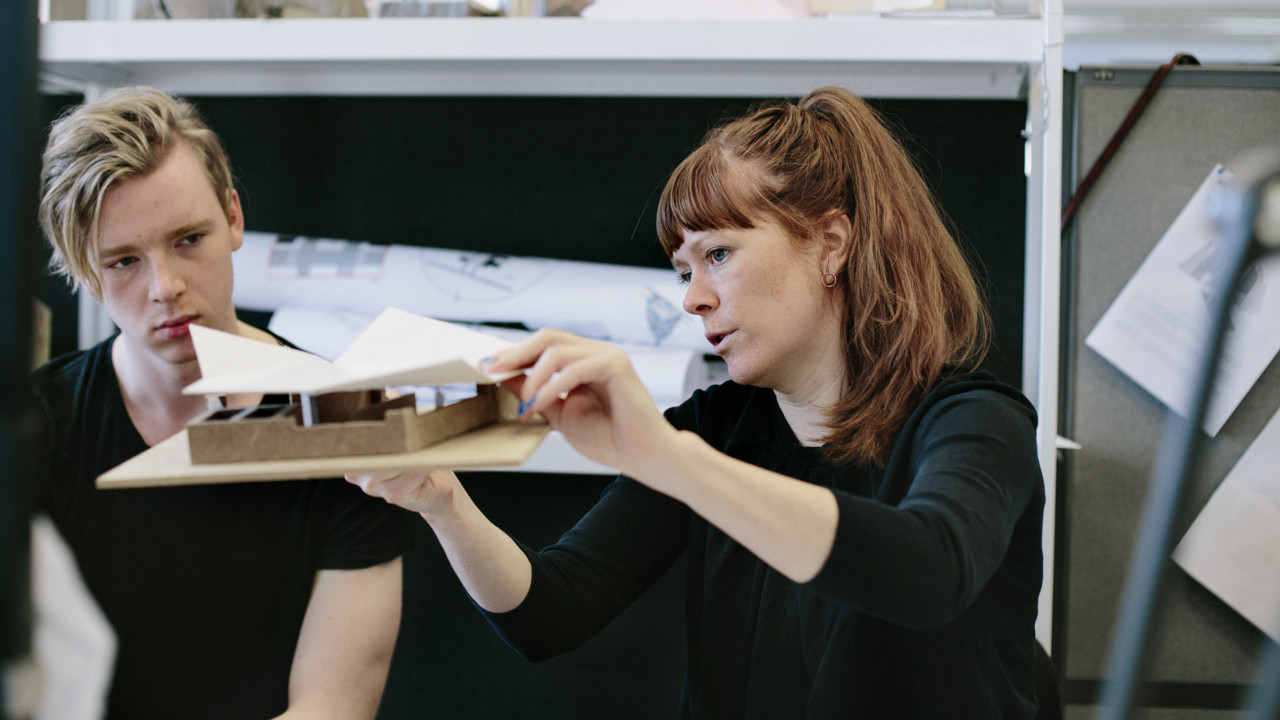 It's a crisp May morning and the Umeå School of Architecture is a lit up cube, from corner to corner in all directions. At the same time, some seventy first-year students gather at nine o'clock in the darkest room of the building. Only four weeks remain until the exhibition that all work is aimed at, but lots of hard work still remains.
"Shall we wait a couple of minutes to see if anyone shows up late," says Amalia Katapodis, who is course coordinator for year one. 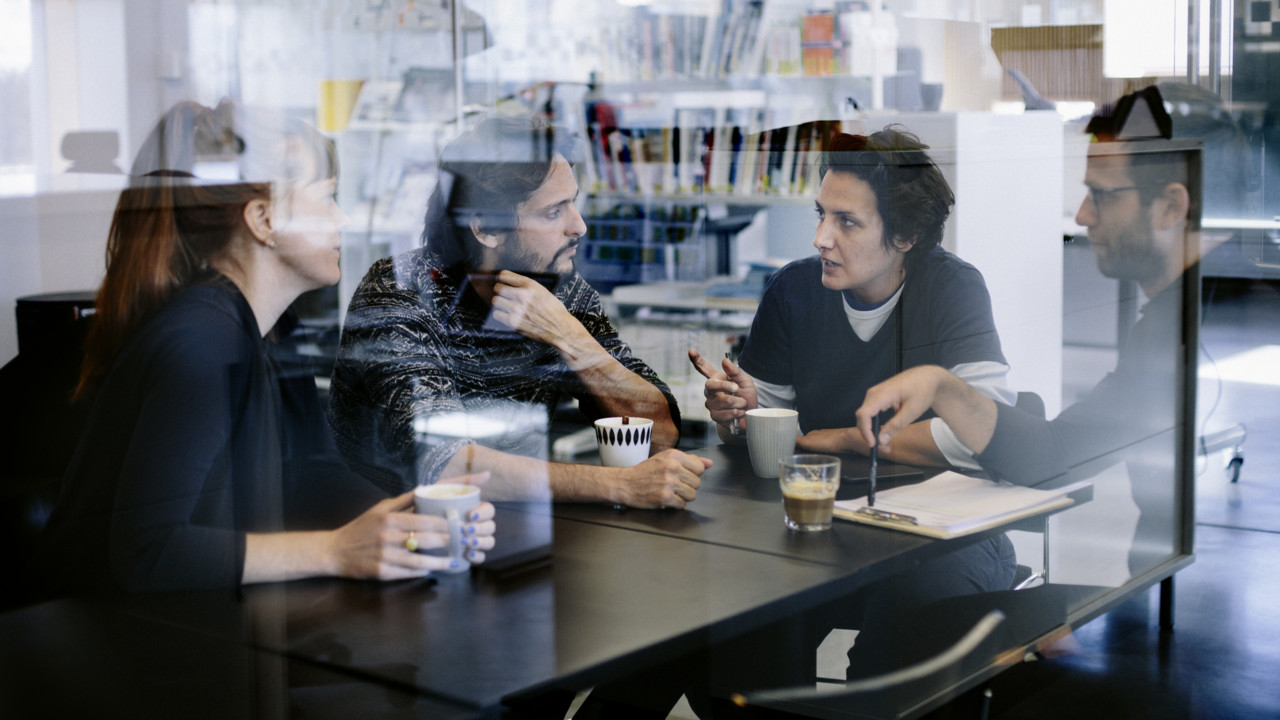 The team of teachers meet in the staff lunch room for a brief coordination meeting. From left: Sara Thor, Pablo DeSoto, Amalia Katopodis and Toms Kokins.

When she finally starts her presentation, she sounds both like a veteran and like one of the students:
"The creative process is like parkour, guys. We all need to avoid obstacles and find ways to keep moving forward. That's what we do as architects, we keep finding solutions."

One of the first year teachers is Sara Thor. Contrary to many others, she speaks Swedish. She is originally from Gothenburg but has worked in practice in England for many years. She has spent nearly two academic years in Umeå now, which has been a positive and constructive time. 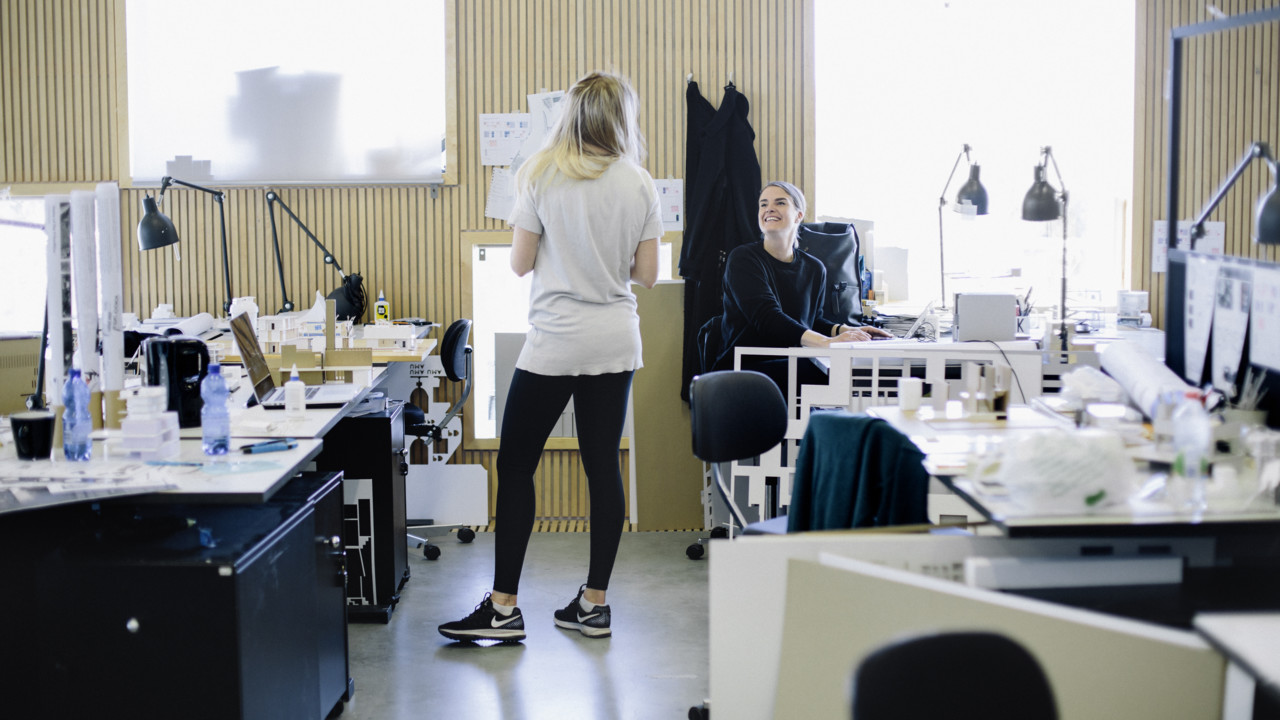 There are so many that come here and say ”wow, so cool!” However, there are pros and cons that it’s so open-spaced, reasons student Linnea Ågren, situated left in the photo, speaking to her desk neighbour Stina Nordström.

"There are about 20 of us teachers, but some only work part-time. And there are about seven or eight administrative members of staff. It's a rather small institution."
In the break room, I find IT technician Sven-Erik Hilberer and economist Margareta Brinkstam chatting over a cup of coffee. In Swedish, one must add. It can otherwise go days when people speak nothing but English.

"I came here from Umeå Institute of Design, so I'm quite used to speaking English. It's rather stimulating in a way," says Sven-Erik Hilberer.
"The language can be a challenge in issues regarding work environment for instance, when it's tough to find the right nuances. But you get used to it."

For first-year students great part of the spring semester has revolved around a project based on the train station area in central Umeå. In the School's entrance, you can see a model of the area to scale. A few students are presenting the building process based upon maps and a comprehensive work to measure and map the actual city area was done in that process. 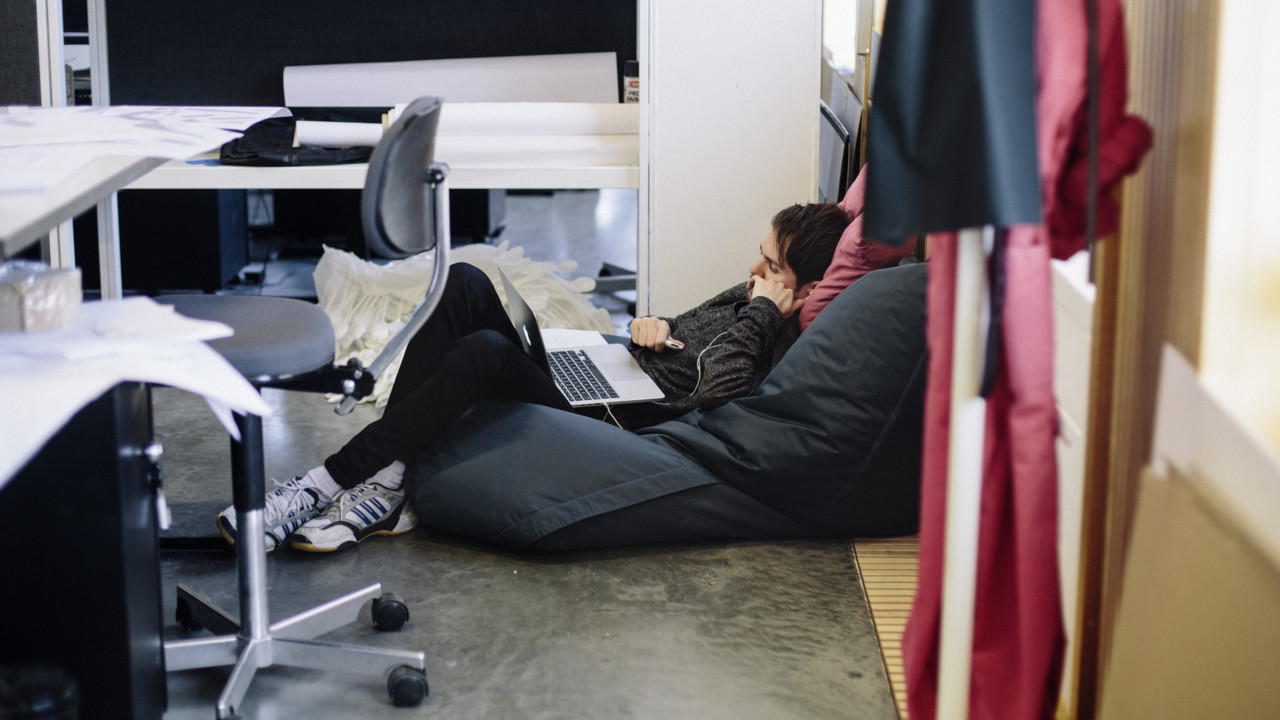 Student Gustav Söderhult is slouched down with his computer and headphones to watch a Japanese documentary film on architecture for a history assignment.

To Sara Thor, the rest of the day will be spent on student tutorials. She takes a look at the booking list to see who comes next. It's Julia Herbert, whose drawings portray a circular building with a flat, green roof.
"If you want a rounded window, I'd draw the detail in this manner," instructs Sara Thor showing her idea with her finger. 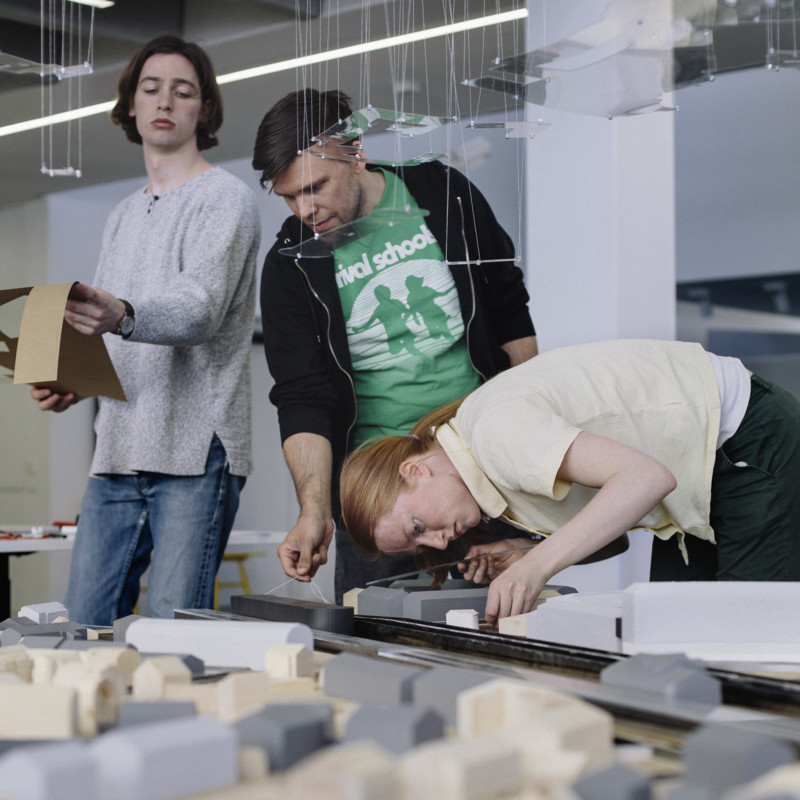 Students Mikael Parkman, Martin Smedsen and Tove Brunberg with the large model of the station area in central Umeå.

Julia Herbert takes out a few more sketches. "What's important is that the building does not only become its own volume, but to also provide a context," says Sara Thor.
Julia Herbert agrees. When her time is up, she returns to drawing.
"It's easy to forget that those who see the drawings haven't got the same idea or in- sight into the plan as me. You need to clear your mind and imagine that you're looking at it for the first time," says Julia Herbert.

Close to the students

Lunch time in the staff kitchenette. Visiting lecturer Pablo DeSoto from Spain is passionately talking about his research and his road to Umeå via Brazil. The time is approaching one o'clock. The rest of the teachers join for a short status report before they spread out again to have more individual tutorials. 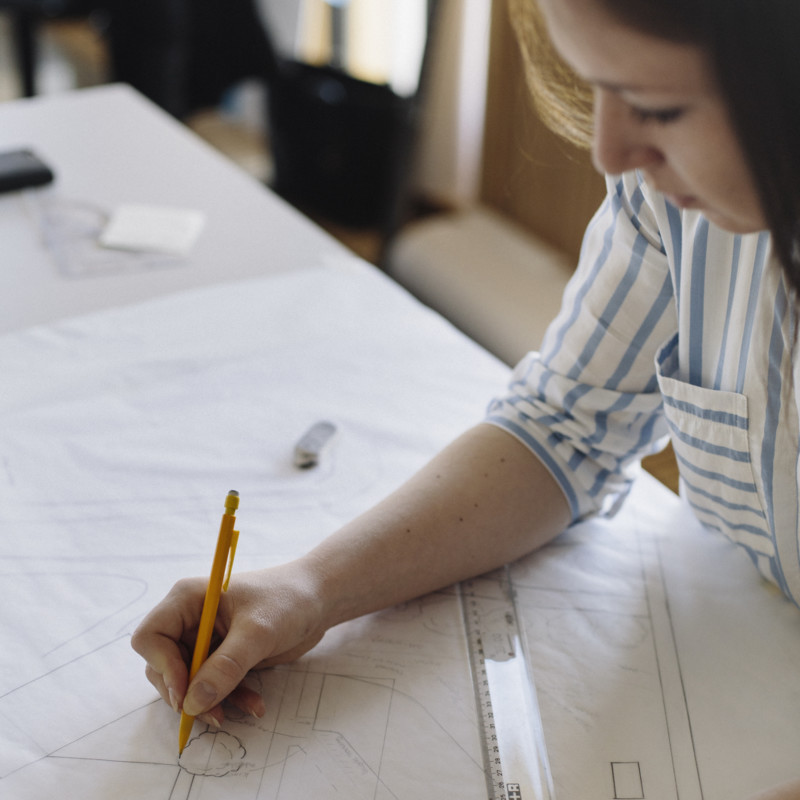 Sandra Kärnstrand sketches in a traditional way with pencil, paper and ruler.

In the open plan office for teachers, it's nice and calm. Only one person is sat at a desk working. It is Carla Collevecchio, course co-ordinator for year two, who is having some well-needed office time.
"Recently, I've been with my students all the time, having briefs, tutorials or group conversations. I only spend roughly one day per week here."
For nearly ten years, she has worked simultaneously as an architect and as a teacher at the Central University of Venezuela.
But she has now lived in Umeå together with her husband for nearly a year and a half.
"It's a much smaller school, so it's nice to be able to contribute in a meaningful way I'm pleased about contributing to the entirety in a more evident way."

I ask Sara Thor one final question before I leave the building: What is it that makes me find Umeå School of Architecture as such a harmonious and safe place?
"We work very closely with students and want them to feel comfortable enough to approach us. The building helps as well as it's very open," she says.
"From year one, a lot revolves around how students experience their own space at school. We're not here to judge or criticise, but to help; like a team that builds together," says Sara Thor. 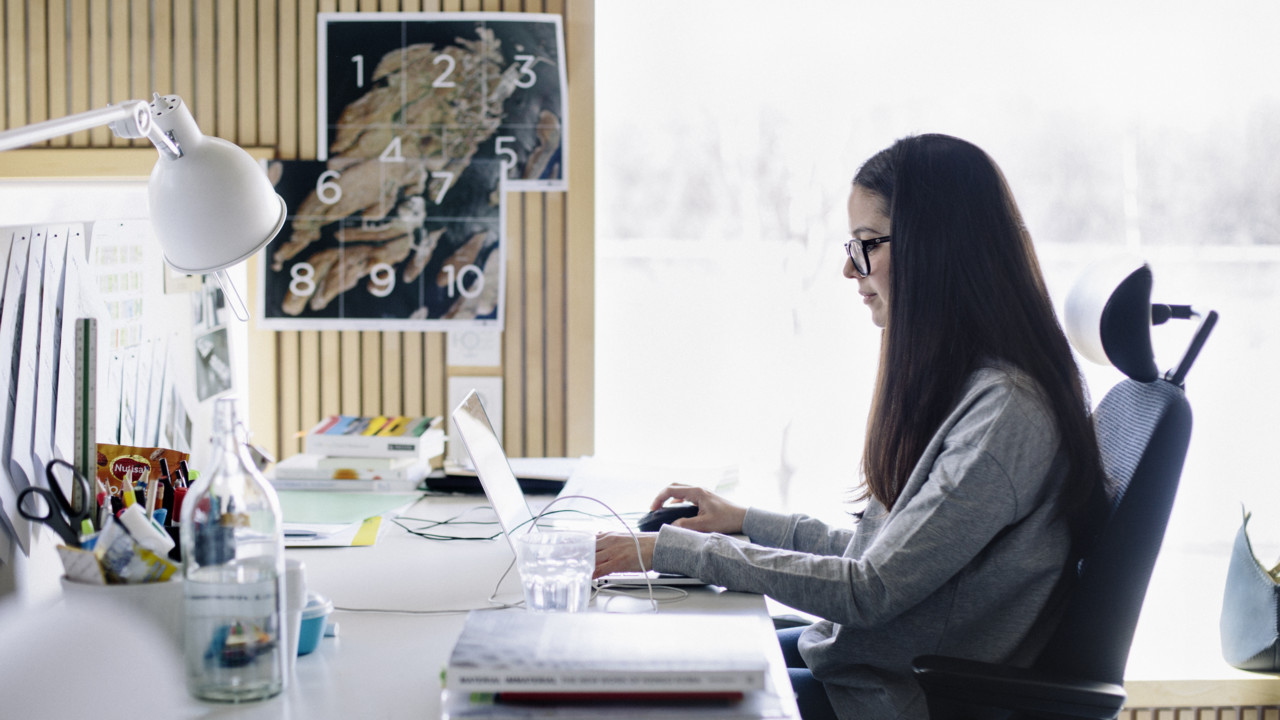 On the wall next to Carla Collevecchio’s workplace, an aerial photograph of the Norwegian island Traena is posted, which is the scene for the year two students’ major, joint project.