Always expect the unexpected – from Erasmus to doctoral studies

The Erasmus exchange year was just going to be an adventure abroad and time to think about his future. But Demian Hauptmann from Germany liked Umeå University and the chance to spend time in Abisko so much that he came back for his Master’s and now continues as a doctoral student. 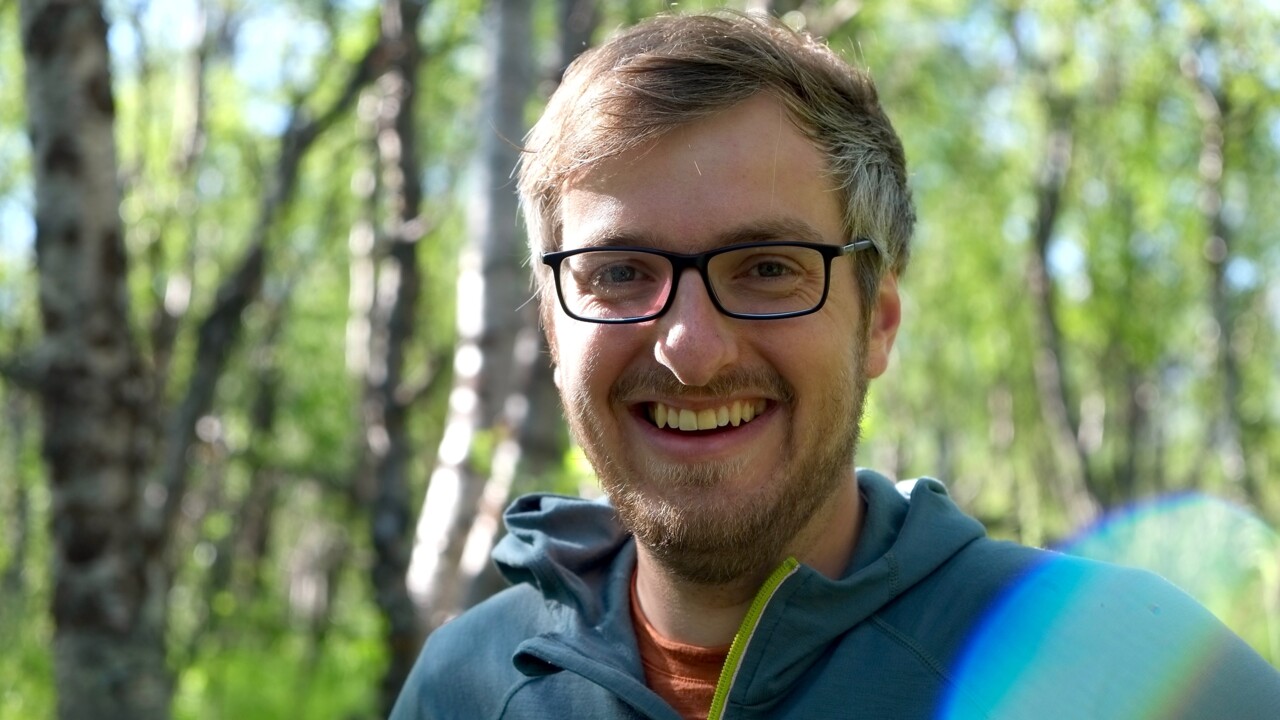 Demian Hauptmann came to Umeå University as an Erasmus exchange student, but later returned to study for his Master’s degree. He will also get his doctoral education at Umeå University.

”It was a chain of incidences that led me here” he says.

In Germany he was studying to become a teacher in geography and chemistry. While studying he had a part time job, and when that ended Demian Hauptmann realized he had more time on his hands. What to do, take more courses in Germany or maybe go somewhere else?

Through the Erasmus programme he saw the possibility to do something different and have a new experience. During the year in Umeå he also re-evaluated his study plans.

”I’m still convinced I would be a good teacher. I have had good experiences when I have been out in classes, but I didn’t feel I had the connection to chemistry I would need to teach it. With geography I could always say why I think it’s an important subject, but with chemistry I didn’t have the same feeling.”

Demian went back to Germany and finished his Bachelor’s degree, but while searching for universities in Germany to study for his Master’s, he realized that the teaching courses he had taken wouldn’t qualify him. 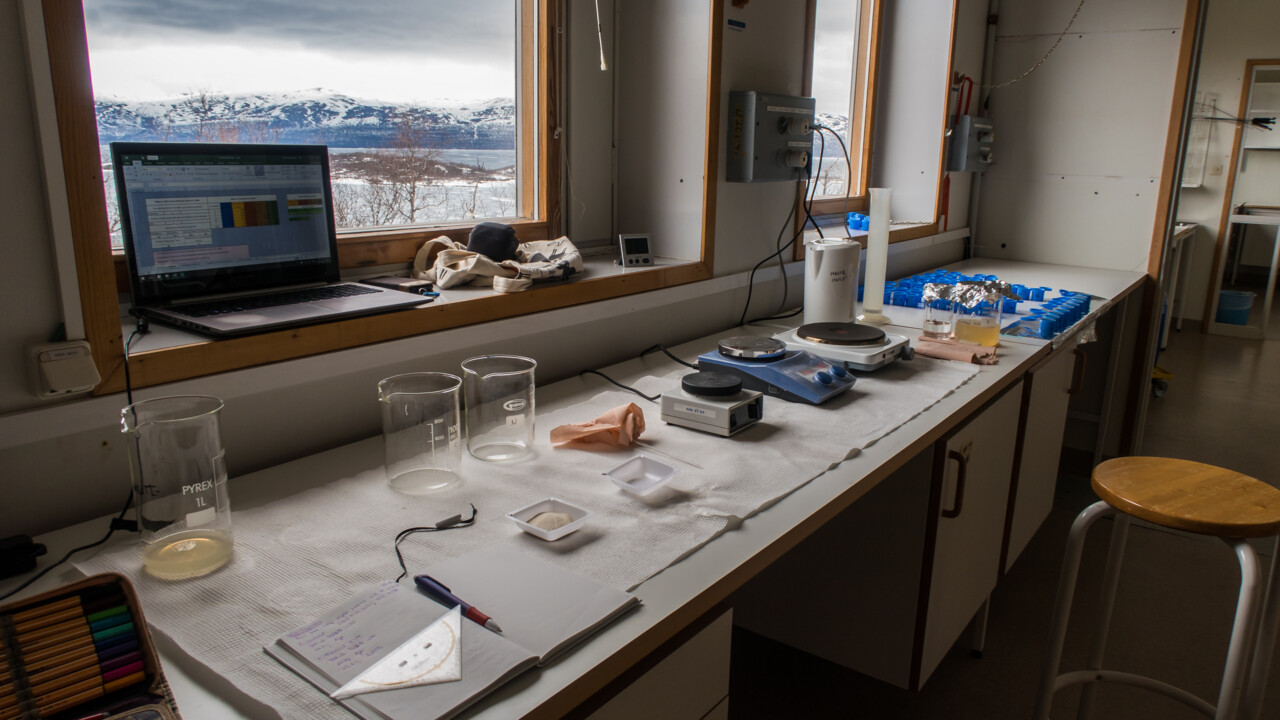 The chemistry lab at the researchstation in Abisko has a stunning view of Torne träsk.

”I would have been admitted conditionally and have had to take a lot of extra basic courses the first year. So I thought, why not apply for the Master’s programme in Umeå, because there I knew I could count all my courses.”

Back in Umeå he also took the opportunity to return to the research station in Abisko, where he had taken courses during his Erasmus year. In Abisko he also did his Master’s thesis work, in a project run by Ryan Sponseller. In the project Demian studied what resources, such as light and nutrients control stream biofilm growth throughout the year. The biofilms are aggregates of algae, bacteria and fungi that colonize the stream bottom and form the base of the food web. 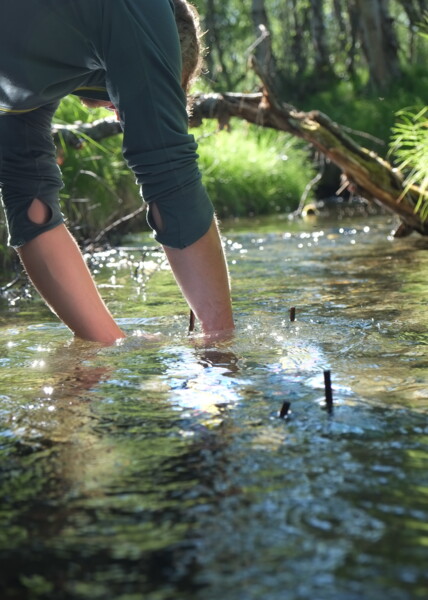 Streams in Abisko has been Demian Hauptmann’s study subject, both as a Master’s student and now as a field assistant. He takes samples of bugs from the bottom, as well as algae, detritus and the water itself.

”It was great to be in Abisko. When I got there in March there were few people. Then more start to drop in, you get to know people at the station and how to use the facilities. Because there was chemistry involved in the project I was always in the lab where you have two windows facing Torne träsk. I listened to music while I worked and could look out to that wonderful view.”

Being in Abisko also meant great opportunities to go out skiing or hiking with others. It was easy to find new friends, both in Abisko and Umeå. Demian Hauptmann also describes studying in Sweden as more student friendly compared to Germany.

”In Germany you would have 5-8 different courses that run through the term and exams in the end. It’s super stressful and you still don’t learn a lot, you just learn for this one occasion” he says. ”Here I really learn something. You take one course at a time and lectures have more of a seminar structure because there are fewer people.”

Demian also appreciated that the study environment is less formal than in Germany, where he would have to use titles and last names when talking to or writing emails to his teachers.

”Here you don’t have that distance between teacher and student and they encourage you to think more and tell your thoughts.”

Following his Master’s degree Demian Hauptmann has stayed on as a field assistant. He works in the same stream, scraping the bottom for insect larvae to identify and analyse in the lab.

Land use in focus

In the autumn of 2019 he will begin his doctoral studies. In his PhD project he will study green house gas emissions from streams in boreal forests. 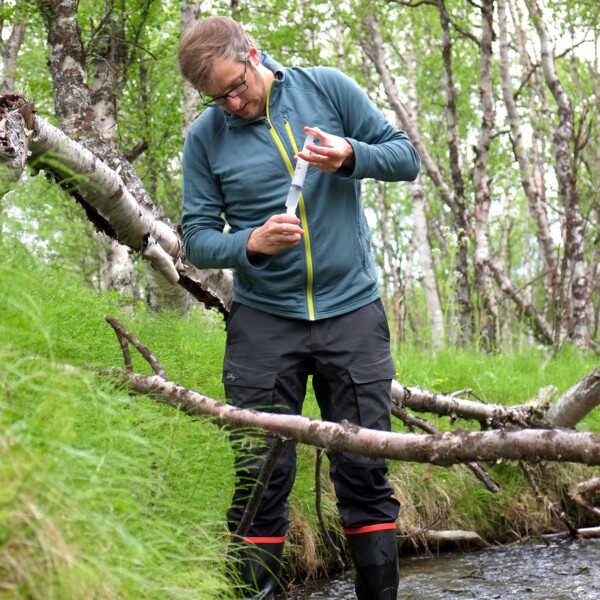 Demian Hauptmann taking samples in a stream in Abisko. Following his Master’s degree he got a job as a field assistant and will later continue as a doctoral student.

”The context is land use and the research is done in collaboration with a forestry company and SLU” he says. ”We want to see how tree harvesting affects in-stream processes and subsequently greenhouse gas emissions. For that purpose, the study will be conducted one year before the harvest and continued for two more years to see what kind of influence the land use has on the stream draining the harvested area.”

What would you say to someone thinking about doing their Master’s in Umeå? Why should they come here?
”If they have a basic interest in nature and being outdoors, especially when thinking about  the possibility to go to Abisko. There are always people going out bird watching or hiking” he says. ”For the programme itself, there are lots of good teachers and researchers, so you learn things from the very source, basically.”