Aiming to outsmart the TBE virus

FEATURE There are probably not many people who like viruses. Anna Överby Wernstedt, at the Department of Clinical Microbiology, Umeå University, might be counted among those belonging to that group. She has successfully accepted the challenge of describing how the tick-borne encephalitis virus (TBE) spreads.

Anna Överby Wernstedt has been doing research on TBE for several years now with the purpose of finding methods to stop the virus before it is too late and spreads. It was more or less a coincidence that it was actually the TBE virus that Anna was going to pursue as a researcher.

“I was in the civil engineering programme, and studied technological biology in Umeå. I went to Glasgow on an Erasmus exchange and studied virology there for one year. That education was not available here,” says Anna.

A bit of a coincidence that it became TBE

Anna comes from Älvsbyn in Norrbotten County, but when she and her brother moved away from home, their parents also moved -  approximately 60 km to Piteå. After her studies in Umeå, Anna decided to pursue a PhD and began her work at Karolinska Institute in Stockholm. Thereafter, she spent a year and a half in Galveston, USA, and three months in Winnipeg, Canada, before returning to Karolinska. She did her postdoctoral fellowship for three years in Germany. She had found her path and knew she was on the right track.

“I’ve worked with TBE from the time I moved to Germany.  It was a dramatic difference compared to what I worked on as a doctoral student. It was a bit of a coincidence that it became TBE, but at the same time it’s an area that is very relevant in Sweden.”

After Anna received a group leader position at the Laboratory for Molecular Infection Medicine Sweden (MIMS), she returned to Umeå.

Such conditions for research are found nowhere else

“My husband is from Stockholm, so the plan was that we should go there. But the opportunities are so favourable in Umeå. Yes, such conditions for research are found nowhere else, so I really wanted to come here.

Since 2001, Anna has resided and worked in Umeå. In fact, a huge smile appears on her face when she talks about her job.

“I have fabulous research colleagues,” she says. “I have supervised four PhD students to successful completion of their thesis, and there are seven postdocs. We are nine in the research group at the present time.”

The discovery of viperin was very import

Nearly all of Anna Överby Wernstedt's projects are about TBE. One of them deals with viperin, which is a multifunctional protein that is very active in the defence against TBE. 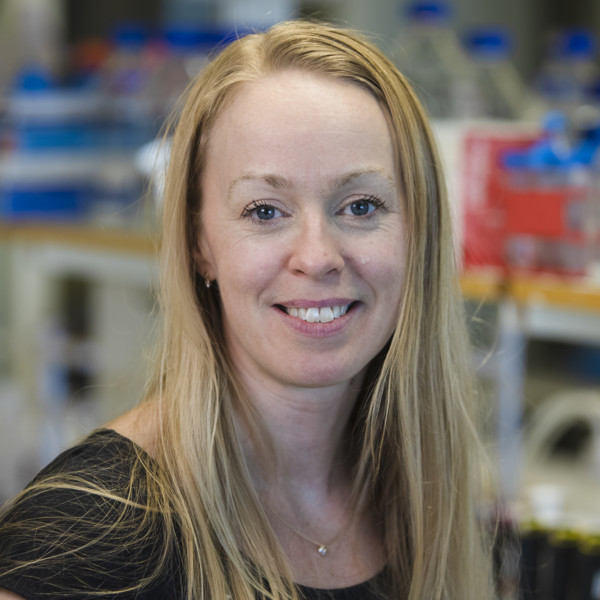 One of Anna Överby Wernstedt's projects deals with viperin, a multifunctional protein that is active in the defence against TBE.

“The discovery of viperin was very important,” Anna says.

As a scientist, she also needs to spend time searching for grant funding.

The competition is fierce, but Anna and her colleagues recently received a substantial grant of SEK 25.2 million from the Swedish Research Council, for the project titled Multimodal imaging and proteomics to study flavivirus replication and molecular disease mechanisms.

I have the best job in the world

Anna becomes a little emotional when she thinks about it.

“I have the best job in the world, but of course it is not just me, but rather my research group that gets the funding. I would never have dared to believe that ‘little me’ would get this large gran, but they believe in my ideas and the ‘dream team’ that I have assembled. I will now be able to hire another researcher. And I will continue to apply for grants and stipends. The projects are intertwined.”

When the funding comes in, there is obviously a bright spark in the work routines.

“All experiments take time and when you get results, they must be repeated again. At the lab meetings every Thursday we go through what we have come up with. It’s fun to see results and it is beneficial if we can get a clear and precise conclusion - whether it was the result we were hoping for or not.”

Collaboration with other researchers

“We're rather open. If you need something, you can send a doctoral student to a laboratory for a month.”

Openness to the public is also important and, in the case of TBE, there are many residents of Umeå and Västerbotten who would like to know how research on it is progressing. The final Fika efter en forskare science outreach event of the spring featured a lecture by Anna Överby Wernstedt, who talked  about ticks and TBE research.

“TBE is spread by ticks, but also by unpasteurized milk such as in goat cheese,” says Anna. “In a Forma government research council-financed project, we collaborate with a group in Örebro, where we analysed sheep's milk. We point out that the trend in Sweden and Europe, where dairy farms use unpasteurized milk, is not appropriate.

“I see a bright future. We have a good team and positive continuity. I've always wanted to be free and creative, and come up with my own ideas. Now I feel like I have a good overview of what is in the works.”

It may seem that Anna Överby Wernstedt is always thinking about work. But that is not accurate. At work, she has her eye on the ball, but you could say that she swims against the tide with her special pastime.

”I train in underwater rugby and I'll be at the World Championships in Austria this summer!”

Anna turned 40 years ago not too long ago. Here are other milestones in her life (those she has accomplished and others she hopes to achieve):