FEATURE 31-year-old Hassan Baqer was one of the first doctors of medicine educated outside the EU and EEA to pass a new Swedish proficiency test for medical doctors. He has now started his practical service at the Gullviksborg Health Care Centre in Malmö. “When I’m done. I can apply for my medical licence.”

In 2016, the National Board of Health and Welfare selected Umeå University to design, account for and implement a national programme of proficiency tests for doctors of medicine with training outside of the EU and EEA. The objective of the tests is to, within a reasonable time, safely assess and license doctors with foreign degrees in order for more doctors of medicine to join the Swedish medical profession.

"When I passed the proficiency test, I was soon able to find a placement. I got lucky on the first interview, and will be working here for six months. Then I'll be able to apply for a medical licence through the National Board of Health and Welfare," says Hassan Baqer, who grew up in Sweden and hence has what he calls 'the advantage of speaking Swedish'.

Hassan Baqer took his medical degree in the US at Ross University in Florida. During his medical education, he underwent clinical training at hospitals in Florida, New York, Michigan and Illinois. 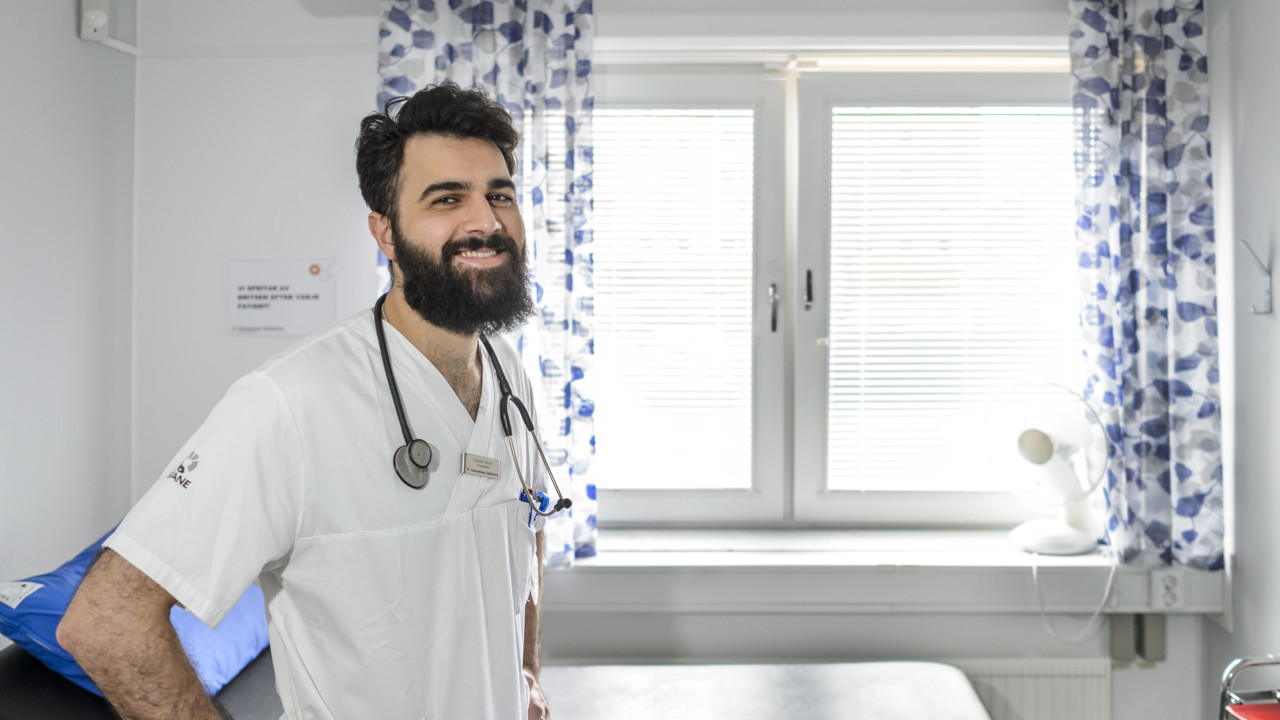 Hassan Baqer took his medical degree in the US, at Ross University in Florida.

In 2016, when Hassan Baqer moved back to Sweden, he found out that Umeå University was going to offer proficiency tests that same year to replace TULE – a validation test that had previously been offered by Karolinska Institutet. Contrary to the TULE test, the new test validates knowledge in doctors of medicine who have already gone through a foundation programme. That means that the new test sets higher demands on qualifications, at the same time as it offers a faster route into work.

According to Hassan Baqer, the proficiency test is well set out. Together with other people who have already completed or are planning on taking the test, he is now a part of a Facebook group in which doctors support each other in providing advice. In the group, he often emphasises how important it is for doctors of medicine with a foreign background to be proficient in Swedish when they take the tests.

You don't need to be on a native level, but it's so important that I really recom-mend people to take a 3–4 month intensive course in Swedish first. I also often say that optimism and patience is important.

Hassan Baqer can relate somewhat to the criticism some people have directed at the proficiency test, suggesting that the theoretical part was too hard. Since some people have long experience as specialists, it can be difficult to remember what they once learnt in the basic courses.

"It's really good that this fast track has been set up, and it's nice to see so many people moving forward. I'm pleased to hear when someone passes one of the sub tests, because I know myself how good it felt!"

The proficiency test – given four times per year – is split into two parts to test theoretical and practical proficiency.

Those who pass both tests must then take a course on the Swedish constitution, show proof of approved Swedish proficiency, and undergo practical service before they can apply for a medical licence from the National Board of Health and Welfare.

Applicants have three attempts to pass the theoretical part and two for the practical part.

So far, 51 people have been approved on the theoretical test and 15 on the practical test.

Umeå – a part of the Arctic

What is the Arctic? Opinions differ. But Västerbotten counts as the Swedish Arctic.