On 4 February 2020, Ellinor Ädelroth was at the Royal Palace in Stockholm to receive The King's Medal, 8th size with the ribbon of the Order of the Seraphim, from King Carl XVI Gustaf. The motivation was for her significant humanitarian contributions.

"I am very, very happy and honoured by this," says Ellinor Ädelroth, professor emerita at the Department of Public Health and Clinical Medicine at Umeå University as she is reached by phone from Rwanda on her way to the Democratic Republic of Congo (DR Congo).

The Stockholm stay was only a temporary visit to Sweden. 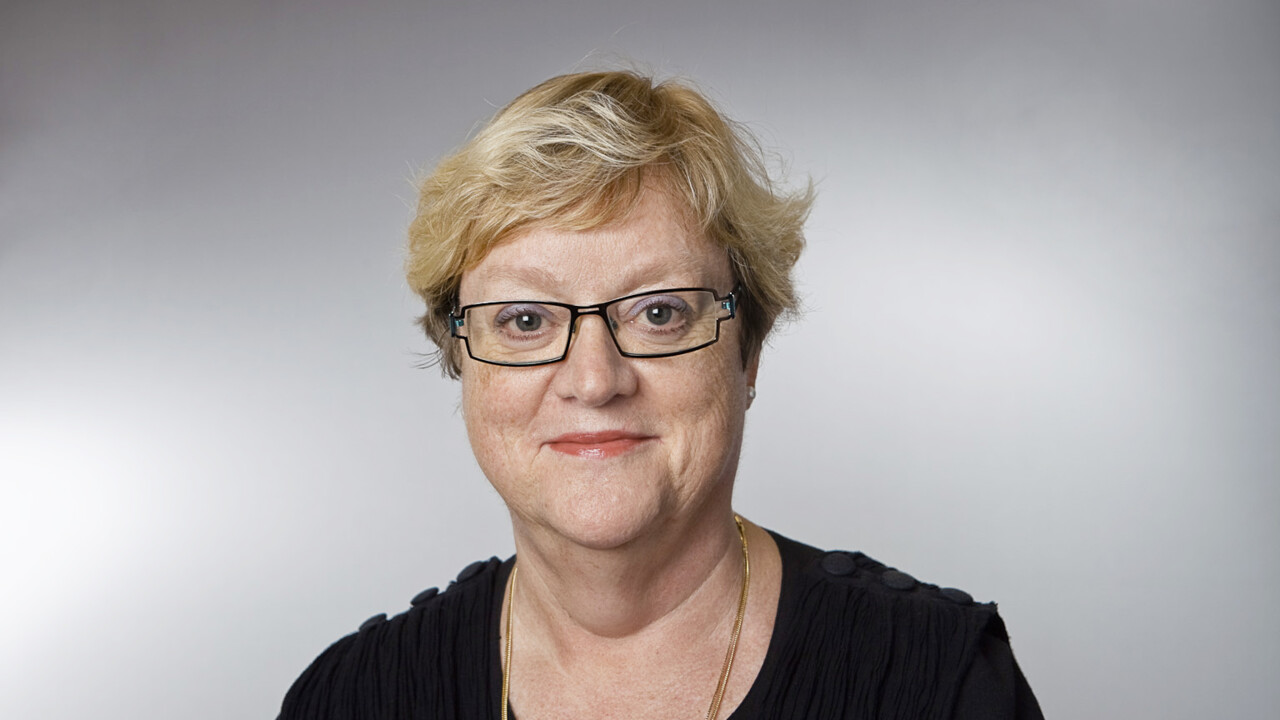 In 2008, Ellinor Ädelroth was installed as professor at the Department of Public Health and Clinical Medicine.

In 2008, Ellinor Ädelroth made a trip to Bukavu in eastern DR Congo together with the Pentecostal church in Umeå. She was then professor of pulmonary medicine, chief physician and head of the Department of Public Health and Medicine at Umeå University. In other words, she was a woman with a lot on her plate. Nevertheless, she went to one of the city's universities, Université Evengelique en Afrique, and offered to start teaching medical students. And that’s the way things turned out. Every summer thereafter, she was in the DR Congo and held courses. 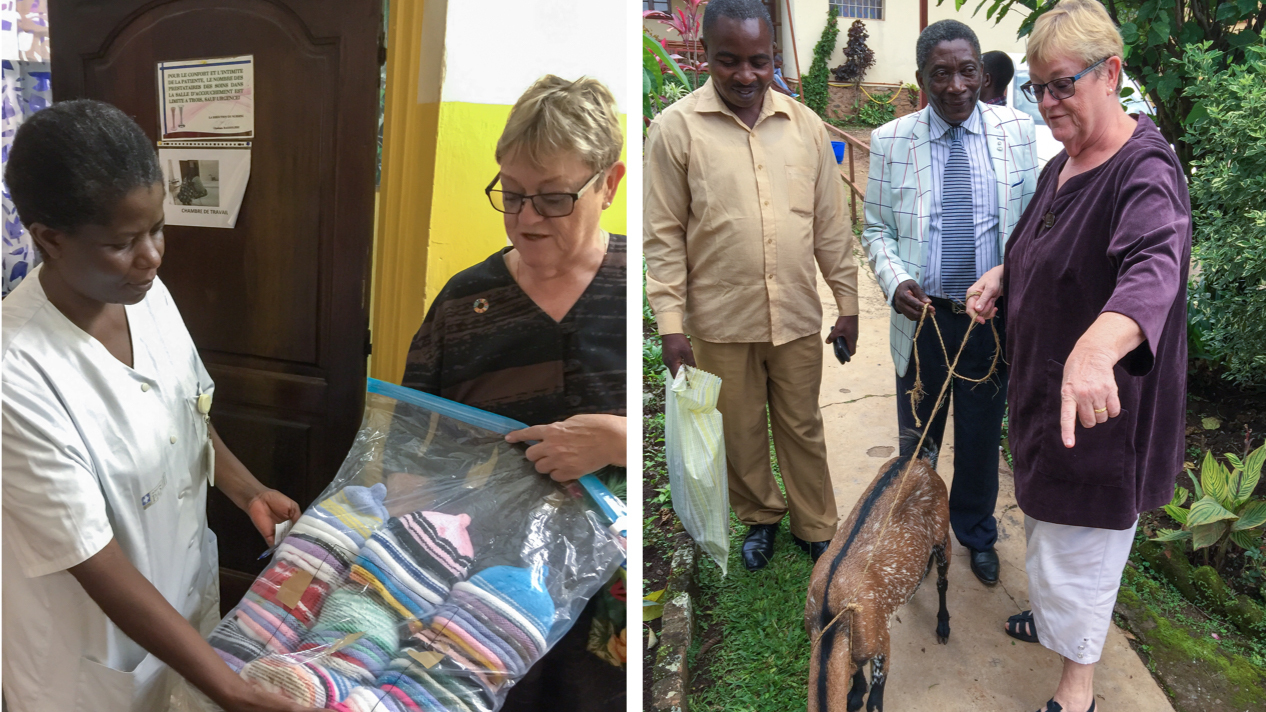 Photo collage with Ellinor Ädelroth on visit in the DR Congo. To the left: maternity ward at the Panzi Hospital when she distributes baby caps that the staff hands out to newborns. To the right: when visiting a hospital far from Bukavu when she received a gift in the form of a live goat.

When she retired in 2012, she moved down to Bukavu to work full-time with both teaching and health care, and eventually became a temporary project manager for the special unit at Panzi Hospital treating women and girls, survivors of sexual violence. Since then, she has basically commuted between the DR Congo and Sweden in every year and helped with so many things side by side with Denis Mukwege, 2018 Nobel Peace Prize winner as well as honorary doctor at Umeå University.

"The award is a recognition of the volunteer work that I have done in Congo," says Ellinor Ädelroth. 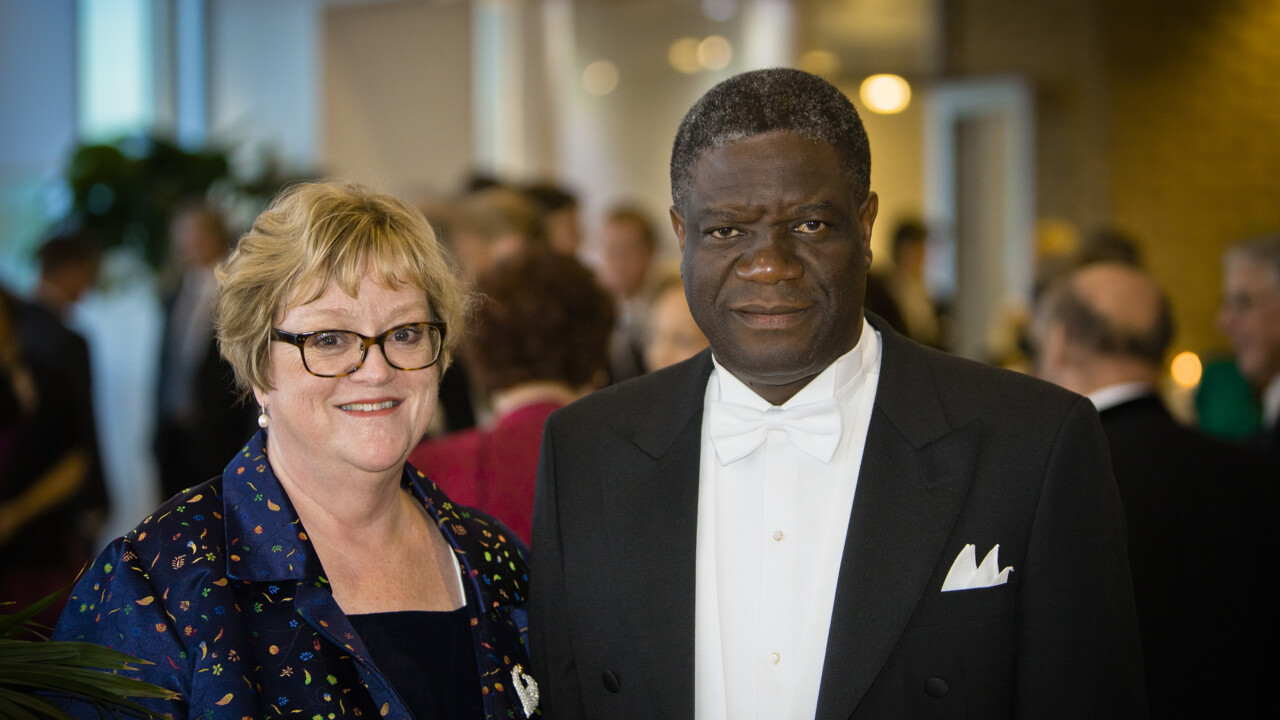 Denis Mukwege, 2010 honorary doctor at the Faculty of Medicine, medical direcor of the Panzi Hospital in Bukavu, Democratic Republic of Congo. Here together with Ellinor Ädelroth at the Annual Celebration academic ceremony in 2010.

Doctor Denis Mukwege is a medical director and gynecologist, and was awarded the Nobel Peace Prize for his efforts to end the use of sexual violence as a weapon of war and armed conflict. In total, more than 50,000 women and children who have been subjected to sexual violence have been treated at Panzi Hospital.

Ellinor Ädelroth was by his side when the Nobel Prize was announced. "There was so much joy, commotion and cheer," she says.

Shed light on the problems

The Nobel Prize has meant that Denis Mukwege has been given new arenas to shed light on major problems that exist in the DR Congo - such as immunity in terms of violence against women, ‘conflict minerals’ that are the basis of many of the problems, and militia groups that protect mines and enact violence against women and children.

What one had hoped was that people would listen to him

Large organisations have also shown interest in collaborating with the Panzi Hospital and financial contributions have increased. And the hospital has been visited by delegations of people who want to know more about the work being done there, and it has become a model for similar specialized units in other parts of the world.

Mukwege was favoured to receive the Nobel Prize several times prior to winning. When he won, was it like you had imagined?
What one had hoped was that people would listen to him and accept what he wanted to say and that the survivors would receive compensation and rehabilitation. That part has been fulfilled after the Nobel Prize.

Crime is increasing and there has been more conflict of late.

What is the current status in Bukavu?
Crime is increasing and there has been more conflict of late. People are poor, and many have moved in from the countryside because it is so uncertain with all the hundreds of militia groups that still remain in eastern DR Congo. There are very many children who are malnourished and there are more and more children in need of care.

Ellinor Ädelroth is 72 years old. Right now, she works more with administrative tasks at the Panzi Hospital. It includes such things as internal auditing on how to document patients, following up on the standards on how to write medical records. and investigating costs for the staff's free healthcare.

How long will you continue to work?
It is beginning to slow down. But when I say that I am old and will not come back anymore, they say that I am so strong (she says with a laugh).

When you retire, will you move to Sweden or stay in the DR Congo?
I will come home to Sweden. It is a bit corrosive at times to be in the DR Congo - the electricity is poor and there is no tap water. There is limited mobility because you do not really know what can happen, as you always need to check if there are hordes of military, or police or street boys. There is theft and fires, and the police are not to trust either, as they are often involved in such things.

What has the volunteer involvement at the Panzi Hospital meant to you?
I am a Christian and have a deep fundamental belief that this is something I should do. It means a lot to me, and I feel like I have had a duty here.

When Ellinor Ädelroth is reached by phone, she waits for her niece who is visiting from Sweden. Together they will celebrate International Women's Day on 8 March, which is an important day in the DR Congo.

"There are a lot more activities here than in Sweden and you better be sure that they will be on International Women's Day, otherwise people will think it is terribly strange," says Ellinor.

With the right to make a difference

For his efforts to end the use of sexual violence as a weapon of war and armed conflict.

The Department of Public Health and Clinical Medicine was formed in 1999 and consists of the following divisio...