Scientists worry about the future of the Baltic

FEATURE Researchers worry about the results from the research programme EcoChange, which show that climate change will have negative effects on the Baltic Sea environment. It is most important that authorities take part in these results and adapt monitoring, planning and management to a changing Baltic Sea.

"It is important to investigate the effects of this on all parts of the marine ecosystem. We also study factors of large concern to people and society, such as concentrations of toxins in our food and fish production." says Agneta Andersson, professor in marine ecology at Umeå University and scientific coordinator of EcoChange. 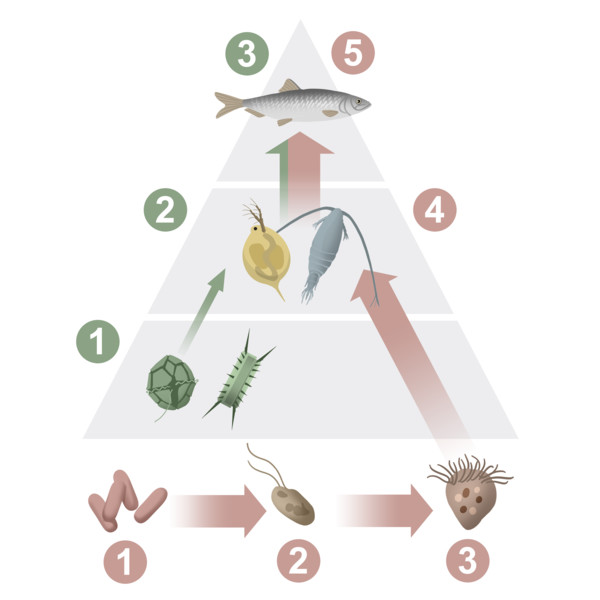 The balance between bacteria and phytoplankton will be disturbed in the Baltic Sea, in favour of bacteria. This leads to a less efficient food web. Illustration: Mattias Pettersson.

The declining food web efficiency is caused by a disturbed balance between bacteria and phytoplankton, at the very base of the food web. Both bacteria and phytoplankton are persistently present in the marine environment. However, climate change leads to changes in the equilibrium, in favour of the bacteria. Compared to phytoplankton production, bacteria production leads to further steps in the food web, with energy losses in each step. The effect will spread through higher levels to fish, and both fish production and concentrations of toxic substances in fish will be affected.

During several years researchers within EcoChange have focused on the dissolved carbon transported by rivers from land to sea. This carbon is expected to increase as an effect of climate change. Johan Wikner and Kevin Vikström, researchers at Umeå University, show results which prove the important role of dissolved carbon in ecosystem productivity and the emergence of oxygen deficiency.

We study factors of large concern to people and society, such as concentrations of toxins in our food and fish production.

"The dissolved carbon has an even larger impact than nitrogen and phosphorus on production and oxygen consumption in some sea areas. It is therefore highly important that the dissolved carbon is included both in coastal zone modelling and in monitoring of the coastal areas in the Baltic", says Johan Wikner.

Li Zhao, PhD student at Umeå University, studies the composition of the organic carbon, and how available different forms are for the bacteria. She investigates how bacteria adapt to changes in dissolved carbon composition. This is important for forecasting effects of the changing carbon inflow to the Baltic Sea. 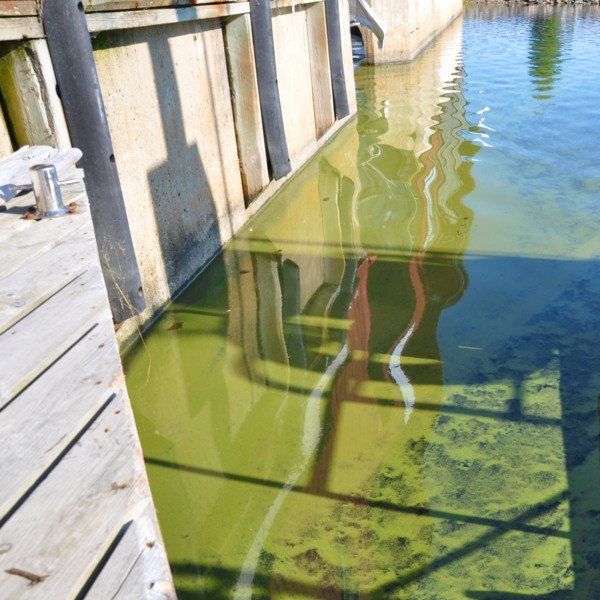 Several researchers within EcoChange study phytoplankton, dinoflagellates and cyanobacteria. Javier Alegria, PhD student at Linnaeus University, focuses his work on picocyanobacteria. These cyanobacteria are unicellular and very small. Cyanobacteria blooms are expected to increase in the future, as an effect of climate change. Javier studies the seasonal variation in these blooms, how they react on changed nutrient conditions, and differences in blooms between the coast and open sea.

The researchers are hoping to be able to tell whether the concentrations of unsaturated fatty acids will change in zooplankton as an effect of climate change, and what the consequences of this might be on the higher levels of the food web. Will the fish become less fat? Will the fish production be affected? This is a new research area, so we will have to wait for some years for the answers.

Several animal groups, such as birds and fish, have displayed symptoms of thiamine deficiency, and many scientists consider this as a serious problem in the Baltic Sea ecosystem. Thiamine, also named vitamin B1, is produced by bacteria and phytoplankton and transferred to higher levels in the food web. EcoChange researchers are working with the thiamine deficiency problem, with the aim to understand the basis of this disturbance. Clara Pérez Martinez, PhD student at Linnaeus University, studies the seasonal changes in thiamine metabolism. 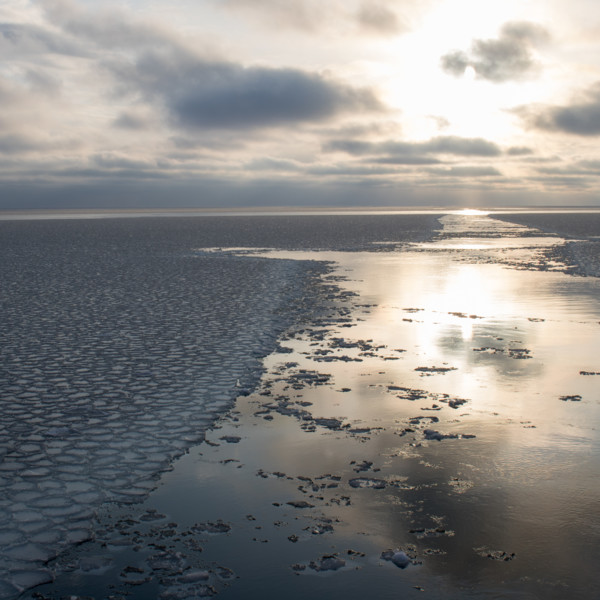 The extent and duration of the ice cover will decrease as an effect of climate change.

Production under the ice

The extent of the ice cover in time and space will definitely be affected by climate change. Jenny Ask and Elina Kari, researchers at Umeå and Stockholm University, study what happens under the ice from several aspects. The results show that the ice cover has a very strong impact on marine life in the water under the ice. The water becomes strongly stratified, a state which can continue even after the ice has melted. Jenny Ask has studied primary production in coastal areas and mountain lakes, and has shown that the primary production occurs very early in the season, far before the ice cover disappears in the spring.

Per Larsson's research group at Linnaeaus University focuses on the fish-level of the food web, mainly pike. The pike populations have decreased in coastal areas, primarily as an effect of the loss of wetlands adequate for pike reproduction. Therefore, work is being done to improve the conditions by restoring wetlands. Kristofer Bergström, PhD student in Per Larsson's group, has evaluated the restored wetlands, and found that these so called pike factories really increases the pike production.

The coastal-living pikes in the Baltic Sea have a homing behaviour, which means that they return to their natal site to spawn. Thereby genetic barriers develop, which gives researchers great opportunities to study the different population's ability to adapt to various environments. The ability to adapt to new conditions might become crucial in surviving in the future Baltic Sea, and the pike is a good example of this.

Our research clearly shows that climate change will affect the Baltic Sea negatively. This worries us.

"You must never think that we can figure out today how the ecosystem will function in a hundred years if we don't take adaption into consideration. Adaption appears on all levels of the food web, but the phenomenon is often overlooked within both research and management" says Per.

Mercury in the food web

The fact that the food web will change in its basal levels will also have an impact on the contaminants in the ecosystem. EcoChange researchers are working on understanding how methylmercury is taken up into the food web, and how it thereafter is transported to higher levels. Erik Björn, lecturer at Umeå University, has shown that the changes in the balance between bacteria and phytoplankton also has an impact on the uptake of methylmercury. The transformation of inorganic mercury to the toxic and bioavailable organic methylmercury is performed by bacteria. These bacteria are expected to increase in the future. Anne Sörensen, researcher at Stockholm University, is developing models for mercury's way through the food web.

"The most important process is the uptake from water to cyanobacteria and phytoplankton. Species composition in this part of the food web determines how large amounts of methylmercury that will enter into the food web" she says.

Most toxins are produced by humans, and are not naturally present in the environment. However, there are also naturally produced brominated compounds in the ecosystem, produced mainly by bacteria, phytoplankton and macroalgae. These are complicated chemical compounds, and knowledge about them is limited. Climate change will probably increase the production of them, and question arises as to whether this might explain some toxic effects that so far have remained unexplained. 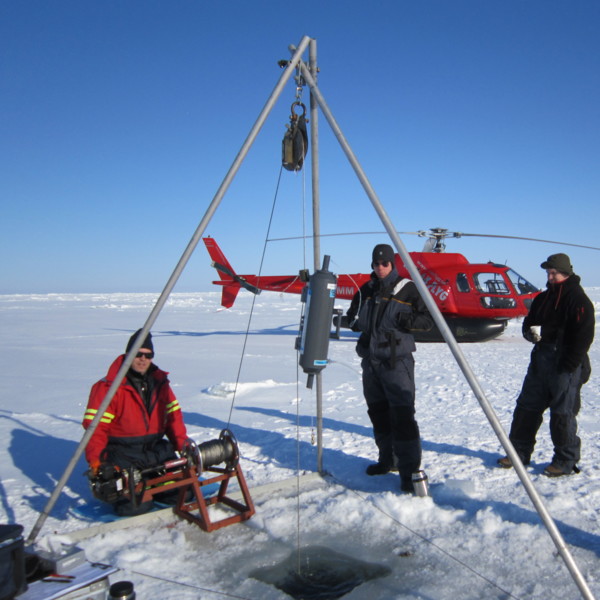 Winter sampling of water in the Bothnian Bay. Environmental monitoring is costly, and it is important to measure the right variables.

An important part of the EcoChange research programme is the close connection to the authorities. One of the goals for EcoChange is to summarize results into substantial advice for the Baltic Sea management. From the very start, sea management administration has played an important role in the programme, and the cooperation has developed through the years. Representatives from different authorities have pointed out important questions to address, knowledge gaps and which parts of the administration that have the largest needs for support from research.

It is important to quantify and give practical form to the results produced within EcoChange. How large is the problem with increasing dissolved carbon entering the Baltic? What will costs be to society of increasing contaminant concentrations in fish? It is also important to understand the differences within the Baltic, and to involve knowledge of the filtering function of coastal areas into sea area management in the Baltic.

The question of what to measure in monitoring is eternally present. To choose the parameters in the monitoring programmes takes looking into the future. In this work, EcoChange research can be highly valuable.

"We constantly try to improve the environmental monitoring programmes, and we are under high pressure to fulfil international commitments. Therefore, we must work effectively and measure the right parameters. We have valuable help from EcoChange in this work" says Elisabeth Sahlsten, senior analyst at the Swedish Agency for Marine and Water Management and member of the EcoChange reference group.

Agneta Andersson emphasises the importance of a good communication between research and authorities.

"Within EcoChange we have produced results which clearly show that climate change will have negative effects on the Baltic Sea environment. This worries us. It is most important that authorities take part in our results and adapt monitoring, planning and management to a changing Baltic Sea." she says.

The text is a summary of the EcoChange conference which was held in October 2018.