NEWS On the fifth of December TripleED arranged and hosted a panel discussion on the topic of reasoning in extreme environments and how lessons learned in the Death Zone of the world’s highest peaks may be applied to sea level – judgment. 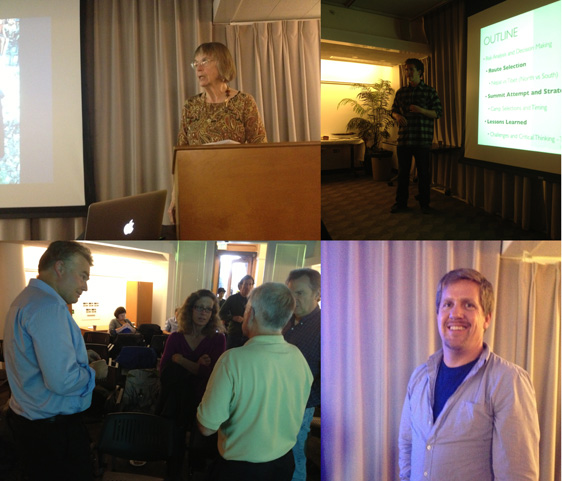 Effective decision-making and risk assessment are critical survival skills in high-altitude mountaineering, even as its ethos is challenged by commercialization. Mountaineering was once the realm of exploration, now it is largely a business venture where the demands of sponsors can control the outcome of a climb nearly as much as the weather. But there remain climbers who are trailblazers, demonstrating courage and sound judgment in spite of the challenges. The panelists were Bill Burke, who at age 70 was the oldest American to summit Everest; Jordan Romero, who at age 13 became the youngest person to summit Mount Everest together with his father Paul Romero; Chris Klinke, mountaineer and expedition leader that witnessed the events on K2 in 2008 in first hand, and in addition to that also is involved in TripleED; Hari Mix, a young aspiring mountaineer that dream about summiting Mount Everest and Lhotse without supplemental oxygen during the same season, and in the meanwhile collecting data for TripleED; and Irene Beardsley, the first woman to summit Annapurna, that together with K2 is one of the deadliest mountains. The panel was hosted by the research team TripleED (www.tripleED.com) and Associate Professor Markus Hällgren from Umeå School of Business and Economics, Umeå University, Sweden, currently a visiting scholar at the department of Sociology at Stanford University.

All in all the room was absolutely full and more than 50 people from all kinds of backgrounds, including faculty, students and business, enjoyed and took part of the very interesting discussions for three hours.