An efficient path from carbon to renewable fuel production

NEWS Earth-abundant materials based primarily on carbon, nitrogen and transition metal oxides can be combined into highly efficient energy conversion devices. These devices can be used in fuel cells as well as in electrolysis. This is shown experimentally by Tiva Sharifi, physicist at Umeå University, Sweden. She defends her thesis on 31 March. 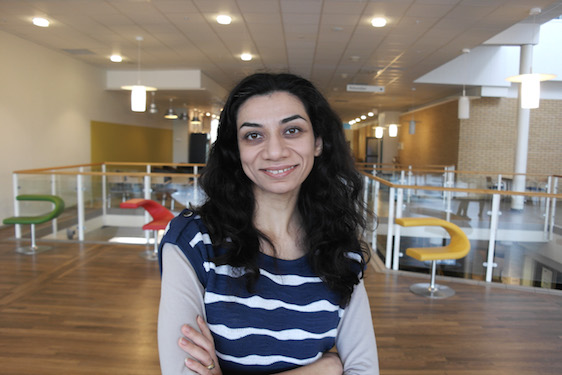 As the world runs short of oil, the hunt for new alternative energy resources is intensified. Hydrogen production – by splitting water to oxygen and hydrogen using sunlight as the driving force – is an interesting approach to fuel production.

Tiva Sharifi’s focus has been to address the problems of energy conversion processes, aiming mainly to fabricate durable electrode materials that allow up-scaling of electrochemical cells.

"I have created an electrocatalyst with outstanding performance and stability for several important energy conversion processes", says Tiva Sharifi.

In such an approach, up-scaling is inhibited and the whole process is limited to laboratory scale. Furthermore, the fabricated electrode is not durable and the catalyst material easily peels off from the conductive substrate during the electrochemical reaction.

Tiva Sharifi has solved these problems by fabricating electrode materials in such a way that these two steps – electrocatalyst synthesis and loading onto a conductive material – are combined. She grew electrocatalyst material directly on the surface of a current collector in a bottom-up self-assembly process. An inexpensive conductive substrate made of carbon paper was chosen as current collector. It has an acceptable conductivity and the capability of easy handling and up-scaling. Instead of using scarce and hence expensive noble metals – like platinum and ruthenium – as catalyst materials she chose all organic carbon materials, transition metal oxides – such as cobalt oxide and iron oxide – or their combination.

Tiva Sharifi also investigated nitrogen-doped carbon nanotubes (NCNT’s) as an electrocatalyst, since their properties are interesting when it comes to manufacturing all organic metal-free catalysts. She discovered that NCNT’s – grown directly on the current collector – is a highly efficient electrocatalyst.

The NCNT’s exhibit strong electrocatalytic activity for some fundamental energy conversion reactions, such as oxygen reduction reaction in fuel cells. They are formed by introducing nitrogen in the pure hexagonal carbon structure of carbon nanotubes. Interestingly, it is possible to keep track of nitrogen in the carbon framework, and depending on where the nitrogen replaces carbon in the structure, the nanotubes behave catalytically different. In her thesis, Tiva Sharifi shows that it is possible to transfer nitrogen from non-favourable sites to catalytically active sites in already synthesised NCNT’s.

The thesis is published digitally

The dissertation defence will take place in room N420, the Natural Sciences Building, at 13:00.

Tiva Sharifi comes from Iran. She has been studying at the Department of Physics, Umeå University, since 2009.