NEWS In North America, the spread of European earthworms is a known environmental issue as it has turned out that some of these species are capable of altering entire forest ecosystems. In Sweden, we have so far had a positive approach to earthworms and no policies have been put in place to limit the spread of these worms in Swedish national parks. A new study from Umeå University in North Sweden now shows that the Swedish approach may need revision. 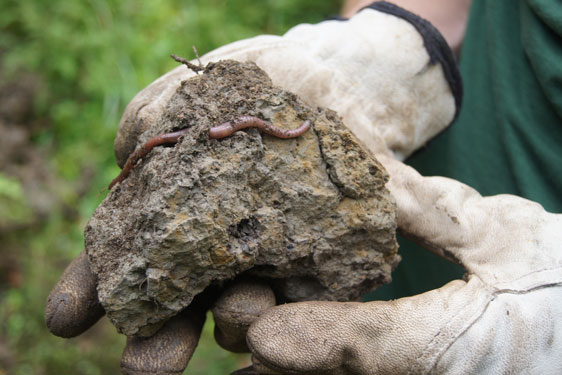 The earthworm is a new species in the Swedish mountains.Photo: Kyungsoo Yoo

“We were rather surprised to see how well some of the earthworm species causing most ecological damage in the USA, survive in the Swedish mountains,” says Jonatan Klaminder, associate professor at the Department of Ecology and Environmental Science at Umeå University in Sweden, and leader of the study.

In the 1990s, in countries such as Canada and the USA, it was discovered that the spread of earthworms from farming and gardens changed the vegetation in American forests with negative effects on certain trees and deer stock. That led to the current strict guidelines on how to handle worms and breaches to the guidelines in national parks result in heavy fines.

From a Swedish perspective, this may seem surprising giving that we are taught from an early school age that worms are positive for soil improvement and for the environment. Although, after an inventory of the earthworm stock in the Swedish mountains near the areas of Padjelanta, Stora sjöfallet and Abisko, signs are pointing to the need for a possible revision of this view.

The study shows that many of the species that have changed the North American ecosystems are now spreading from mountain cottages, previous farming properties and research stations into unprotected national parks around the Swedish areas in the study. The high number of earthworms indicates that they are particularly suited for arctic birch forests and mountain meadows.

Humans are counted as the most common spreader of earthworms simply because earthworms spread extremely slowly by themselves. During the Ice Age, all earthworms are thought to have been completely eradicated in great regions across Northern Europe and the USA. Their slow ability to self-spread suggest that recolonising previously ice covered areas are still in progress, and that the Swedish mountains are one of the final areas of Europe to where earthworms have yet not reached.

“Based upon studies from the USA, we can see that earthworm populations are capable of moving 5–10 metres per year, which means that they would never have been able to reach the Swedish mountains after the Ice Age on their own,” says Adrian Wackett, student at the University of Minnesota, USA, and a part of the study.

The big issue for researchers to now figure out is what damage the new types of earthworms are capable of doing to the Swedish mountain ecosystems.

“It’s somewhat too early to highlight this as a considerable environmental issue as we aren’t yet sure of the ecological consequences. Nevertheless, if the earthworms are given the chance to establish, they are virtually impossible to get rid of. If we later realise that they are a problem for our mountain ecosystems, we will regret it,” says Jonatan Klaminder.

The study has been published in the journal Biological Invasions.