NEWS Björn O. Nilsson, biochemist and CEO of the Royal Swedish Academy of Engineering Sciences (IVA), and Professor Gary Suizdak, the Scripps Research Institute in La Jolla, the US, have been appointed 2017 honorary doctors at the Faculty of Science and Technology at Umeå University. 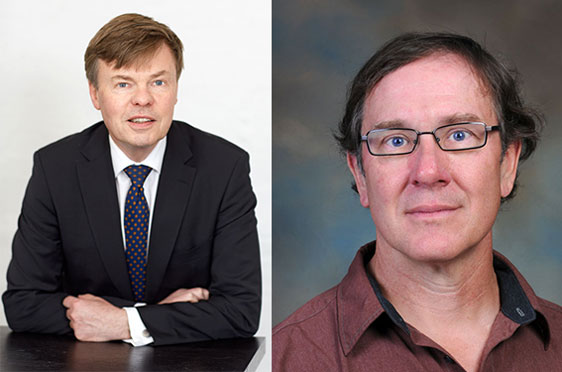 Biochemist Björn O. Nilsson and professor Gary Suizdak have been appointed 2017 honorary doctors at the Faculty.

Björn O. Nilsson has shown a commitment in strengthening the collaboration between the universities, trade and industry, and other parties in society, not least through the IVA visits organised in Umeå and at Umeå University under his lead, and through his work as an external member in the Umeå Institute of Design strategic board from 2013–2016.

Björn O. Nilsson has shown good insights into and well supported visions on how multidisciplinary knowledge – both that of research and professional expertise – is of great importance to future community building activities and economic growth in relation to the academic community. During his career, he has been active in research-related contexts with trade and industry influences in areas spanning across all our faculty – from natural sciences and technology to design. With IVA as a platform, Björn O. Nilsson has made a considerable achievement in bridging these subjects and areas together.

Björn O. Nilsson is a biochemist and business executive, he is CEO of the Royal Swedish Academy of Engineering Sciences (IVA) until summer 2017, and is also member of the ÅF AB board. On top of that, he is chairperson of BioInvent International AB and also chairperson of the Swedish Athletics Association. Björn O. Nilsson took his doctoral degree in biochemistry at the Royal Institute of Technology in Stockholm in 1986. He has published 63 scientific articles and has been approved or applied for eight patents. In 1996, Björn O. Nilsson was appointed member of IVA in the biotechnology department, and has previously worked on a number of leading positions in biotechnology and the pharmaceutical industry. Furthermore, he has been chair of the trade association for the Swedish biotech industry, SwedenBIO.

Professor Gary Siuzdak has been a true pioneer in the mass spectrometry technologies, and has over the last 15 years stood up for mass spectrometry-based metabolomics. On a daily basis, thousands of researchers in over a hundred countries use the software and databases for metabolomics data processing that Gary Diuzdak’s lab have developed and made accessible. These include the well-known XCMS Online informatic platform and the METLIN database.

The Swedish Metabolomics Centre (SMC) has been active since 2013 with support from Umeå University, the Swedish University of Agricultural Sciences, and the Knut and Alice Wallenberg Foundations. Since 2016, SMC is a national node for metabolomics with further support from SciLifeLab. Professor Gary Siuzdak has been a member of the scientific advisory board for SMC since its start, and in 2010 he was invited as keynote speaker at a metabolomics workshop organised by Umeå University.

Professor Gary Siuzdak has constantly brought technology forward to real challenging biological questions at issue. One example is the first demonstration of exactly how ‘soft’ the soft ionization technique ESI is by analysing a whole plant virus using ESI mass spectrometry, catch it and later reinfect a plant with the analysed virus. In later years, his research team has conducted pioneering studies that show a metabolic connection between bacterial biofilms in the gut and colon cancer.

Professor Gary Siuzdak has published over 200 scientific articles as well as books on the subject of mass spectrometry and metabolomics.