NEWS Chemist Erik Chorell at Umeå University has been appointed Gunnar Öquist Fellow by the Kempe Foundations. The award comes with a SEK 3 million research grant and a personal award of SEK 50,000. The internationally renowned researcher Gunnar Öquist, professor emeritus, will also become his mentor. 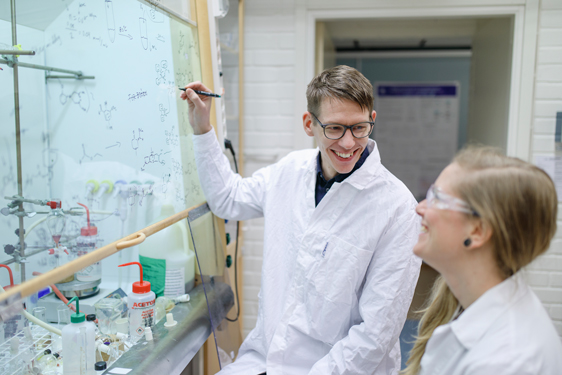 Erik Chorell has three postdocs in his research team, here he is conversing with one of them – Madeleine Livendahl. Photo: Mattias Pettersson

“I feel excited and honoured about being chosen for this prestigious fellowship. It’s particularly valuable that the money is not earmarked. Instead, I have free reigns to let my ideas lose and invest in the projects I believe in. It’s a privileged situation,” says Erik Chorell, researcher at the Department of Chemistry at Umeå University.

The most common DNA structure is the well-known double helix, but DNA can also form other structures such as G-quadruplexes, also known as G4 structures. In his research, Erik Chorell develop compounds that can be used to learn more about these alternative structures. G4 structures have been preserved through the evolution and are very important in a series of cell processes such as gene regulation and protein biosynthesis. They can also be correlated to more serious diseases such as cancer.

In the genetic make-up of humans, there are about 700,000 positions that can potentially form a G4 structure. Which ones that form and their biological functions are largely unknown at present. Erik Chorell is working on identifying and developing molecules that can selectively bind some of these G4 structures and stabilise them.

“By selectively altering certain types of or even individual G4 structures, we can learn more about when they are formed and their vital biological functions. In future, the knowledge may be useful in exploring novel ways of treating cancer or new drugs on bacterial infections as an alternative to antibiotics,” says Erik Chorell.

Many of the projects are interdisciplinary and Erik Chorell has wide-spanning collaborative partners at other departments who together strive to bring this relatively young research field forward. Together with his own team, Erik Chorell works according to three strategies in order to develop the selective chemical substances. The first strategy is based on knowledge on the three-dimensional structure of known G4 structures and chemical substances that bind to all G4 structures without selectivity. In order to progress in this field, three-dimensional simulations are carried out on a computer.

The second strategy is based on a high-throughput screen (HTS) that was performed together with collaborators last year. The HTS tested a library of close to 30,000 substances and identified those that bind to and stabilise G4 structures.

“We have found some interesting molecules with promising selectivity using this method. We are now developing methods to synthesise the molecules in order to modify and improve them further. As an organic chemist, I love the practical nature of working in a lab creating molecules.”

The third strategy is still in a very early phase. In using it, though, Erik Chorell would like to develop chemical substances that selectively bind to individual G4 structures.

“This research is in its infancy. I’ve done some initial trials and have a strong belief in my theories of how to accomplish this. Particularly for this reason, the added contribution comes at the right time and I’ll now be able to start doing test runs.”

Erik Chorell’s projects are young and newly started and the opportunities to let them develop in new directions are hence great.

“Organic chemistry is expensive when it comes to chemicals, materials and analyses of novel substances. The infrastructure available at the Department of Chemistry and at the Chemical Biological Centre (KBC) is very modern and well-functioning, which is highly valuable to me in my current situation.”

Erik Chorell spends some of his time teaching organic chemistry and medicinal chemistry to future chemists and pharmaceutical staff.

“I enjoy teaching, and the encounter with students is both important and rewarding. At the moment, us teachers are restructuring many of our courses. It’s both fun and a challenge to participate in changing and developing the course content.”

In his spare time, Erik Chorell likes to exercise, spend time with the family, experience the Swedish mountains and ski.

Erik Chorell was born in the northern Swedish town of Härnösand in 1980 where he graduated from the natural science programme at upper-secondary school. In 2000, he moved to Umeå to study Chemistry Engineering, which was later complemented with a Master’s Degree in Chemistry. In 2005, Erik Chorell wrote his degree project, which was awarded with the AstraZeneca Prize of Excellence after which he took on doctoral studies with Professor Fredrik Almqvist. When Erik Chorell later publicly defended his doctoral dissertation, it was with the title: Pilicides and Curlicides – Design, synthesis, and evaluation of novel antibacterial agents targeting bacterial virulence. The dissertation was awarded the Natural Scientists Prize for best dissertation in Chemistry in 2010 through the Swedish Royal Academy of Sciences.

His academic career continued with a postdoc at Washington University School of Medicine in St. Louis, the US, where Erik continued to widen his knowledge in Organic Chemistry and Medicinal Chemistry with Microbiology and Biochemistry. The postdoc scholarship that the Swedish Pharmaceutical Society provided gave him the opportunity to return to Umeå University in 2012. Since then, he has held a research position at the Department of Chemistry and has spent a part of his posting to build up his independent research.

This is the fifth consecutive year that researchers have been appointed a Gunnar Öquist Fellowship. Apart from a research grant of SEK 3 million, disposed freely for three years, the awardee is also given an additional SEK 50,000 as a personal prize. Professor Gunnar Öquist, Umeå University’s maybe internationally most renowned researcher, lends his name and his mentorship to the selected awardee. Through his long-term work for the Swedish Royal Academy of Sciences and his wide network of contacts among Nobel Prize laureates, Gunnar Öquist carries valuable experience of pioneering research, which the awardee can benefit from.