NEWS The highly technically advanced laboratory will be primarily used for teaching, research and testing in the area of sports and exercise science. The lab is about 400 square metres in size and is affiliated with the sports medicine unit and Umeå Centre for Sport Science. 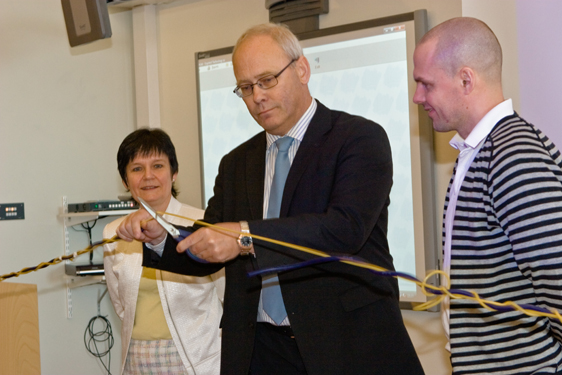 “The new sports science laboratory increases the possibility to test and analyse the things that are of utmost interest for athletes, such as conditioning, strength and speed," says Karin Henriksson-Larsen, professor and head of the sport medicine unit, where teaching, research and testing in the area of sports has been conducted since 1989.

In the sports science laboratory, it will be possible to conduct sophisticated analysis of blood, and muscle and heart function, both at rest and during physical work. Some tests may also be performed outside the laboratory, above all about oxygen uptake and energy in running, skiing and cycling. The lab is located in the premises of IKSU Sport Centre, the largest fitness centre in northern Europe.

Large international interest Interest in the new sports science laboratory is very significant from the Nordic countries, as representatives from leading sport centres in Denmark, Finland and Norway attended the inauguration. In addition, guests from sports medicine units in Italy and England were in attendance. Other prominent guests included Franco Combi, the club doctor of Italy’s Inter football club, and Andrew Willet from London's largest sports medicine clinic and employed by several English Premier League clubs. Umeå-based athletic associations, sportsmen and women also participated, including Umeå-born alpine skiier Maria Pietilä-Holmner.
The official inauguration band was ceremonial cut by Umeå University’s vice-chancellor Göran Sandberg, surrounded by the two people who were most instrumental to the idea of sports lab becoming a reality, Karin Henriksson-Larsen and sports physiologist Michael Svensson. Speeches were given by Sandberg, Henriksson-Larsen, Umeå municipal commissioner Lennart Holmlund and committee of recreational activities vice-chairman Lennart Johansson. The opening ceremony ended with a demonstration of some of the laboratory facilities by some of students of the sport science programme.