NEWS On Friday 17 November, Bildmuseet will open a solo exhibition of the works of artist Do Ho Suh, his first in Scandinavia. The museum’s top floor will be taken up entirely by a large installation of his transparent fabric structures. The exhibition also includes video works and drawings in which the artist explores architecture in various ways as physical and imaginary spaces. 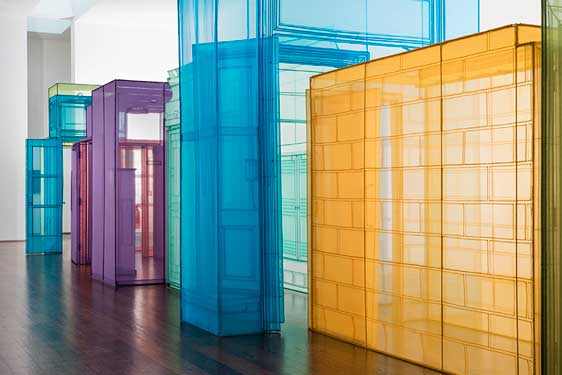 Journalists are welcome to attend the media preview on Thursday 16th November at 10am. On the same occasion, the media will also be given a preview of the exhibition Dada är dada (Dada is dada). Both exhibitions will be opened to the public at the autumn’s big vernissage on Friday night, 17th November.

Artist Do Ho Suh is interested in architecture as physical and mental spaces, in how we organise and experience the space around us and, in doing so, how we attempt to understand the world and ourselves. Inspired by his peripatetic life, Do Ho Suh has worked for a long time with the idea of the home as both a physical space and a lived experience. He reminds us that however far away we move, we always carry our home with us. In our minds, we can always re-create the spaces where we have spent our lives.

In his artworks, Do Ho Suh has carefully documented the architectural spaces where he has lived and worked – his childhood home in South Korea and apartments and studios in New York and London – in order to then meticulously reproduce them in full scale as visually striking, sculptural works of art. In transparent fabric structures, he brings to life experiences of mobility and change, of crossing boundaries and moving between different mental spaces and states.

“I see life as a passageway, with no fixed beginning or destination,” says Do Ho Suh. “We tend to focus on the destination all the time and forget about the in-between spaces. But without these mundane spaces that nobody really pays attention to, these grey areas, one cannot get from point a to point b.”

Upheaval, cultural differences, tactile and imaginary spaces. The artist’s move to London is the starting point for the content and the emotional aspects of his monumental textile installation Passage/s, the central work in the exhibition. Do Ho Suh’s textile installation contains dreamlike portraits of his former homes. They are present but transparent; a kind of elusive recollection of the mind. In this work, he has recreated architectural elements from his new home in London with parts of his former homes in New York and Berlin. The 16-metre-long architectural structure runs diagonally across the entire exhibition hall.

The work Passage/s highlights the spaces in between, those often-overlooked spaces that connect different spatial functions with each other, such as the passageway, the corridor, the hallway and the vestibule. A passage can also be seen and understood metaphorically as movement between different places, cultures, and identities.

Imaginary architecture and memories of homes

In terms of their content, the three video works in the exhibition are closely related to the large installation Passage/s. The first video work has the same title and reproduces a movement through a seemingly endless passage or corridor with constantly shifting interiors. In the two versions of My Home/s, the camera moves vertically and horizontally through a number of rooms, as if they were in the same building. A continuous movement without beginning or end.

The exhibition also includes works on paper. Do Ho Suh’s drawing My Homes - 3 (2012) depics all the homes he has lived in since he was born in 1962 up to and including 2012, from left to right. In this precise, graphite and coloured pencil drawing, the architectural elements are fused into a single entity; one extremely long building which runs like a snake from one side of the three-metre-long paper to the other. The drawing reproduces this imaginary building from three different perspectives: viewed straight from the side, straight from the top and at an angle from the top. The line drawing Entrance, Apartment A, 348 West 22nd Street, New York, NY 10011, USA (2015) was made using textile thread embedded in gelatine on hand-made cotton fibre paper and depicts the entrance hall to the artist’s apartment in New York.

The exhibition at Bildmuseet is Do Ho Suh’s first solo exhibition in Scandinavia. It runs from 17 November to 15 April, 2018. Curator: Katarina Pierre, Bildmuseet. Our thanks to Lehmann Maupin, New York/Hong Kong and Victoria Miro, London.