NEWS The study of “sexual conflict” between males and females helps us to understand why sexual reproduction persists given that it can be costly, especially to females. One aspect of this conflict concerns how females respond to increased mating events that are of more benefit to males than to themselves. This work on traumatic insemination was conducted by Umeå University researcher Tom Cameron together with colleagues at the University of Leeds. The results have been published in Biology Letters. 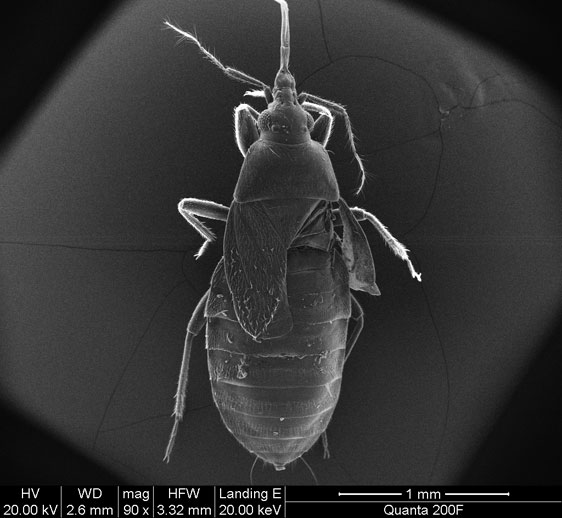 Imagine a male that instead of mating conventionally, takes the awkward step of piercing and penetrating his mate through her body wall. This mating behaviour is known as traumatic insemination and it potentially comes at a great physiological cost to the female.

Traumatic insemination is known across several insect lineages and is thought to have evolved due to the increased reproductive success of males that employed it. This is because males are able to avoid female control of fertilisation. It is, as you can imagine, thought to be very costly to female survival and in recent years scientists have identified unique counter adaptations in female physiology that reduce the costs imposed by traumatic insemination. This includes evolution of completely new organs to help prevent infection through this mating method.

The investigation showed that despite the clear differences in taxonomy, evolutionary history, mode of predation, size and position of entry, pirate bugs largely respond in the same way as other taxa that employ traumatic insemination such as the parasitic bedbug (Cimex lectularius).

"We found that multiple mated females die young, but they make up for it by laying more eggs each day," says Dr. Cameron.

Whether this behaviour is adaptive on the part of the female or is manipulation of the female by the male via chemicals introduced to her via sperm transfer remains to be explored.

Dr Tom Cameron, Department of Ecology and Environmental Science Tel: +46(0)9-786 57 81, +46 (0)73-84 28 018
E-mail: tom.cameron@emg.umu.se
Homepage: http://www.emg.umu.se/english/about-the-department/staff/cameron-thomas/
Caption: Scanning Electron Microscopy still image of a mated female bug. Wings had to be removed to look for mating wounds, which are found on the upper right area of the abdomen.